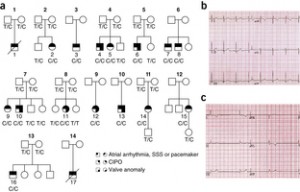 In 2008, I wrote about the case of Mr. and Mrs. George Fry, who are believed to have brought a particularly negative mutation with them to the New World from Europe in 1630 (“A Single Colon Cancer Gene Traced to 1630 – The Future of Genetic Genealogy?“). The mutation – in the APC gene – increases the likelihood of colon cancer, and has been found in many of the Fry’s living descendants.

In this months’s issue of Nature Genetics (see “Mutations in SGOL1 cause a novel cohesinopathy affecting heart and gut rhythm“), researchers using the BALSAC Population Database traced a founder mutation in SGOL1, which causes Chronic Atrial and Intestinal Dysrhythmia, termed CAID syndrome. So not only is it interesting that the same gene is involved in both heart rhythm and intestinal rhythm, but that the DNA has been mapped to this ancestral couple. The couple, whose names were not provided, were married in France in 1620 and arrived shortly thereafter in Nouvelle France.

Even more interesting, the researchers have found the same mutation in one Swede, and they believe that the mutations have the same origin, showing genetic flow from Scandinavia to France. I haven’t yet the read the paper so I can’t comment on their hypothesis of a single origin.

For more information: “Discovery of a novel heart and gut disease: The genetic mutation involved would date back to 12th century Vikings.”

Here is the Abstract from Nature Genetics:

The pacemaking activity of specialized tissues in the heart and gut results in lifelong rhythmic contractions. Here we describe a new syndrome characterized by Chronic Atrial and Intestinal Dysrhythmia, termed CAID syndrome, in 16 French Canadians and 1 Swede. We show that a single shared homozygous founder mutation in SGOL1, a component of the cohesin complex, causes CAID syndrome. Cultured dermal fibroblasts from affected individuals showed accelerated cell cycle progression, a higher rate of senescence and enhanced activation of TGF-β signaling. Karyotypes showed the typical railroad appearance of a centromeric cohesion defect. Tissues derived from affected individuals displayed pathological changes in both the enteric nervous system and smooth muscle. Morpholino-induced knockdown of sgol1 in zebrafish recapitulated the abnormalities seen in humans with CAID syndrome. Our findings identify CAID syndrome as a novel generalized dysrhythmia, suggesting a new role for SGOL1 and the cohesin complex in mediating the integrity of human cardiac and gut rhythm.