I’ve added a new page to the blog called “Featured Articles“. It’s available 24/7 at the top of every page, and contains a categorized list of about 50 of my favorite articles from the last year. These posts are listed under categories including “Popular Articles”, “Personal Genomics”, “Learning About Genetic Genealogy”, “Ethical Issues”, and “Famous DNA”. This easy-to-read format is much easier to navigate than the clumsy “Categories” column in the right sidebar, which returns too many results in no apparent organization. If you’re relatively new to The Genetic Genealogist, you might find some interesting articles that you missed the first time around. Happy reading! ... Click to read more!

An Updated Y-DNA Tree at ISOGG

MAY 04, 2008 – The 2008 version of the ISOGG Y-DNA Haplogroup Tree is now available online: http://www.isogg.org/tree/. New to the tree is a haplogroup conversion table which is downloadable in MS Word. If you do not have MS Word/MS Office, you can download openoffice.org for a compatible word processing program. Appreciation goes to Richard Kenyon and Charles Moore for their work on compiling this table. ... Click to read more! 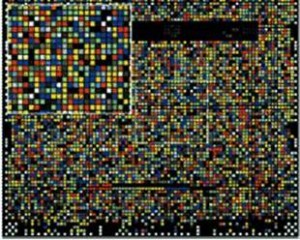 Although the genome scanning services offered by companies such as 23andMe, deCODEme, and SeqWright have been front and center in the press the last few weeks, I’m sure that the following information will not be included in any of the reports.

Two different sources have concluded that the scanning service offered by 23andMe and deCODEme, who use different types of Illumina SNP Chips, are highly reproducible. In January 2008, Ann Turner compared the results of testing at deCODEme and 23andMe, and concluded that of the 560,163 SNPs that overlapped and had a “call” (meaning there was a measurable result), they agreed on 560,128 and disagreed on 35. Ann wrote in January:

In all of [the disagreed calls], one company would make a homozygous call while the other company made a heterozygous call – there were no cases where they made a completely discordant call. All in all, I’d say that is pretty impressive. ... Click to read more!

Last week I received a press release announcing the creation of a non-profit organization to raise and disseminate funds to increase original research in genetic genealogy testing (some of which will undoubtedly be reported in the open-source Journal of Genetic Genealogy). The DNA Fund also has a blog, available here. Following is the press release:

SALIDA, CA â€“ The DNA Fund, (www.dnafund.org), a new non-profit organization has been established to fund DNA testing scholarships and grants for ancestral DNA studies. Currently in Phase 1 of the Fundâ€™s launch, testing monies will be raised through fundraising affiliates. Scheduled for Phase 2, the Fund will accept donations and in Phase 3, coordinate grants for DNA projects and studies. ... Click to read more!