Both 23andMe and deCODEme (using my 23andMe data) have interpreted my SNP results to indicate that I have a greatly increased genetic risk for Type 2 Diabetes.  This post interprets the information from both companies and applies some of the primary research that the companies relied upon to predict my risk.  Hopefully, this information will be useful to me as I strive to more completely understand my own risk factors, and will be useful to others as an example of using SNP data to potentially understand more about your health.

My 23andMe analysis makes it clear that I have an elevated risk for type 2 diabetes:

And, upon clicking upon the link, I receive the following additional information: 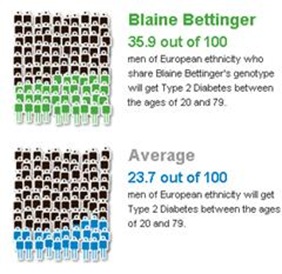 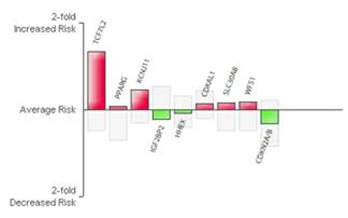 deCODEme, which used my 23andMe data, provides a similar interpretation: 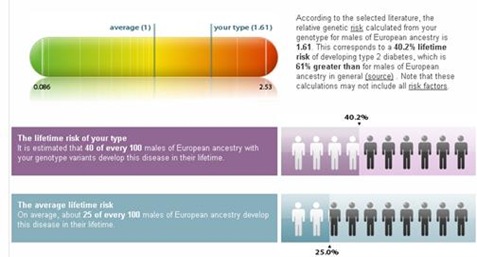 Three of the major risk alleles analyzed by both 23andMe and deCODEme are the following (with my genotype for each allele).  There are others, but interestingly these three have been examined together in several studies.

(note that the rs5219 SNP – which is the risk allele from numerous research studies – is 90% correlated with rs5215, which is the SNP tested by deCODEme, so keep this in mind if you tested with that company).  You can learn more about the other two SNPs at SNPedia (rs7903146 and rs1801282).  EDIT – a previous version stated that 23andMe tested the correlated rs5215 SNP; that was incorrect.  23andMe does test the rs5219 SNP.

As you can see, from the six possible risk alleles for the above three SNPs, I happen to have all six!

“An alternative way to assess the impact of susceptibility alleles on disease risk is to use positive predictive values. Assuming a background risk of 5% in the general population, the probability of people with zero risk alleles developing type 2 diabetes is 2% compared to 10% for people with all six risk alleles.”

Not surprisingly, I have a strong family history of type 2 diabetes. I won’t give any further specifics to preserve anonymity (as much as this has already revealed half the genotype of each of my parents), but I can say that type 2 diabetes has had – and continues to have – an impact on close relatives.

So what does this all mean? And why post about such a personal issue?

Further, this post is my attempt to rebut the notion of genetic exceptionalism, the idea that genetic information is somehow different from other types of personal information and thus requires an increased level of scrutiny and/or protection. For me personally, interpreting my genotype is no more dangerous than the receiving the results of a home glucose test. Indeed, the results of the glucose test represent a current reality while the genotype merely suggests a future possibility.

The fact that I’m not afraid of my genetic information, or that I don’t believe in genetic exceptionalism, doesn’t mean, however, that I should ignore my genotype.  In my case, my genotype has reinforced and added to my understanding of my diabetes risk, and it would be foolish to waste this opportunity to shape my future.

Time to hit the gym.