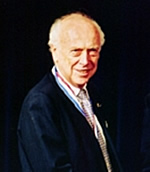 Admit it, you’re dying to get your hands on Watson’s genome, aren’t you? Who isn’t?! Yesterday James Watson was handed his sequenced genome on DVD from 454 Life Sciences. There’s a great press release from the Baylor College of Medicine where the ceremony took place.

In a very big day for genetics and human beings alike, Watson was the first person to be handed his entire genetic sequence (for those in the know, Venter only received some or most of his sequence according to most sources).

Amazingly, according to the press release, the genome was sequenced over two months for $1 million. Incredible, considering the Human Genome Project took years and billions of dollars, and even Venter’s project took $300 million.

The article is very interesting, and I took the following quote:

“A report on the project and a commentary on its ethical implications are scheduled to appear in the near future. The raw sequencing data was released today to the publicly available resource called GenBank National Center for Biotechnology Information Trace Archive.”

“Watson, who chose BCM as the site at which the data transfer will take place, plans to evaluate the information included in the genome and write about its significance to him, his family and the future of genetic medicine at a later time.”

In the right sidebar there’s video of the presentation, biographies, and links to more information. I’m really looking forward to the genome-mining that I hope is taking place even as we speak! By the way, I put ‘almost’ in the title because Watson didn’t want to know about his own ApoE4 gene.