Most genetic genealogists are very familiar with Bryan Sykesâ€™ Seven Daughters of Eve, the 7 â€œclan mothersâ€ (Ursula, , , Velda, , Katrine, and Jasmine) from whom the majority of Europeans are believed to obtain their mitochondrial DNA. Note that there are many more â€œclan mothersâ€ located throughout the world â€“ I, for instance, am descended from clan Aiyana.

The exhibition was commissioned by Professor Bryan Sykes, the head of Human Genetics at and the founder of Oxford Ancestors. Prof. Sykes met Ms. Plougmand-Turner by chance when he was taking DNA samples from villagers at Longleat.

“Ulla happened to be visiting and so I also tested her. We discovered that we both descend from . Our backgrounds are very different but we had an immediate rapport.

“It affected the texture of the paint. The mDNA spreads like strands of string. Brian had given particular colours to each goddess. I am and my colour is burnt yellow, Jasmine is red and Velda a striking purple. We mixed each shade with the DNA from descendants of each clan mother. I was careful to use seven different sets of brushes so that the DNA in each picture would not be contaminated.

Here are a few of Ms. Plougmand-Turnerâ€™s “Daughters of Eve” paintings: 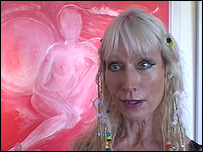 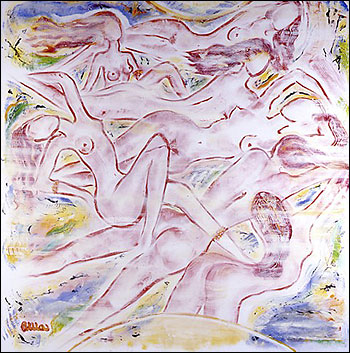 The Seven Daughters of Eve exhibition continues at , , until June 22. The paintings are not for sale as they will be displayed at the offices of Oxford Ancestors following the exhibition. Prints of the paintings are available from the in , Abingdon, or from the Galleryâ€™s website.

There is more information at the BBC, the Telegraph, thisisoxfordshire, and the Oxford Times.

Thanks to John Hawks [through Hsien at EyeonDNA]!