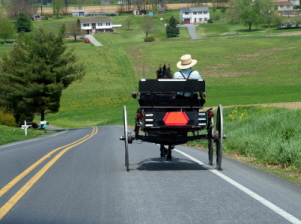 The Amish/Mennonites and Genetic Disorders

The Amish migrated from Europe (Germany/Switzerland) to the United States in the 1700s. One such group, the Old Order Amish of Lancaster County, Pennsylvania, began with 200 Swiss immigrants. Today, there are roughly 200,000 Old Order Amish. Because of the difficult lifestyle, the lack of evangelism, and the language barrier, there is essentially no conversion to the Amish religion. In addition, marriage outside the community is forbidden. As a result, the community has remained closed for over 10 generations and is still using the same 200 genomes of their founders! This is known as founder effect, which means that a population is started by just a small number of individuals and as a result that new population will be different (both genetically and phenotypically) from the parent population, potentially with low genetic variation.

If I were to sequence the genomes of 200 individuals that I had somehow randomly selected, I would undoubtedly uncover a number of undesirable mutations hidden in their genes. Most of these mutations would not cause any detectable phenotype because these individuals would still have a healthy copy of the mutated gene (for the DNA newbies, we all carry 2 sets of 22 chromosomes plus 2 sex chromosomes, meaning that we have two copies of most genes).

Within the Amish populations, the mutated gene perpetuates and flourishes because it is never diluted into the general public. This means that it becomes increasingly likely that two individuals, both carrying a copy of the mutated gene, will marry and produce offspring. These children then have a random chance of inheriting two mutated copies of the gene.

A recent article in USA Today, “Blue glow signifies life in peril in Pennsylvania Dutch country” analyzes the effect of one of the genetic diseases threatening the Amish. Crigler-Najjar syndrome is extremely rare, with only about 110 known cases in the entire world. Almost 20% of those cases are among the Amish and Mennonite in Pennsylvania.

People with Crigler-Najjar syndrome are unable to break down bilirubin, a natural waste product from old blood cells, and it builds to a toxic level in their blood. Untreated, the condition leads to brain damage and death. The afflicted, with yellowed eyes and golden skin as a result of their condition, are forced to spend 10 to 12 hours a day in bed underneath bright blue lights. These beds cost about $1,000, and fans must be used to keep the children cool under the intensity of the lights. Although there is no cure, a liver transplant is one option.

The Clinic for Special Children

In 1990 a clinic opened in Straburg that specialized in children with rare diseases. The Clinic for Special Children was founded by Dr. Holmes Morton, who once worked with Dr. John Crigler, the physician who first described Crigler-Najjar syndrome in 1952 with Dr. Victor Najjar. The building, located on a site that was once an Amish field, was erected by 70 local men in the traditional barn-raising manner.

The clinic treats about 600 children for 80 different genetic disorders or syndromes such as glutaric aciduria (GA1), maple syrup urine disease (MSUD), Crigler-Najjar syndrome (CNS), and medium-chain acyl-CoA dehydrogenase deficiency (MCADD). Not all the children are Amish; about 15% of the caseload come elsewhere, including Africa and Asia. About 75% of the children are treatable and a third of those are highly treatable, many through techniques developed at the center

There’s a great brochure available that provides an in-depth description of the Clinic. In 2006, Dr. Morton was awarded a MacArthur Foundation “genius grant” for his work. A well-deserved honor, if you ask me. Here is a list of some of the publications associated with the Clinic for Special Children. Here are some other articles about the Clinic, including the Genome News Network, the New York Times, Scienceline, Affymetrix, and here. For more information about the Amish/Mennonites and genetic disorders, see this brief review by Laura Weeks (pdf!).

Interestingly, there is a Swiss Anabaptist DNA Project at FTDNA, but unsurprisingly there are very few samples so far. Another interesting source of information about Amish/Mennonite genetic genealogy is the Yoder Family Website, which contains links to DNA testing by members of the Yoder Family.

Hsien at EyeonDNA wrote about this topic at Genetics and Health, and if you read the article, you’ll see that even her “doctorate genealogy” has a link back to Amish studies.