In light of the launch of 23andMe and deCODEme, two genomic analysis companies, I recently asked whether or not my readers were interested in analysis of their own genome. The results suggest that of the people who voted, many were interested in the idea. The poll received a total of 51 votes, and I thank everyone who took a moment to cast their opinion (and I was very pleased with how well PollDaddy worked). Here are the results: 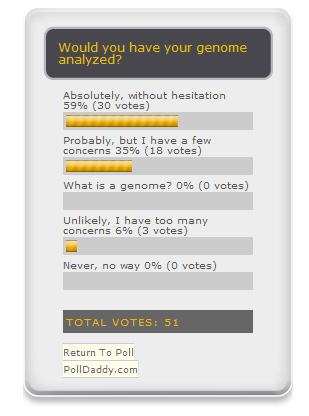 It looks as though many people are interested in genomic analysis, and that a significant number have some concerns that must be addressed or resolved before they would consider it.

bbgm had a poll on his blog, with the results posted recently at “Your Personal Health: Readers Vote Yes“. Again, similar to my results, readers were interested in genomic analysis.