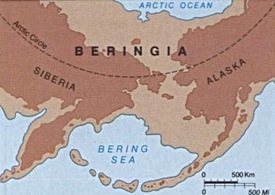 If you’re interested in DNA, Native American History, or genetic genealogy, then you’re undoubtedly heard of a new paper from PLoS ONE called “The Phylogeny of the Four Pan-American mtDNA Haplogroups: Implications for Evolutionary and Disease Studies.” The authors, from all around the world (including Ugo A. Perego from SMGF and Antonio Torroni from Italy) analyze over 100 complete Native America mtDNA genomes. From the abstract:

“In this study, a comprehensive overview of all available complete mitochondrial DNA (mtDNA) genomes of the four pan-American haplogroups A2, B2, C1, and D1 is provided by revising the information scattered throughout GenBank and the literature, and adding 14 novel mtDNA sequences. The phylogenies of haplogroups A2, B2, C1, and D1 reveal a large number of sub-haplogroups but suggest that the ancestral Beringian population(s) contributed only six (successful) founder haplotypes to these haplogroups.”

It should be noted that these results are not considered the last word on the subject, as more sequences and further research is needed. From the paper:

“Our snapshot of the phylogenies for haplogroups A2, B2, C1, and D1 is only partially representative of Native American mtDNA variation, since most likely it only marginally includes the variation of Native American populations from Central and South America.”