Welcome to the September 14, 2008 edition of Gene Genie!Â  Bloggers have begun to pick up posting with the end of summer, and it seems like everyday there’s a bunch of new interesting posts about the human genome.

96well at Reportergene presents “Trends in development of reporter genes.”Â  Reportergene is also looking for bloggers/reporters to join the blog’s community and help create the “main repository of news and tools for reportergenomists.”Â  See here for more information.

fightingfatigue presents Â» Have Japanese Researchers Found Diagnostic Tool for ME/CFS? posted at Fighting Fatigue.Â  According to a study discussed in the article, there might now be a test able to diagnose Chronic Fatigue Syndrome.

Genomes by the Handful

Human genomes are being sequenced by the handful these days.Â  Knome has recently delivered their first sequenced genomes to customers on 8gb USB drives placed in engraved boxes.Â  Additionally, news came last week that the first Arab genome had been sequenced.Â  As Mailund on the Internet asks, is this news anymore? 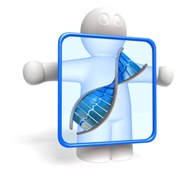 On September 8th, 23andMe announced a reduction in the price of their DNA analysis from $999 to $399.Â  The news was discussed on Dienekes’ Anthropology Blog, Eye on DNA, bbgm, ScienceRoll, and at Geneforum.Â  It even led Attila to buy a kit.Â  The price drop also prompted a great discussion among some of the members of the DNA Network.Â  First, see “Cheap personal genomics: the death-knell for the industry?” at Genetic Future.Â  Andrew at Think Gene writes “23andMe Is DTC Genomics and Nobody Should Be Surprised” and “Why the â€œDatabase Sale Storyâ€ is Silly.”Â  This in turn is mentioned by Steve the Gene Sherpa at “A lot to chew and then spit!“Â  See also my “Follow-Up to 23andMeâ€™s Price Drop.”

Mary Meets Dolly discusses “The marriage gene“, in which an article in the Baltimore Sun writes that “men who lack a particular variant of a gene that influences brain activity are more likely to be devoted, loving husbands and more likely to be involved with women who praise them as emotionally close and available.”Â  Rebecca Taylor mentions that genes are rarely the sole influencing factor in anyone’s behavior.

As a bit of housekeeping, if you aren’t already subscribed to the DNA Network, be sure to note that Daniel’s Genetic Future has moved to Scienceblogs.Â  Update your RSS feed!

Last but not least, news about ancient yeast.Â  Although this isn’t related to human genetics, I did my graduate research on yeast and thought I would indulge a little here.Â  Aminopop mentions that a new brewing company, Fossil Fuels, is making beer with revived 25-million year-old yeast.Â  Apparently, “the ancient yeast provides the wheat beer with a distinctively ‘clove-y’ taste and a ‘weird spiciness at the finish.'”

So ends the 37th edition of Gene Genie.Â  Edition 38 will be hosted in a few weeks.Â  You can submit your blog article for the next edition at the carnival submission form. Past posts and future hosts can be found on the blog carnival index page, or at the official Gene Genie blog!