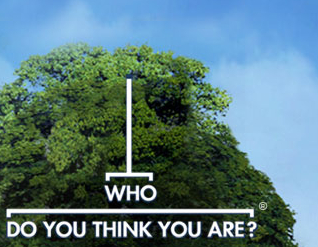 [Update (2/24/12): Some genealogy forums are reporting that callers to Ancestry.com are being told that the autosomal DNA test will publicly launch in approximately 1 month (late March or early April).]

This episode was of particular interest to me because it featured Ancestry.com’s new autosomal DNA testing service, which I’ve written about before (see “Ancestry.com’s Autosomal DNA Product – An Update”). While there wasn’t too much new information about the DNA product in this episode, it was an interesting sneak peek at the service.

In the beginning of the episode, as Mr. Underwood visits with his family to get a start with his genealogy, he shows a DNA collection kit with two long swabs and a mail return envelope. Ancestry.com is using cheek swabs rather than a saliva sample to collect DNA.

Later in the episode, Mr. Underwood reviews his DNA test results with Dr. Ken Chahine (LinkedIn profile), who is described as the “General Manager Ancestry DNA” in the episode. Dr. Chahine has a Ph.D. in biochemistry and a J.D. (very similar to my own background). According to Dr. Chahine, the test Mr. Underwood used examined approximately 700,000 “links” (or SNPs) in the DNA chain.

Mr. Underwood’s results suggested that the DNA examined was approximately 26% European and 74% African, which is a fairly common admixture for African Americans. Under the “European” tab of the user interface, he was described as 20% French/Swiss and 6% German. Under the “African” tab, the results showed 27% Bamoun, 22% Brong, 13% Yoruba, and 12% Igbo (a total of 74%).

Next, Dr. Chahine asked, “Where would we find your closest DNA matches?” In other words, the Ancestry.com autosomal testing service will also include the ability to identify genetic cousins in the database.

The service identified a distant cousin (somewhere around the 10th cousin range) who lived in Cameroon (an Eric Sonjowoh). Mr. Sonjowoh was already in the Ancestry.com database, which is why they were able to compare him to Mr. Underwood. According to Eric, someone approached him in 2005 and asked him for his DNA because African Americans were trying to trace their family back to Cameroon. I’m not sure what database the DNA was in, but it shows that Ancestry.com has pre-populated its database with at least some samples from other public and/or proprietary data sources.

At the end of the episode, Mr. Underwood and his father traveled to Cameroon to meet Mr. Sonjowoh and his family, which was a touching reunion. Although their relationship is extremely distant (perhaps as much as 300 to 400 years), it provided Mr. Underwood with a connection to his roots in Africa.