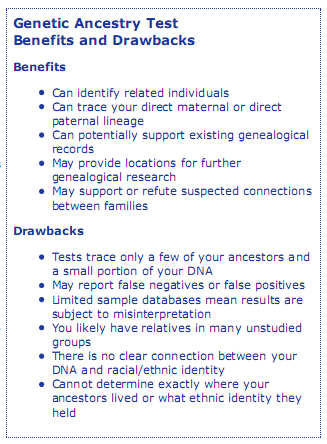 One interesting fact from the article is that the number of people who have purchased genetic genealogy tests is estimated to be over 460,000! If you would like to read more about this study, there are a number of other sources of information, including a press release from The University of Texas at Austin, where the first author, Deborah A. Bolnick, is assistant professor of anthropology. There is also a feature story at The University of Texas’ website. In this feature story, Dr. Bolnick states:

â€œYour DNA is just one of many tools that you can use to confirm what you know, or find out something new about your ancient heritage,â€ Bolnick adds. â€œItâ€™s fascinating that our cells contain information about our history, but we shouldnâ€™t privilege genetic data over our personal, cultural experiences.â€

Although I applaud the study’s effort to recognize and highlight the positive uses for genetic genealogy, and I respect the authors and the work that they did, there’s nothing new here. The most well-stated and concise reaction to the (oft-repeated) assertion that genetic genealogy has limitations recently came from Megan Smolenyak, one of the most experienced and knowledgeable participants in this field:

â€œSince Iâ€™ve been watching this same formula repeat itself since 2001, Iâ€™ve developed a pet peeve about the built-in, patronizing assumption that genealogists are too dense to understand the fundamentals of what DNA can and canâ€™t do â€” rather than the reality that weâ€™re pioneers delighted with the prospect of learning what had previously been unknowable and well aware of the limitations.â€

Genetic genealogy DOES have significant limitations and it IS vastly important to inform customers about them, but it is also important to recognize that many many genetic genealogists embrace these tests in full knowledge of the limitations. Our personal experiences, oral memories, and written documents can only reveal a small part of our ancestral history. Genetic genealogy, as the vast majority of individuals recognize, adds another small piece to the ancestral puzzle.

Again, let me reiterate that the more consumer education there is the better. There is no such thing as too much consumer education, and a number of the genetic genealogy companies could do quite a bit more to educate their customers before and after a test is purchased and run. I do wonder, however, about some of their conclusions about the dangers of a mis- or un-informed consumer base. First, they hypothesize that test-takers may change how they report their ethnicity on governmental forms or other applications, making it more difficult to track the social effects of race. Second, they state that “attitudes toward genetic research could change” and “support for molecular and anthropological genetics might decrease”, while “historically disadvantaged communities might increase their distrust of the scientific establishment.”

My concern is that they are significantly overstating the potential effects of an uninformed customer base. Let’s look at the numbers – Assuming for the sake of easy calculations that every single one of the 460,000 people who have experimented with genetic genealogy were in the United States, this would only be 0.15% of the population. Additionally, I would posit that a majority of participants are happy with the experience. So now we’re talking far less than 0.15% of the U.S. population who might adversely impact the field of genetics because of genetic genealogy. Although genetic genealogists are an active and vocal bunch, I don’t think they have the power to make the changes the researchers enumerate. If there were that many participants, and if they had that much leverage as a group, maybe I would get more visitors to my blog!

On the contrary, I believe that genetic genealogists ADVANCE the field of genetics.

Genetic genealogists embraced genetic testing long before it was the norm, before the exploding fields of personal genomics or personalized medicine. Genetic genealogists have created listserves and mailing lists to further their understanding and promote the field; they have funded, authored, and published their own scientific and statistical studies which have added to human genetic knowledge; they have published books to help others understand the science, the limitations, and the benefits; some have even started blogs.

Genetic genealogists are genetic pioneers. Most of us understand the limitations of the science, and thank our DNA for the opportunity to peek into our past.