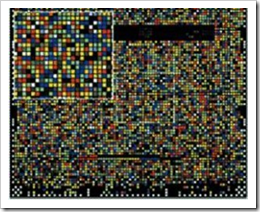 Interesting results, and as Kelly at TGS points out, “This is why sharing results is so valuable and a key to great quantified self understanding.” For anyone who might be interested in doing further comparison, here is Oliveira’s list (also available here):

For everyone not familiar with SNPs, or Single Nucleotide Polymorphisms, see this brief introduction at Wikipedia, including the helpful diagram, or read the SNP Page at SNPedia (which links to a helpful YouTube video).