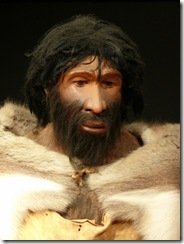 On Thursday May 9th, Svante PÃ¤Ã¤bo spoke at the Biology of Genomes meeting at Cold Spring Harbor Laboratory. PÃ¤Ã¤bo’s group, along with 454 Life Sciences, is currently engaged in a project to sequence the Neanderthal genome. The researchers have been able to sequence the complete Neanderthal mtDNA genome with 35-fold coverage. The genome is approximately 16 kilobases long and differs from the CRS at 133 positions. From what I’ve been able to find online, it doesn’t appear that the actual sequencing results have been released to the public. Given current estimates of mtDNA mutation rates, the number of differences between human and Neanderthal mtDNA suggests that the branches diverged approximately 600,000 years ago.

Although there have been accusations that Neanderthal sequencing is often contaminated by human DNA, the concerns have been addressed by PÃ¤Ã¤bo’s group. From the article:

PÃ¤Ã¤bo mentioned that about 10 percent of the DNA library they initially sequenced â€“ data they published in late 2006 â€“ consisted of modern human DNA. But over the last two years, they have been guarding against contamination by generating DNA libraries in a clean room and by barcoding the Neandertal DNA.

The ISOGG has a page devoted to Neanderthal DNA for more information.