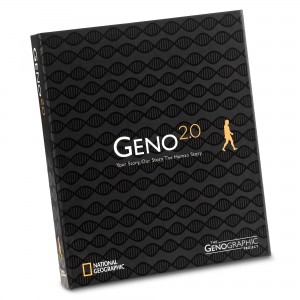 Today, The Genographic Project officially announced the launch of their new Geno 2.0 project, a significant update to the type and quantity of genetic information that will be collected and analyzed by The Genographic Project.  The new project will use an entirely new SNP chip (the GenoChip) designed specifically for Geno 2.0 in order to provide the world’s most detailed information about Y-DNA and mtDNA haplogroups (using SNP information) as well as detailed biogeographical estimates and ancient population (Denisovan and Neanderthal) estimates.

As of today you can pre-order a Geno 2.0 kit, which is expected to ship no later than October 30th (although you can probably expect it earlier than that).

Once again Family Tree DNA will perform all the testing, and The Genographic Project has worked very closely with FTDNA to design, troubleshoot, and use the GenoChip.  FTDNA will perform both the Family Finder and the Geno 2.0 test.

The AIMs (Ancestry Informative Markers) were derived from roughly 450 populations around the globe, including many that are unique to the Genographic project and many that have never been previously searched for AIMs.  The SNPs in regions believed to represent Denisovan and Neanderthal interbreeding will be used to detect and study DNA flow between humans and these extinct populations.

So what do you get when you order a Geno 2.0 test? Via the new user interface (some of which you can see below), you will receive the following:

One interesting aspect of the new Geno 2.0 chip is that it will completely replace the deep-clade analysis performed at FTDNA.  With this one test, all SNPs currently analyzed by FTDNA in all of its different deep-clade analyses are analyzed in their entirety.

Another great benefit of the Geno 2.0 test is that Genographic will allow the test-taker to upload/transfer their results back into FTDNA, and neither Genographic or FTDNA will charge a fee for this transfer.  This means that Project Administrators will be able to work within the FTDNA system to analyze results of their project members rather than having to rely on collecting data from project members outside the system (thereby potentially increasing participation and results).

The designed GenoChip has undergone significant validation (including the use of  about 400 known Y-DNA and mtDNA samples, and as many as 650 samples from various populations around the world).  Following this validation process (which will continue for at least the foreseeable future), the validated GenoChip SNPs are as follows:

The test-taker’s raw data will be available for download by the test-taker.  This has happily become the norm for most genetic genealogy companies, and NG will follow suit.  It’s not clear at this point whether that will be an immediate functionality (although I’m guessing it will be), or whether it will be in the near future.

Interestingly, the ability to download raw data opens the door for third-party analysis.  For example, I data from the Geno 2.o chip will lead to significant new mtDNA and Y-DNA discoveries (using the user-fueled Y-Chromosome Genome Comparison project, for example).

During a presentation put on by Spencer Wells and FTDNA a few weeks ago describing the new Geno 2.0 project, I and several other DNA bloggers were able to ask questions about the new chip and the project.  I and a few others asked questions about consent, which is of course an important aspect of any research project involving human samples.

Specifically, I asked whether all test-takers are automatically participants in the research aspect of the new Geno 2.0 project.  Dr. Wells responded that test-takers must opt into research; they are not automatically research participants.  Accordingly, people who are interested in the new test but have concerns about participating in research can do so.

Several other bloggers will be writing about today’s launch, and I will update this post to include links to those reviews.  Also, since I will be taking the Geno 2.0 test in the near future, stay tuned for my review and results.

Below are a series of screenshots from the new Geno 2.0 project and test results, provided by National Genographic:

The complete kit (collection is by cheek swab): 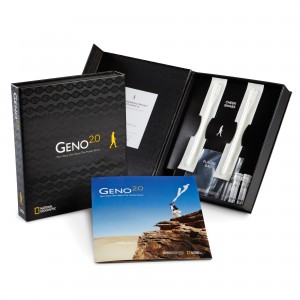 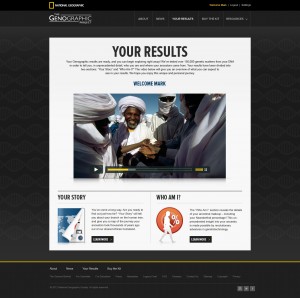 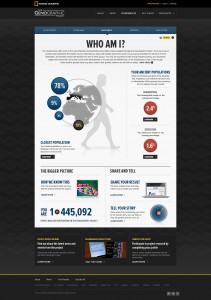 An mtDNA haplogroup and heat map (showing modern-day locations and frequencies of the haplogroup): 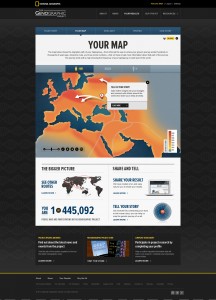 The “Your Story” main page: 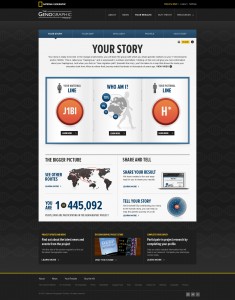 An example of more information at the “Your Story” page: 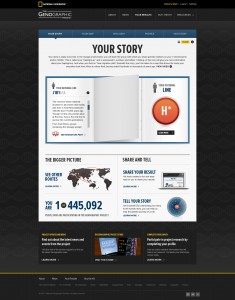 The “Your Map” page (showing an mtDNA map): 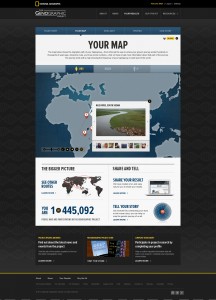 More of the “Your Map” page (showing an mtDNA map): 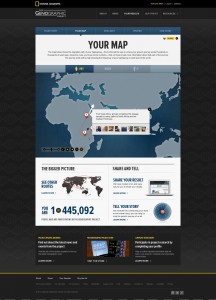 NOTE: much of this information is based on preliminary information about the GenoChip and Geno 2.0 project.  Accordingly, the information is subject to change. Check The National Genographic website for the latest information.