Short Summary: Before the end of the year, AncestryDNA plans to update our match lists using a new algorithm that reduces the number of false positive matches. For the first time, matching DNA segments will be characterized as IBS (i.e., a false positive) based on something other than simply segment length.

I would like to thank Ancestry.com for reaching out to the genetic genealogy community, for organizing this event, and for allowing us to share information with our readers. I think this is the start of a very positive line of communication and collaboration, and I look forward to the future.

Currently, identifying genetic cousins is far from a perfect process. Many of our “matches” are actually false positives, meaning that the two or more individuals share a segment of DNA in common for a reason other than via recent inheritance from a common ancestor. For example, they could share a segment of DNA as a result of being a member of a particular population rather than due to a recent common ancestor, or that could actually not share the segment of DNA (for example, matching that results from a lack of phasing or errors in phasing, among other reasons).

With this in mind, there are currently several ways to reduce the number of false positives:

Many false positives result from the lack of phasing (see the figure below). Although using DNA from family members (such as a “trio” or “triad” of a child and two parents) is the best way to phase a genome, researchers have long been phasing genomes using large datasets and algorithms (see the software list HERE and an aging review article HERE). While not perfect, this method of phasing reduces the number of false positives that result from unphased data. Unfortunately, phasing individuals using data from family members is both computationally expensive and not very scalable. 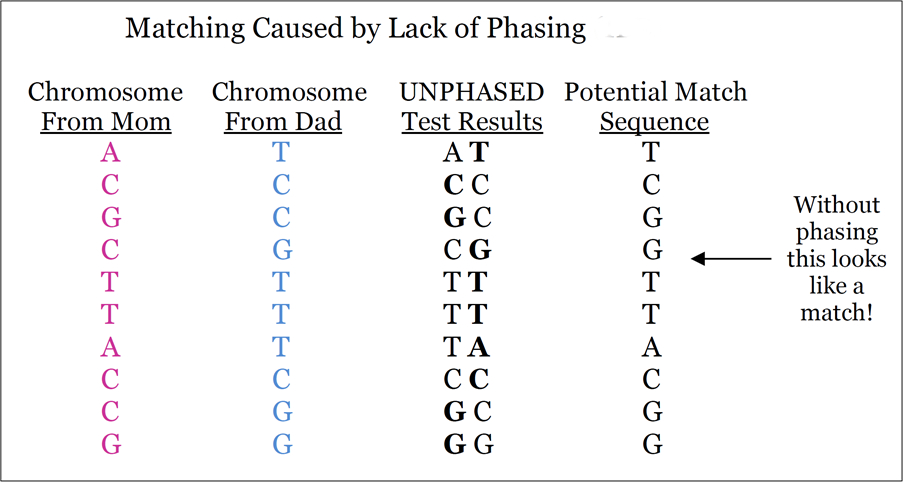 AncestryDNA has been working on improvements to their phasing algorithm, which will be a component of the update later this year. The new algorithm reduces the error rate by as much as 66%, and I expect to see further improvements as the database grows.

23andMe, for example, sets a minimum threshold for a first segment of 7 centiMorgans (“cMs”) and 700 SNPs. AncestryDNA has a threshold of 5 cMs for the first shared segment. Family Tree DNA sets a threshold of 7.7 cMs for the first segment. In other words, two individuals must share at least one segment of DNA that satisfies the minimum threshold set by the testing company in order for the individuals to be considered genetic matches.

Unfortunately, there is insufficient data regarding the relationship between segment size and IBS versus IBD. Earlier this year, 23andMe published research entitled “Reducing pervasive false positive identical-by-descent segments detected by large-scale pedigree analysis” that describes an open-source algorithm called HaploScore. HaploScore provides a metric by which to rank the likelihood that a stretch of DNA is inherited IBD between two individuals or not. In the paper, however, the researchers determined a false positive rate of over 67 percent for short (2 to 4 centiMorgans) segments of DNA. In other words, for every 4 cM segment shared by two individuals, there is a 67% chance that the segment is IBS rather than inherited from a common ancestor. Based on Figure 2(b) of the paper, it appears that the false positive rate for 5 cM segments is approximately 30%.

The “Autosomal DNA statistics” page at the ISOGG wiki provides some estimates of IBS v. IBD based on length, although neither the underlying data nor the method used to obtain this information were shared. This data suggests that a shared segment of DNA having a length of 5 cM has a 95% chance of being IBS. In other words, for every 100 five cM segments, only five might be real. Again, however, the method and dataset have not been peer-reviewed (and the results do not align well with the paper discussed in the previous paragraph).

Accordingly, there is certainly a relationship between length and IBS versus IBD, and while the companies set a threshold in an attempt to reduce false positives, length alone is not sufficient to weed out all false positives. Indeed, some have reported from their analysis of their own triad that even rather long segments – on the order of 10 cMs or longer – are false positives.

NOTE: the following information is based on my understanding of the new matching algorithm. There will be a white paper that is released later this year along with the update, so please read that white paper for the official details and explanation. Further, please note that these figures below are research data and won’t necessarily be a part of the user experience once the matching algorithm is implemented.

In order to reduce false positives that fall above the matching threshold, AncestryDNA has leveraged the immense amount of information about allele frequency in their database in order to modify their matching algorithm.

For example, below is a graph of the number of genetic matches (Y-axis) that share a particular segment of DNA in my genome (X-axis). What you will immediately notice is that at one location of my genome, I share a segment of DNA with 2,500 other people. At two other locations, I share DNA with 300 to 400 people, which is significantly higher than every other segment of my DNA. Unfortunately I do not know where these segments are found within my genome, but I might be able to guess using information from Family Tree DNA and/or GEDmatch (where many of us have noticed these “pileups” previously).

Thus, AncestryDNA is identifying the frequency of certain alleles in the database and using that information to reduce false positives. I certainly don’t want to see those 2,500 matches (at least not if the peak is our only shared DNA), or either of those two groups of 400 matches. I currently match about 9,700 people at AncestryDNA – eliminating the 3,300 false positives in just those three peaks will be a good start.

After applying the allele frequency algorithm to my data, my graph looks like the one below, where at every position along my genome I have fewer than 20 matches. 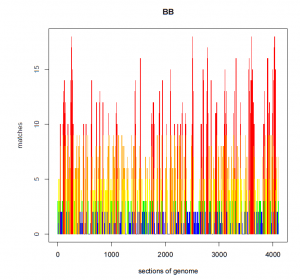 For the first time, matching will be based on a factor other than segment length.

In my mind, there are several important issues that this algorithm raises, which hopefully will be addressed by the white paper that accompanies the update. For example:

The AncestryDNA team expressed interest in making a download of original matches available to users even after the algorithm update. In other words, the download would include a list of everyone that the test-taker ever matched (including the thousands of false positives). Although I believe that using your list would be a colossal waste of time because anyone found in the download and not in your revised match list will be a false positive, I’m not sure that I would recommend against downloading it, at least for now.

Note that there is no guarantee that such a download will be available, it was simply discussed as a possibility, and all the attendees strongly supported the idea.

There is no question that this algorithm will have a significant impact on our match lists. I expect the implementation of this algorithm to reduce matches by as much as 60 to 90%. Accordingly, I expect my matches to go from 9,700 to closer to 1,000 (and possibly even less). I feel very confident that the missing matches will be false positives, although of course I will need to read the white paper in order to further educate myself.

AncestryDNA expects to implement the algorithm and update match lists before the end of 2014.

Before I finish, let me very clear: I want the underlying segment data from AncestryDNA. Although the vast majority of AncestryDNA users would never utilize that segment data, I believe that providing it would lend additional credibility to the product as well as foster greater trust and collaboration between the company and the professional and advanced users. It can do nothing but good. Although there are valid privacy concerns involved (for example if I share a segment of DNA with you and I know that DNA contains a certain disease-causing mutation, I know you likely have the same disease-causing mutation), I am not aware of anyone ever intentionally using segment data to determine a match’s health status. Further, segment data could be an opt-in system or could be shared only after the test-taker reviews and accepts an updated informed consent document. There are a number of ways around the privacy issues.

Even absent the underlying segment data, I believe that the new algorithm is a very good development in the ongoing War Against IBS.

Full Disclosure: AncestryDNA arranged for travel, hotel, and other expenses for this summit. To help cover the costs associated with blogging and my genetic genealogy educational efforts, I offer affiliate links for all three testing companies on the blog.