Below is a graph of DNA shared between a paternal grandmother and her granddaughter, which shows the recombination that occurred at a single generation (i.e., when the father generated a sperm): 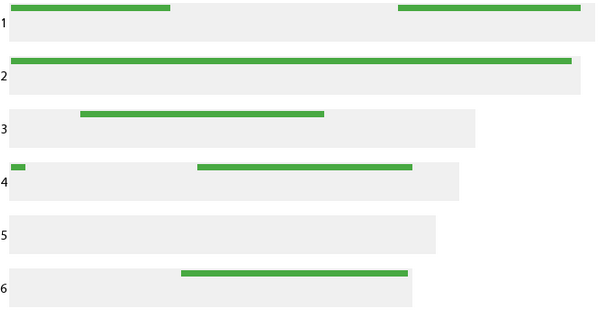 On chromosome 6, there was a single recombination event:

(Note that there may have been recombination between SISTER copies of chromosome 2, but that would be undetectable).

Importantly, the DNA from the grandmother that wasn’t passed on due to recombination is now lost to the grandchild and future generations (unless it comes back in from other lines). For example, none of the granddaughter’s descendants will inherit DNA from her grandmother’s chromosome 5.

As I noted before, we often talk about DNA being “broken down” or “broken up” into smaller pieces that are inherited. This can be a bit misleading if it is interpreted by a reader to mean ‘a single segment is broken into multiple small segments by recombination.’ While technically every recombination event breaks a segment into a smaller segment, it does not weave back and forth multiple times between nonsister chromosomes. Indeed, with an average of just 2-3 recombination events for chromosome 1, we don’t see recombination that looks like this:

There would have had to be 12 recombination events to create the graph above, most of which were just a few cM apart. While not necessarily biologically impossible (with genetics I often feel like almost nothing is impossible!), it is statistically improbable based on the studies that have been completed to date. In order to conclude that the recombination like the above has occurred, we would have to scientifically eliminate every other possibility with some confidence, particularly ones that are more easily explained (IBC or ancient IBS segments, or gaps in sequencing, or matching errors, for example). And given the very high rate of false positives resulting from either IBC or ancient IBS, this is extremely hard to prove with any confidence.

Getting Smaller – The Next Generation

At the next generation, the granddaughter’s paternal chromosome 1 can be further “broken down” into smaller pieces when she passes it on to her children. As just one example, see the below:

Here’s another example where recombination created a small piece of DNA on this chromosome:

And this is how DNA segments can get smaller from one generation to the next.

But importantly, we CANNOT see the following:

There aren’t many graphs available out there that clearly show recombination events, but here are a few links:

Feel free to leave more links in the comments.