In addition to the oft-discussed start-up company 23andMe, a least one other personal genomics company has announced its intention to offer sequencing and analysis to consumers.Navigenetics, based in , describes itself as:

â€œ[A] privately held company offering personalized, genetics-based consumer health and wellness services to our members. Our founders and advisors include leading genetic scientists, physicians, genetic counselors, bioethicists, patient advocates, health policy and technology experts and a management team that has launched some of the most successful online health and information resources of our time.â€ ... Click to read more! 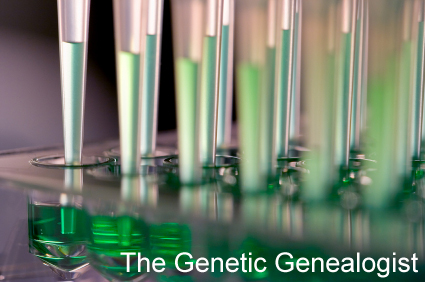 Would you like your genome sequenced in a matter of hours for under $100?

An article from GenomeWeb last week, â€œComplete Genomics, BioNanomatrix to Use $8.8M NIST Grant to Develop ‘$100 Genome’ Platform,â€ reveals that BioNanomatrix and Complete Genomics have partnered together to share an $8.8 million grant from the U.S. National Institute of Standards and Technology to â€œdevelop technology that will be able to sequence a human genome in eight hours for less than $100.â€

From the article (donâ€™t worry, I have no idea how these technologies really work either):

The DNA Ancestry Blog has a new post about needs and concerns regarding Ancestry.com’s DNA project. If you have something insightful or valuable to share, the post lists an email address.

There’s a relatively new Genetic Genealogy blog called Haplogroup I which has some interesting information and news about the field. Welcome to the blogosphere, and I hope to learn more about you and about Haplogroup I!

The big news (ok, not really) in Genetic Genealogy this week is that Ben Affleck is joining the Genographic Project. The Boston Globe has a story here. My favorite part was the ending:

As with any other test, the project did lead to some bragging rights. Ramiro Torres, who hosts a morning show on radio station Jam’n 94.5, was pleased to learn his enterprising relatives trekked across all of Asia before crossing the ice bridge and populating North and South America. ... Click to read more!

Megan Smolenyak at Megan’s Roots World has some great links to recent news about genetic genealogy.Â  The first post is “Genealogical Round Up“, and the second is “More Genetic Genealogy.”Â  If you’re interested in GG, stop by.

I also saw a recent story in the IndyStar called “Unearthing Their Roots“, about African Americans using DNA in an attempt to identify their ancestral origin.Â  Although this exact topic has been very popular in the press this year, this article is more balanced than some.

By the way, I would like to remind everyone that Roots Television is a great resource for anyone who might be interested in genetic genealogy, or genealogy in general.Â  I especially enjoy seeing interviews and presentations from conferences that I am unable to attend.Â  It’s a wonderful resource. ... Click to read more!

A lot of people write me to ask me questions about genetic genealogy, and a few have asked if there are any books on the subject that might help them learn more about it.Â  I thought I should provide a list of great reading material to help someone who might not have time to ask (but keep the questions coming!).

Great beginner books which are specifically about genealogy and DNA:

Trace Your Roots with DNA: Use Your DNA to Complete Your Family Tree by Megan Smolenyak and Ann Turner (Published October 7, 2004):

The Seven Daughters of Eve: The Science That Reveals Our Genetic Ancestry by Bryan Sykes (Published July 9, 2001):

Ancestry.com has established a new blog, located at blogs.ancestry.com.Â  Let me just say that they have excellent taste in WordPress themes (it’s the same as mine)!

1.You got those big blue eyes from your grandmother, but chances are you inherited less desirable genes as well.We inherit our DNA from our parents, who inherited it from their parents.Since we all possess genes that can cause or contribute to disease, knowing oneâ€™s DNA and family medical history can be a great resource for someone who learns they have a genetic disorder.

2.Full genome sequencing is right around the corner!The X-prize quest for the $1000 genome will lead to efficient and affordable whole-genome sequencing.As commercial companies crop up and compete for customerâ€™s business, leading to even lower prices.

3.Your grandmotherâ€™s DNA contains clues to her ancestry.X-chromosome, mtDNA, and autosomal genealogy tests contain clues to a personâ€™s ancestry, both recent and ancient. ... Click to read more!

I first saw mention of Mike Elgan’s story, “Coming Soon: The Mother of All Genealogy Databases” at Jasia’s Creative Gene (The Google Family Tree?), and then I saw it at the Genealogue (NothingWill Save Us From Boredom).

In the article, Mr. Elgan imagines an enormous future database that combines traditional genealogical records and DNA to link everyone together.Â  Two individuals could then, for instance, search the database to find their closest relationship to each other.Â  My first thought, of course, is of privacy issues and plain old bad genealogical data (of which the internet is full).

I’ve spoken before about the enormous effect that affordable SNP and whole-genome sequencing will have on genetic genealogy. In that previous article, I mentioned a study using SNP analysis to identify a person’s ancestry based on autosomal DNA (all the nuclear non-sex DNA). Another study, released today in PLoS Genetics, used SNP chips to identify SNP markers that are characteristic of a certain ancestral origins. According to the authors:

“We have developed a novel algorithm to identify a subset of SNP markers that capture major axes of genetic variation in a genotypic dataset without use of any prior information about individual ancestry or membership in a population.”

To accomplish this, the researchers:

In todayâ€™s Washington Post thereâ€™s a story about The Boy in the Iron Coffin.This coffin was accidentally discovered by a construction crew in in 2003.Research conducted by the Smithsonianâ€™s discovered that the body inside, still wearing a white burial suit, was that of William T. White, about age 15.William, who appears to have had a heart defect that would have made him sickly, died on January 23, 1852:

According to the article, the body â€œhad been buried in a cemetery that probably belonged to Columbian College, the precursor to , in what is now , and had been a student at the college preparatory school when he died.â€ ... Click to read more!