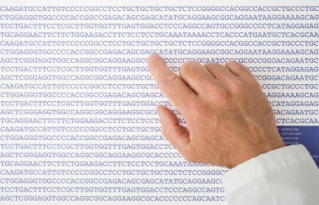 Itâ€™s always been my belief that personal genetics (inexpensive whole-genome analysis) will bring about some exciting changes in the field of genetic genealogy. One of the biggest areas of change will undoubtedly be in the area of autosomal genetic testing. (Remember that autosomal testing examines nuclear DNA, which is DNA other than mtDNA, Y-DNA, or X chromsomes).

A new study takes one of the first steps in the genetic genealogy revolution by examining SNP variations in four self-identified American populations â€“ European, Latino/Hispanic, Asian, and African American (see reference below). â€œThese population labels were used, despite the controversy surrounding the correspondence between notions of race and population structure inferred from explicit genetic data, because they are the labels used by NIH, FDA, and many, if not most, biomedical researchers.â€ The researchers sequenced the exons and flanking regions of 3,873 genes from 76 unrelated individuals.

SNPs common in one population were frequently not common in other populations. â€œMoreover, SNPs that were common in two or more populations often differed significantly in frequency from one another, particularly in comparisons of African Americans versus other populations. These findings indicate that even if the bulk of alleles underlying complex health-related traits are common SNPs, geographic ancestry might well be an important predictor of whether a person carries a risk allele. â€œ

â€œA frequent claim about human population structure is that most common variation is shared among all populations. This, of course, depends on how population boundaries are defined, but often cited to support such comments are the comparisons of SNP frequencies in pairs of populations in the HapMap data and the Perlegen data. Analyses of these data indicated that common SNPs were frequently both shared and common among populations of predominately African, Asian, and European ancestry. However, population genetic analysis was not the intended goal of either the HapMap or the Perlegen projects, and common, shared SNPs were over sampled by the ascertainment strategies used for each project.â€

Although I still think it is too early for useful autosomal testing, this type of data suggests that there is a bright future for geographic ancestry.