Today, deCODE genetics announced the launch of their consumer genotyping service, deCODEme.deCODEme is the first personal genomics company to launch, and will provide sequencing information about 1 million SNPs for the introductory price of $985.The service has two components:

1.The genotyping of ~1 million SNPs (single nucleotide polymorphisms, or personal differences in the genetic code), and;

2.A secured website for presenting the data obtained from the sequencing.

The official press release from the parent company deCODE genetics, contains some interesting information about the product:

“Through your subscription to deCODEme, you can learn what your DNA says about your ancestry, your body –traits such as hair and eye color– as well as whether you may have genetic variants that have been associated with higher or lower than average risk of a range of common diseases. This information will be continually updated as new discoveries are made. ... Click to read more!

DNA Heritage is offering a special price for former customers of Relative Genetics. The RG Upgrade is

If you were a customer of Relative Genetics and are interested in this opportunity, the upgrade offer is here. 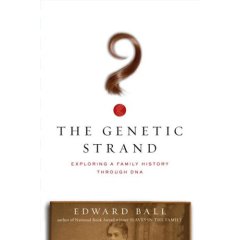 Edward Ball is the author of Slaves in the Family, which won the National Book Award for Nonfiction in 1998. Mr. Ball’s latest book is the subject of this review-by-proxy (I haven’t read it myself, so I’ll be sharing what others have said).

The new book, The Genetic Strand: Exploring a Family History Through DNA, is reported to “intrigue America’s many amateur genealogists and also serve as a cautionary tale.” The book follows Ball’s journey through his family’s genetic genealogy after he discovers locks of hair in an old family desk.

Megan Smolenyak reviewed the book over a week ago at Megan’s Roots World with “The Genetic Strand: Slightly Disappointing.” Megan’s review brings up a number of points, including Ball’s failure to provide some essential information (like his family tree). One of the most interesting critiques, which was also criticized by a review in the New York Post, surrounds the following paragraph: ... Click to read more!

Forty advanced placement science students at Soldan International High School in St. Louis have submitted their DNA for testing with the National Geographic Society’s Genographic project. An article in the St. Louis-Post Dispatch highlights some of the statements made by the students and faculty:

One student, named John, had more reason to be excited about this test than most – his father died when he was only 13. “I never knew him that well,” said the Soldan sophomore. “Maybe this will tell me more about who he was and where he came from.” ... Click to read more!

Update: Ugo Perego is not affiliated withh the website mentioned in the last two sentences.

Did Joseph Smith father children with any of his plural wives? The Deseret News has a lengthy article about recent efforts by a geneticist to answer the long-debated question about the founder of the Latter Day Saint movement.

In order to rule out descendants, it was first necessary to characterize the Y-DNA thought to belong to Joseph Smith. According to the article: ... Click to read more!

The 24-7 Family History Circle has an update on a story I wrote about few weeks ago (Chris and Alex Haley’s DNA). Chris Haley, the nephew of author Alex Haley, recently agreed to submit DNA for a Y-DNA test. Like his uncle, Haley is very interested in genealogy and his ancestry.

According to the article, which was written by Megan Smolenyak Smolenyak, the Haleys were already fairly certain of their ancestry: “to the best of the familyâ€™s knowledge, the progenitor of the Haley line was of European origin, not African.” Indeed, the results show that the Haley Y-DNA belongs to Haplogroup R1b, a traditionally European haplogroup. My favorite part of this article, and one that many of my readers might find interesting, are all the suggestions regarding future directions that Haley can take to learn more about his ‘roots’ (sorry, I had to). Interestingly, Haley already has an anonymous 46-marker match in the DNA Ancestry database. ... Click to read more!

Last week, the genomic start-up company Navigenics issued a press release introducing their team of advisors and investors, and announcing $25 million in financing. There was an accompanying story in the Wall Street Journal, “Is There a Heart Attack in Your Future?” According to the article, the tests that will eventually be offered by Navigenics have already been tested by at least one of the company’s co-founders:

“David Agus, a cancer researcher at Cedars-Sinai Medical Center in Los Angeles who is a co-founder of the company, says he took the test and found he had a 68% risk of having a heart attack in his lifetime, compared with about 40% in the general population. His kids, he says, now help him stay away from French fries. “I’m a believer in empowerment,” he says.” ... Click to read more!

Yesterday, I looked at the size of the Genetic Genealogy market, and concluded that as of November 2007, there had been as many (or perhaps ‘at least’) 600,000 to 700,000 genetic genealogy tests performed, with 80,000 to 100,000 new tests per year. As the footnoteMaven mentioned, it might be interesting to see if we could turn those numbers into dollar amounts.

The following is a very rough attempt to translate the numbers into market value, with the following caveats: (1) I am not an economist, and I haven’t taken an economics class since high school; (2) the numbers do not take into account testing upgrades, which are offered by a number of companies; (3) the numbers do not take into account sequencing of the entire mitochondrial genome, specialized allele tests, or combination tests (e.g. Y-DNA and mtDNA) and; (4) the average cost of testing only reflects the companies included in yesterday’s accounting, and do not include the free SMGF test. ... Click to read more!

I was recently having a discussion with someone about the size of the genetic testing market, and I mentioned the number of people who had already paid for genetic genealogy testing. This oft-repeated number, 460,000, is the addition of two figures from a short 2006 EMBO article (“Genetic Genealogy Goes Global” EMBO 1072 (2006)):

So, 300,000 + 160,000 = 460,000. A year later, however, these numbers are obsolete and I wanted to bring them as up-to-date as possible. To do this, I took the 2006 EMBO papers and scoured the internet for testing numbers revealed by any of the genetic genealogy testing firms. The results suggest that the current number is much higher than 460,000. My findings are below:

1.Oxford Ancestors, FTDNA, and DNAPrint Genomics = 300,000 up to November 2006. Although I am not certain of the accuracy of this number from the 2006 EMBO article, I decided to use it as a starting point. ... Click to read more!

Welcome to the November 4, 2007 edition of the Carnival of Genealogy.The topic for this edition was actually more of a questionâ€¦ Do you have a family mystery that might be solved by DNA?I offered to analyze a submitted post for questions or family mysteries that might be solved using genetic genealogy.There were a number of interesting and challenging articles, and everyone kept me very busy!If youâ€™ve ever considered using DNA to analyze your ancestry, youâ€™ll want to read all the way through this Carnival! If family is important to you, get some advice on life insurance from Money Expert.

I wanted to start off with a post from the footnoteMaven entitled â€œAsk The Genetic Genealogist.â€In the post, she refers to me as â€œDr. DNAâ€ â€“ I could really get used to that!The footnoteMaven has a cousin on her fatherâ€™s side who was recently diagnosed as having sickle cell trait.Sickle cell is caused by any one of a number of identified mutations of the hemoglobin gene on chromosome 11.Sickle cell trait means that the cousin has one good copy of the hemoglobin gene and one bad copy â€“ one from each parent.Since this is autosomal DNA, the traditional tool of genetic genealogy, Y-DNA and mtDNA tests, wonâ€™t be of much help.There are a number of DNA testing companies that will sequence the hemoglobin gene to check for mutations, but testing your cousinâ€™s siblings wonâ€™t reveal which parent had the mutated gene.It would be best to test the parents, but they have passed away.Unfortunately, answering your mystery would most likely be very expensive and time-consuming, at least at the current stage of technology.In 5 to 10 years, as whole genome sequencing becomes cheaper, it might be a much easier project.There are some autosomal genealogy tests which purport to reveal ancestral origins (such as Africa, Europe, , etc..), but this would not reveal any information about the source of the mutated hemoglobin gene. ... Click to read more!