I’ve always known that I have weird mtDNA. This morning, I learned that it is so weird that it has helped identify a new branch of the mtDNA Haplogroup A family tree.

When I first received the results of an mtDNA test ten years ago, I was shocked to learn that my mtDNA belonged to Haplogroup A, one of the well-known Native American haplogroups. I knew that my ancestors on my maternal line were British missionaries to Roatan, Bay Islands, Honduras, traceable back to about the 1820’s, and so I was expecting haplgroup H or another traditionally European mtDNA haplogroup.

My mtDNA Line – 5 Generations in Photographs

Not surprisingly, I had no close matches in the Family Tree DNA database. And when I tried to research my haplogroup, I had a handful of control region mutations that no one else in the database or the academic literature seems to have. ... Click to read more!

Earlier this week, I had the opportunity to speak with Michael Leclerc at Mocavo about DNA, our genealogical beginnings, and so much more. Michael recorded our conversation, and it’s now available as this week’s Mocavo Fireside Chat!

If you’re curious about Y-DNA, mtDNA, or autosomal DNA, or have questions about DNA in general, I think you’ll enjoy this Fireside Chat. And be sure to check out the previous chats, it’s a lineup full of great guests!

In my genealogical research, I have sometimes found myself missing the trees by focusing on the forest.  I think it happens to many genealogists – we get caught up in the research, the dates, the places, and we forget that there was so much more to people than their vital statistics.

This can happen to genetic genealogists as well.  The connection between the results of a DNA test and the individuals in our tree can be easy to forget and difficult to visualize.  Take the results of an mtDNA test, for example.  The results are obtained from a tiny piece of DNA that has traveled thousands of years (and often thousands of miles) through hundreds of individuals to end up in your cheek cells and on the tip of a swab.  Everyone’s mtDNA is the product of an amazingly rich story that has largely been lost to history. ... Click to read more! 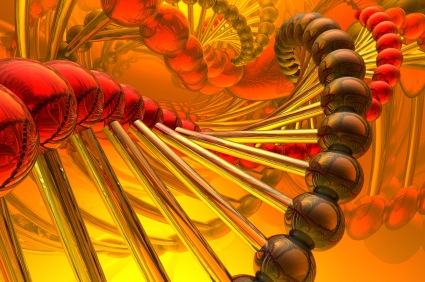 Technology Review, an MIT publication, has an article entitled “Genealogy Gets More Precise: Rapidly growing databases enable a more complete picture of one’s ancestry.“Â  The article, which is relatively balanced, discusses some of the benefits and challenges associated with genetic genealogy testing.

Also check out the article and video “Mapping Out a Nascent Market” at boston.com, which is directed towards personal genetic companies such as deCODEme, 23andMe, Navigenics, and Knome.

And lastly, scientists have sequenced and recreated the Neanderthal mtDNA genome.Â  For more information see john hawks weblog, Genetic Archaeology, Genea-Musings (with a humorous twist), Anthropology.net, and The Spittoon.Â  The original article is in Cell.Â  Turns out there are roughly 206 differences between the CRS (the Cambridge Reference Sequence, the mtDNA to which all human mtDNA is compared) and Neanderthal mtDNA; 195 transitions and 11 transversions. ... Click to read more! 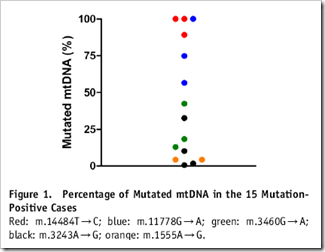 Genetic genealogy has the potential to reveal information about your health (for example, DYS464 can reveal infertility and sequencing of the entire mtDNA genome can reveal mutations that are suspected of being associated with certain disorders).Â  Although I usually don’t consider this possibility to be serious enough to discourage genetic genealogy testing, I do believe that people should be aware of the possibility before being tested.

A new study in the American Journal of Human Genetics (available here) examined the frequency of ten (potentially) pathogenic mitochondrial point mutations in 3168 neonatal cord blood samples.Â  Of these samples, a total of 15 (or 1 in 200) harbored one or more of the mutations.

Interestingly, the mtDNA of 12 of the 15 samples were heteroplasmic, meaning that their cells harbored both mutated and non-mutated mtDNA genomes.Â  Figure 1 from the paper, above, shows the percentage of mutated mtDNA in each of the 15 samples with mutations, from nearly 0% to the 100% in the three homoplasmic samples. ... Click to read more!

A few days ago I wrote about John Reid’s “Where Has Your DNA Been” post at Anglo-Connections a few days ago. This is similar to another meme which has been circulating the genealogy blogosphere for a few weeks now, including “Where was your family in 1908?” at 100 Years in America and “Where was your family 200 years ago?” at What’s Past is Prologue. Steve at Steve’s Genealogy Blog has also given the ‘Map Your DNA’ meme a try. I thought it was a fun idea, and had a number of potentially interesting applications, if I were a programmer and if I had any free time. Absent that, I thought I would at least try to replicate John’s idea by mapping my location in 2008 versus the locations of my Y-DNA and mtDNA in 1808, 200 years ago. ... Click to read more!

Welcome to the November 4, 2007 edition of the Carnival of Genealogy.The topic for this edition was actually more of a questionâ€¦ Do you have a family mystery that might be solved by DNA?I offered to analyze a submitted post for questions or family mysteries that might be solved using genetic genealogy.There were a number of interesting and challenging articles, and everyone kept me very busy!If youâ€™ve ever considered using DNA to analyze your ancestry, youâ€™ll want to read all the way through this Carnival! If family is important to you, get some advice on life insurance from Money Expert.

I wanted to start off with a post from the footnoteMaven entitled â€œAsk The Genetic Genealogist.â€In the post, she refers to me as â€œDr. DNAâ€ â€“ I could really get used to that!The footnoteMaven has a cousin on her fatherâ€™s side who was recently diagnosed as having sickle cell trait.Sickle cell is caused by any one of a number of identified mutations of the hemoglobin gene on chromosome 11.Sickle cell trait means that the cousin has one good copy of the hemoglobin gene and one bad copy â€“ one from each parent.Since this is autosomal DNA, the traditional tool of genetic genealogy, Y-DNA and mtDNA tests, wonâ€™t be of much help.There are a number of DNA testing companies that will sequence the hemoglobin gene to check for mutations, but testing your cousinâ€™s siblings wonâ€™t reveal which parent had the mutated gene.It would be best to test the parents, but they have passed away.Unfortunately, answering your mystery would most likely be very expensive and time-consuming, at least at the current stage of technology.In 5 to 10 years, as whole genome sequencing becomes cheaper, it might be a much easier project.There are some autosomal genealogy tests which purport to reveal ancestral origins (such as Africa, Europe, , etc..), but this would not reveal any information about the source of the mutated hemoglobin gene. ... Click to read more!

A recent paper in the American Journal of Physical Anthropology examined mtDNA extracted from the hair and nails of eight Inuit mummies. These essentially freeze-dried mummies were discovered in 1972 in a natural tomb at Qilakitsoq in the Uummannaq Municipality of Greenland. Using C14 analysis, the mummies have been dated to approximately 1460.

The bodies were found in two separate positions about 1 meter apart. In Grave I, there were five bodies:

In Grave II, there were 3 bodies:

The researcher’s primary goals were to sequence the HVR1 region of each individual’s mtDNA, and then to compare the results to determine possible relatedness of the remains. All 8 individuals fell into Haplogroup A2, but belonged to three different maternal lineages which were mixed between the two grave sites: ... Click to read more!

Some scientists have hypothesized that Australian aboriginals received a portion of their DNA from an ancient hominid species called Homo erectus, which for a short time was contemporaneous with modern man. A recent study published in PNAS (Proceedings of the National Academy of the Sciences) set out to answer this question by analyzing mtDNA and Y-chromosome samples from aboriginals.

I was very surprised when genetic testing revealed that my maternal lineage was not European. I’m sure, however, that my surprise was nothing compared to that of two British women who recently discovered that their maternal lineage was of Native American descent (the original article is available through the BBC).

Doreen Isherwood and Anne Hall learned that their mtDNA belonged to Haplogroups A and C, traditional Native American Haplogroups. As the BBC story explains, Native Americans were brought back to England as early as the 1500s.

Said Ms. Hall: “I was thrilled to bits. It was a very pleasant surprise. To have Native American blood is very exotic.”

Thanks to The Genealogue.