Scientists from the University of Utah have traced a mutation in the adenomatous polyposis coli (APC) gene to a Mr. and Mrs. George Fry, who arrived in the New World aboard the William & Mary around 1630.

The mutation, c.426_427delAT, is believed to increase the carrier’s chances of developing colon cancer from 2 in 3 by age 80, a significant increase from the normal of 1 in 24. The study is available here for FREE – thank you open access – and is entitled “American Founder Mutation for Attenuated Familial Adenomatous Polyposis.”

Scientists traced two branches (from two of the Fry’s four children) of the family back to the Fry family, one in Upstate New York and one in Utah. The family in Utah, with more than 5,000 people, has been the focus of scientific study for over 14 years because of their unfortunately high risk of colon cancer. In fact, members of the Utah branch constitute 0.15% of all colon cancer in the state of Utah!

Figure 1 from the paper: 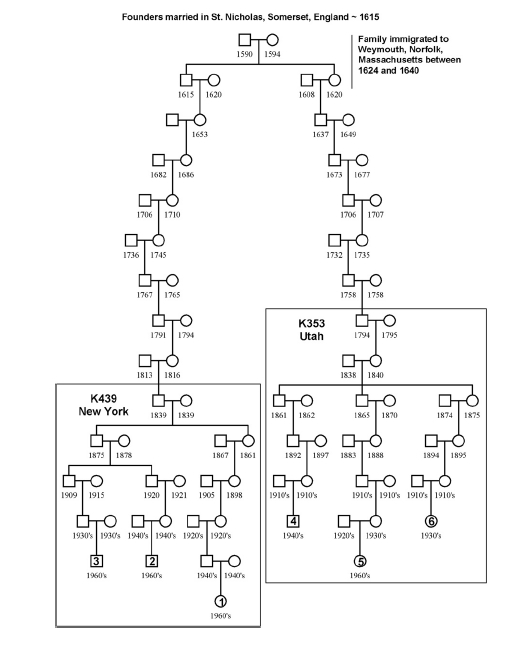 Interestingly, the researchers used familysearch.org to trace back 10 generations to link the Utah and New York families. According to the Salt Lake Tribune, “another 13 families around the country have a similar ‘genetic fingerprint,’ Neklason said, but have not yet been definitely linked to the English couple with whom the mutation likely originated.” From the paper:

“By using family history records and standard genealogy methods, kindreds 353 and 439 were traced to a common founding couple who were born in in the 1590s. The couple was married in St. Nicholas, , , in 1615 and had 4 children born in between 1615 and 1624. The couple, along with at least 2 of their children, arrived in some time before 1640, when their daughter was married in , . A son born in 1615 is the ancestor to kindred 439 and a daughter, born in 1620, is the ancestor to kindred 353. The birth year of each parent is indicated on the pedigree.”

This isn’t the first case of a gene being traced to early immigrants. In 2004 researchers announced that a mutation in the MSH2 gene, also linked to increased risk of colorectal cancer, was brought to Pennsylvania by German immigrants in the early 1700’s.The one thing that bothered me was that according to study author Deb Neklason, the mutation has not been found in England and thus is believed to have originated with Mr. or Mrs. Fry. Probably too far-reaching of a conclusion at this point – how much study has been done in England related to this mutation? And, of course, it could have originated with Mr. or Mrs. Fry’s parents, or grandparents, etc. Really just a minor point.

So what does this mean for genealogists? I believe that this will become more and more common as the cost of DNA sequencing descreases. Five years ago, this study might have been too expensive to complete. When people begin to combine genetic sequencing with family trees, these studies will be limited only by the availability of family trees and computing power (I imagine that some of it will be quite complex). At first it might seem a little far-fetched, and it worries many people (perhaps rightfully so), but it is likely that at some point in the not-so-distant future scientists will be able to trace many of the SNPs in an individual’s genome back to a specific ancestor. Personally that possibility seems exciting, although I certainly respect and appreciate the privacy worries that many people have.

On a final note, I would hate to think that founder families will be known merely for their mutations. Although the Fry’s may have brought this harmful gene with them to the New World, their DNA made possible the lives of every one of those descendants.