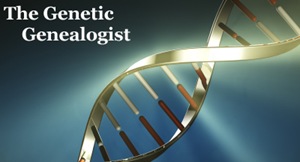 On the heels of my recent post discussing all the interesting information that’s recently entered the blogosphere about genetic genealogy and DNA studies, here are a few more:

Misha Angrist, one of the Personal Genome Project’s “First 10“, wrote an article about the inevitability of DNA sequencing at News Observer. The article is a response to a recent editorial in the NEJM.

VisiGen Biotechnologies announces that IF their technology works as planned, the $1000 genome is just months or a few years away. See more at Genetics and Health and Next Generation Sequencing. Pacific Biosciences (PacBio) has made a similar announcement.

At Anthrpology.net, “Genetic Structure of Native American inferred from diversity in 280 bases of mtDNA.” The original paper is here. The abstracts states that “In this study, we analyze the mitochondrial DNA sequence between positions 16040 and 16322 of the Cambridge reference sequence. Our sample represents a total of 886 people from 27 indigenous populations from South (22), Central (3), and North America (2).” The authors find that “Eastern South America harbors more genetic variation than has been recognized.”

Examination of Chinese mtDNA and Y chromosomes in “Pinghua population as an exception of Han Chinese’s coherent genetic structure”, co-authored by the Genographic Project, reveals that the Pinghua, a small subgroup of Han Chinese, have non-Han Chinese genetic origins. The results are discussed at Yann Klimentidis’ Weblog and Diekenes’ Anthropology Blog.

A new paper examines the ancient migration across the Bering land bridge in “A Three-Stage Colonization Model for the Peopling of the Americas.” Particularly interesting to anyone with Native American Y-chromosomes or mtDNA (such as myself!). See more discussion at Anthropology.net.

Illumina has sequenced the first African genome from an anonymous Nigerian male sample in the HapMap project. The sequencing “yielded over 3.7 million single nucleotide polymorphisms (SNPs), including more than one million novel SNPs.” HT: Next Generation Sequencing.