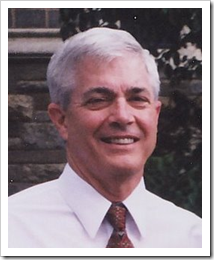 “Terry is co-founder of WorldFamilies.net, President of the Barton Historical Society (BHS) and Co-Leader of the 193 member Barton DNA Project. He is the â€œLine Leaderâ€ for the Thomas (1,2,3) Barton family of Stafford Co VA and for the David Barton married Ruth Oldham family. He has made a number of presentations about using DNA in Genealogy, the Barton DNA project and his great-grandparent’s “Barton House” and has written many articles for the BHS Newsletters and website.”

The Genetic Genealogist: How long have you been actively involved in genetic genealogy, and how did you become interested in the field?

Terry Barton: I got involved in genetic genealogy in 2001 as assistant admin for the Barton Surname Project – when it was formed. We worked with BYU’s Center for Molecular Genealogy – which eventually became Relative Genetics. Our first two rounds of testing were in “batches”, with 52 men in the first batch and 42 in the second. I became the lead admin with batch 2 and have led the project since then. I was already actively researching my ancestry by traditional means and was President of the Barton Historical Society, leading that group into becoming the sponsoring organization for the Barton DNA Project.

TGG: Have you undergone genetic genealogy testing? Were you surprised with the results? Did the results help you break through any of your brick walls or solve a family mystery?

TB: I am personally tested on 116 yDNA markers, the available SNPs and the Full mtDNA Genetic Sequence. I have tested my son to the same 116 markers (we match perfectly) However, my Dad and I each started a mutation (his is at DYS388, while mine is at DYS452) So, I am 41/43 when compared to my Uncle. I use this example to explain how you can’t count mutations to determine how closely related you are to someone. I was pleased to identify the probable ancestral home of my Bartons as Lancashire and the probable home of my mother’s Hodges family as Kent. My Bartons appear to be the Celts and my mother’s Hodges to be the Frisians (both conclusions are still tentative) I have also learned that most southern American Bartons are my genetic kin and that a number of the southern American Hodges are my genetic kin. I have dna tests for another half dozen of my ancestral lines and mtDNA FGS tests on my Dad and Wife. There are too many success stories across this range of testing to share here.

TGG: You are one of the co-founders of the World Families Network. How did the site come about, and what are its goals?

TB: My partner, Dr. Richard Barton (also co-admin of the Barton Project) is my genetic kin – we found each other through the project. Our most recent common ancestor was born no later than c1620s – we have no paper trail connection. (Rich is a 43/43 match to my Uncle) We used Rich’s website leadership to help us address our early project weakness of low internet visibility and started thinking in early 2004 about how we could share our learning with other surname projects who needed information and/or website help. Over the course of 2004, we evolved into much of what you see today, providing an array of helpful information and supporting many surname projects in a variety of ways. Our goal is to provide an array of useful services to the Genetic Genealogy community – and to have fun doing it.

TGG: What other genetic genealogy-related projects are you involved with?

TB: I am lead or support admin for over 50 of my ancestral surname dna projects. In many cases, I have evolved to being only the technical advisor or support, while I (or our staff) provide leadership for many more of the projects than I wish (which means I haven’t found the right cousin to get involved). I love the connections I’ve made and am constantly amazed at how many folks will go out of their way to help me – or to share info with me. I also co-lead the Va-1600s geographical projects and the mt-T1 haplogroup project and am one of four admins on the T_FGS research project. I am webmaster and founding board member of the Journal of Genetic Genealogy, serve on the Board of the Cobb County Genealogical Society and a member of ISOGG. I continue as President of the Barton Historical Society and am a founding member of the Hodges-Hodge Society, which came out of the Surname dna project it now sponsors. I speak regularly on genetic genealogy. I probably missed something.

TGG: What do you think the future holds for genetic genealogy?

TB: When I started in 2001, 12 markers was a lot! By the time Barton (finally) got our first batch of results in 2002, we received info on 23 markers – which was incredible. I used to think 100 markers and 100 members would bring all of the answers (neither did). When I look to the future and try to imagine – I really can’t identify specifics – other than to anticipate that we’ll know so much more than now. I realize that we are building the foundation for that future and hope that those who follow appreciate what we have done (as they laugh at the primitive info and understanding that we had “way back in 2008”. )

My personal quest is to develop enough learning through dna to replace the lost paper trails. I don’t know if that will be possible – but I intend to keep trying.

TGG: Thank you, Terry, for this terrific interview!

Other posts in the TGG Interview Series: