Mary Carmichael, a science editor for Newsweek, is in the midst of a week-long dilemma.  This Friday, after reading a series of articles written by members of the DTC genetic testing community, she will decide whether she should purchase a genome-wide SNP analysis.  Although the decision might be a simple one for some, in light of the recent critique of DTC genetic testing in the media, in the literature, and by the government, it is certainly understandable that Mary is looking for further insight into her decision.

Today, Mary is asking “What Can I Learn From At-Home DNA Tests?” and has gathered answers to her question from a wide variety of writers and scientists, including myself.  Since the Newsweek site only has space for a brief introduction to each topic, this post is meant to be a more in-depth answer what Mary could learn about her ancestry from a DTC test.

Genome-wide SNP scans explore a test-taker’s autosomal DNA, the 22 pair of non-sex chromosomes found inside the nucleus of each of our cells (although some tests examine the sex chromosomes as well as the mtDNA).  Rather than sequence the entire genome, an endeavor that is still too expensive for the average consumer, genome-wide SNP scans analyze roughly 600,000 locations in the human genome.

Using the results of a SNP scan, testing companies offer an array of educational and/or recreational analyses that offer exciting and informative insight into ancestry, medical propensities, and phenotypic traits such as eye color.  However, these tests are not without certain concerns and limitations.

To help Mary – and perhaps you – make an informed decision about whether to purchase a genome-wide SNP test, we will explore several of the most important benefits and limitations of the ancestral side of autosomal DNA testing.

One of the most important – and confusing – concepts that people who are new to autosomal testing encounter is the fact that everyone has both a Genetic Tree and a Genealogical Tree.  Your genealogical tree includes every one of your ancestors throughout history.  Your genetic tree, however, only includes those ancestors who were lucky enough to contribute DNA to your genome.

I recently posed the following hypothetical questions regarding the genealogical tree vs. genetic tree issue:

“At 10 generations, I have approximately 1024 ancestors (although I know there is some overlap). How many of these ancestors are part of my Genetic Tree? Is it a very small number? A surprisingly large number?”

“What percentage, on average, of an individual’s genealogical tree at X generations is part of their genetic tree?”

Luke Jostins at Genetic Inference kindly looked into my questions and offered some helpful and creative insight. Using a statistical analysis that he based on data from a recent study, Luke concluded that. based on his data, on average only about 120 of our 1024 genealogical ancestors at 10 generations (or 11.7%) are our genetic ancestors.  Luke also concluded that:

“The probability of having DNA from all of your genealogical ancestors at a particular generation becomes vanishingly small very rapidly; there is a 99.6% chance that you will have DNA from all of your 16 great-great grandparents, only a 54% [chance] of sharing DNA with all 32 of your G-G-G grandparents, and a 0.01% chance for your 64 G-G-G-G grandparents. You only have to go back 5 generations for genealogical relatives to start dropping off your DNA tree.”

SNP testing has been used for well over 30 years to classify Y-chromosomes and mtDNA into discrete but related groups called ‘haplogroups.’  For example, all humans on Earth are maternally descended (i.e. through our mother’s mother’s mother’s mother…and so on) from Mitochondrial Eve, a woman who is believed to have lived about 200,000 years ago in Africa.  Mitochondrial Eve passed on her mtDNA to all humans who are alive today.  However, in the intervening 200,000 years, her mtDNA has repeatedly branched off into different haplogroups through the accumulation of SNP mutations.  Thus, through analysis of a few SNPs on the mtDNA genome, an individual’s mtDNA can be classified into a particular haplogroup.  And, since research has shown that particular SNP mutations arose in certain areas at certain times, it is often possible to assign the haplogroup – and thus the test-taker’s ancient ancestry – to a broad geographic location.

SNP testing of my own mtDNA haplogroup, for instance, has shown that it belongs to haplogroup A2 which is most often found in Native populations in the Americas.  This suggests that my mother’s mother’s mother’s…mother was Native American.

SNP testing of the Y-chromosome and mtDNA does have some limitations.  As critics often like to point out, at best Y-chromosome and mtDNA analysis only reveals information about 2 ancestors.  However, this fact typically doesn’t prevent the genetic pioneers and explorers from taking these tests, since learning about those 2 ancestors can be extremely rewarding and enjoyable.

Although Mary does not have a Y-chromosome, her genome-wide SNP scan will include an analysis of her ancient maternal ancestry using her mtDNA.

One of the most exciting products offered by autosomal ancestry testing companies is the admixture analysis.  This analysis examines segments of the autosomal DNA and determines for each segment whether it was likely to have been inherited from ancestors in Africa, Asia (including Native Americans), or Europe (and sometimes sub-populations in those regions, depending on the test).  For example, my 23andMe test suggested that I am 97.89% European, 1.84% Asian, and 0.27% African, as shown in my 23andMe Ancestry Painting: 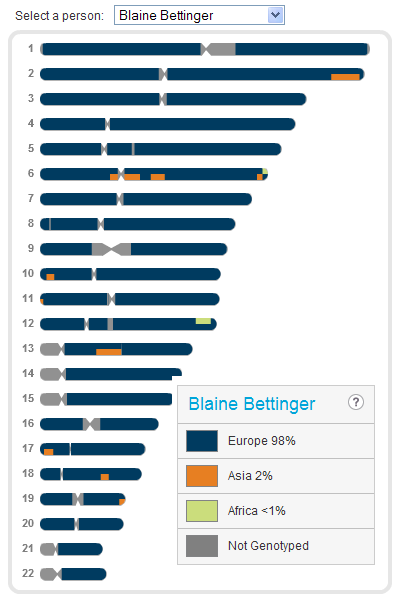 So do these results mean that exactly 97.89% of my genetic ancestors were European, and that 1.84% were Asian?  Not really.  An individual’s admixture results can differ from company to company based on which SNPs are used for analysis, which reference populations are used for analysis, and which algorithm is used for the analysis.  For example, my deCODEme admixture analysis (also based on my 23andMe results) suggested that I am in fact 87% European, 9% European, and 4% African.

While the exact percentages can vary, the admixture test results provide the test-taker with an important and previously unavailable glimpse into their genetic heritage.  For example, my results unexpectedly revealed African ancestry, which in hindsight this makes perfect sense considering that I likely have Garifuna/Caracol ancestry from the island of Roatan.  As my own results show, the genome can hold long-forgotten information about your personal heritage that can be uncovered and explored for the first time in hundreds of years.

So what does this mean for Mary?  On the one hand, it means that with the purchase of a test she can receive her own admixture results and explore her genetic heritage, thereby possibly uncovering long-hidden ancestry.  On the other hand, it means that: (i) her admixture results will not be absolutes, and that they might change if new SNPs, data, or algorithms are used; and (ii) she should be prepared for the possibility of unexpected results.  In my own experience, however, I’ve found that many consumers are fascinated by unexpected results. 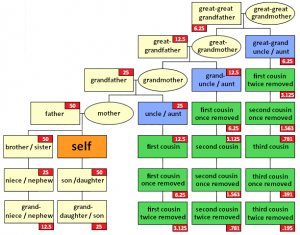 Another primary driver of the autosomal ancestry market is the ability of test-takers to identify and connect with genetic cousins, both close and distant.

The genetic ancestry market has developed specific tools that allow consumers to identify and connect with genetic cousins.  23andMe offers Relative Finder, a service that looks for segments of DNA that a customer shares with other 23andMe customers.  If two people in the 23andMe database share a segment of DNA, this suggests that they share a common ancestor.  The amount of shared DNA, which is reported by the companies, can suggest how recent their common ancestor was.  Thus, in addition to identifying genetic cousins these products offer a suggested relationship range for the cousins.  Similar to 23andMe’s Relative Finder, Family Tree DNA offers a product called Family Finder which compares segments of the test-taker’s DNA to DNA in the Family Finder database.

Once a match is discovered, the genetic cousins can share their genealogical trees as well as their suggested relationship in order to identify an overlap in their trees.  That overlap is potentially the common ancestor from whom they inherited the same stretch of DNA, and thus this ancestor is located in their genetic trees.

For example, I’ve discovered a relative in Family Finder with whom I share at least 12 ancestors in the past 200-400 years.  Many other customers report success finding a single shared ancestor with their genetic cousins.  Identifying a shared genetic ancestor, together with the segment of shared DNA from that ancestor, allows genetic cousins to trace the path of the shared segment through both time and space from that ancestor to themselves.

A genome-wide SNP scan, therefore, will potentially allow Mary to track segments of her genome through both time and space!

In addition to ancestral information, most autosomal DNA testing companies offer some type of analysis regarding physical traits and medical propensities.  Other companies offer limited tests that look at only ancestry or only medical information.  Regardless of the type of test purchased, it is important to note that it is almost impossible to separate medically-relevant DNA from ancestrally-relevant DNA.

Although a SNP or short stretch of DNA used for ancestral analysis may not currently harbor any known data regarding physical traits or health information, a paper could be published the very next day which shows that the same bit of DNA actually reveals one’s propensity for a certain medical condition.  As a result, sharing raw DNA data with another individual – even if that data is only believed to reveal ancestral information – can potentially reveal medical information.

What does this mean for Mary?  Education is always the best method of preparation.  Knowing that raw data can reveal medical information, Mary will be aware of the possibilities and can use that information to decide the level of sharing she is most comfortable with.

David Pike, for example, has created a suite of tools for analyzing raw data from 23andMe and/or FTDNA, including the following:

Promethease is a free utility that uses the SNPedia database to generate a report about medical information and traits.  It uses raw data from most of the major testing services and can even pool data from multiple testing services.

Adriano Squecco maintains the Y-Chromosome Genome Comparison database, which is a spreadsheet of raw Y-DNA results from male 23andme customers.  The data is being used to identify new SNPs for Y-DNA testing.

These tools offer analysis beyond what testing companies currently offer, allowing the user to be an early explorer in this area.

Through autosomal DNA testing, Mary can learn about her genetic heritage and connect with long-lost genetic cousins to explore her genetic family tree.  Further, Mary can use her results in novel do-it-yourself ways using tools developed by the DTC genetic testing community.  By being cognizant of the privacy issues and limitations known to be associated with genetic ancestry testing, Mary can also make informed interpretations of her data and decide with whom she will share her results.

(Potential Biases:  Although I don’t have a direct financial stake in the success of DTC companies, I have performed consulting work for Pathway Genomics, a DTC genetic testing company, and have received a  complementary SNP scan from 23andMe and Family Tree DNA for reviews here on the blog.  I am opposed to any unreasonable or paternalistic regulatory barrier to our genetic information, but I also believe that potential test-takers should perform their own research and investigation into genetic testing in order to understand the benefits and limitations of these tests prior to purchasing a test.)