(A side note: as I was sitting in the airport waiting for my flight from Newark to San Francisco, I looked up and saw a familiar face – Judy Russell from The Legal Genealogist! We shared the next two flights, although Judy was furiously dealing with an unfortunate hack attack on her website, which has since been resolved).

Dr. Wells discussed the history of the Genographic Project, including its launch in 2005 with the original Y-DNA and mtDNA tests, and the three-prong nature of project (research, public participation, and grants). He then discussed the project’s recently launched Geno 2.0 test (see here to purchase).

I’ve heard Dr. Wells speak several times now, and each time he has been engaging; this time was no different. If you ever get the opportunity, you will not be disappointed!

The first sessions were:

I attended Tim’s talk, which was very good.  Chromosome mapping – essentially mapping every segment of your DNA to an ancestor – is a challenging and lifelong endeavor.  The benefits, however, are numerous and I recommend that everyone try some mapping as they explore autosomal DNA testing.

Next up was Dr. Gates – “Skip” – with a discussion of his family, how he got started in genealogy and genetics, and the development of his many PBS series. It was a fascinating insight into Dr. Gates’ family history as well as the African American experience in general.

It was, without a doubt, one of the most interesting talks I’ve ever heard. At one point he mentioned that his father was the funniest man he ever knew, but it’s clear that much of that humor was inherited by Dr. Gates! At two or three points during his talk I literally laughed out loud, something I never do at lectures like this!  He received a standing ovation at the end of his talk; indeed, the crowd practically jumped to their feet. 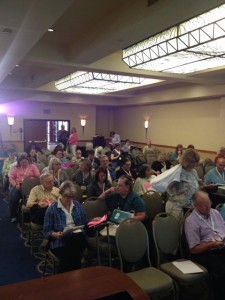 One half of the terrific audience!

In a cruel, cruel twist of fate, my talk began immediately after Dr. Gates’ talk. I began the talk with a comment to that effect, and I think that was sufficient to break the ice! I spoke about “Using Third-Party Tools to Analyze Your DNA Results,” the first time I’ve given this talk. I think it went very well; the 200-member room was mostly full and it was both live-streamed and recorded for purchase and the SCGS member archive. I’m hoping the reviews provide some useful feedback!

The other talks, both of which I would have liked to attend, were:

The third set of sessions were:

I attended CeCe’s talk, which was a great look at some real-life case studies and examples from her own research providing insight into the MANY uses of autosomal DNA.

The final set of sessions were:

I attended Ken Chahine’s talk to learn more about AncestryDNA’s most recent developments, and learned that he is an engaging and energetic speaker.

During the Ancestry.com presentation, Dr. Chahine shared number of things, including the following:

The talk was followed by a brief Q&A, during which several of the questioners were extremely rude. It was embarrassing, and I hope the Ancestry.com team members do not consider this conduct to represent the genetic genealogy community in any way!

Aside from the terrific speakers, the highlight of this trip for me was seeing friends both old and new, and simply being surrounded by people interested in genetic genealogy. Although it’s likely that more than 1,000,000 people have had their DNA tested for genealogically-relevant information, we are still a close-knit community.

Thank you to the Southern California Genealogy Society for inviting me to DNA Day. It was well worth the long plane ride ahead of me!