My grandmother Jane died in 1984 when I was just 8 years old. I have some really great memories of her, faded with time but still filled with emotion. Bath times, spending time with her in the summer, newspaper hats, chrysanthemums.

However, in addition to those memories, she gave me a very unique genetic heritage. She was from a region of the world with a high degree of admixture, and thus it is from her that I obtained my Native American mtDNA, my Native American, African American, and Spanish autosomal DNA. It is an incredibly rich and fascinating genetic legacy.

In an attempt to learn more about my grandmother’s genetic heritage, I’m using GEDmatch’s new Lazarus tool to try to recreate as much of her genome as possible. Join me on the journey, and learn about this new tool.

Lazarus is a relatively new Tier 1 tool at GEDmatch that allows users to create what are called “pseudo-DNA kits.” There is a help page called “Lazarus” with a description and examples, for more information. From the description at GEDmatch:

Generate ‘pseudo-DNA kits’ based on segments in common with your matches. These ‘pseudo-DNA kits’ can then be used as a surrogate for a common ancestor in other tests on this site. Segments are included for every combination where a match occurs between a kit in group1 and group2. The resulting are combined to create the final kit. It may be useful to save copies of the next page results, for future reference. 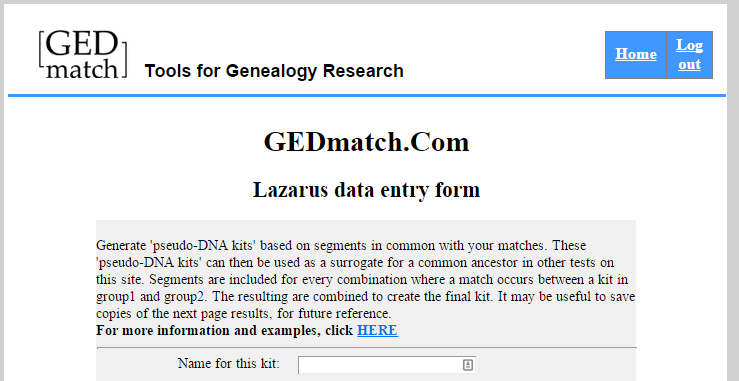 Think of Lazarus as a very simple and largely blind algorithm – all it does is compare the DNA in Group 1 to the DNA in Group 2, and then combines all the matching DNA into a single kit. It doesn’t know what you’re trying to do, it doesn’t figure out the relationships between the people in Group 1 and Group 2, and it will not (and cannot) tell you if you made a mistake. So you have to do all the thinking for it.

The most important rule is to NEVER EVER PUT A DESCENDANT IN GROUP 2!! The second-most important rule is to NEVER EVER PUT THE SAME PERSON IN GROUP 1 AND GROUP 2. If the goal of Lazarus is simply to compare the DNA in Group 1 to the DNA in Group 2, and you put the same person in both, you’ve essentially re-created the genome of that person. For example, by putting just myself in Group 1 and Group 2, the Lazarus kit comprises an entire genome, 3781 cMs. It works because it doesn’t analyze what I put there, so be careful and read below about ways to check the Lazarus kit for errors!

Alright, let’s say the target Lazarus person is DAD, and you have DNA kits at GEDmatch for the following people:

When a kit is processed, the results page will have several sections, starting with a first section showing every matching segment between the people in GROUP 1 and the people in GROUP 2. In the example below, I use myself (GROUP 1), my paternal aunt (GROUP 2), and my mother (SPO– USE) to recreate my father’s genome (who is living, but this is as an experiment). The “Contributions” are every match between me and my paternal aunt: 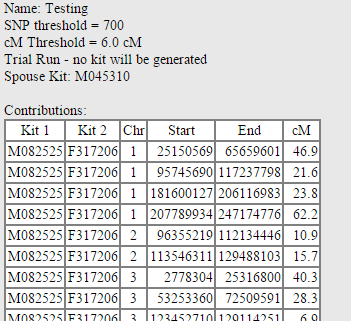 And the next section shows an organized compilation of all the segments used for the new Lazarus kit: 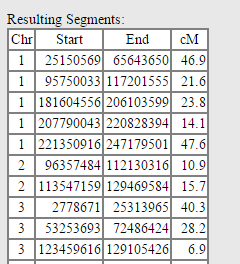 At the end of this column is the most important number on the page:

BE SURE TO RECORD THIS NUMBER!!! IT IS VERY DIFFICULT TO GET IT LATER!! IN FACT, SAVE THE WHOLE PAGE!!

That number, circled in red, tells you the size of the final Lazarus kit. The closer that is to about 3,700 cM (a full genome), the better. A created kit will be eligible for batch processing (and one-to-many matching) ONLY IF the total cM is 1500 or greater. Smaller kits will only be used for one-to-one matches.

The final column shows the original kits with the utilized segments:

So that’s how to use Lazarus!

Once you have a kit, how can you check to make sure that you haven’t made any serious errors?

First, for your own satisfaction use the “DNA File Diagnostic Utility” tool at GEDmatch to make sure that everything is as it should be. If you were above the 1500 cM threshold, does the Diagnostic indicate that it has been processed for One-to-Many? (You will have to give this a few days for the kit to be processed, of course).

Lastly, use One-to-One Comparisons for the Lazarus kit and the other side of the family! For example, if you rebuilt your father’s genome using Lazarus, do a one-to-one with your Mom and the Lazarus kit. If it matches (and your parents weren’t related), you did something wrong. Or try the Lazarus kit and a maternal aunt, cousin, or other maternal relative. If there is any sharing (and there’s no known relationship), then there’s a problem. Now, of course, this may not work for an endogamous population (in fact, Lazarus will be tricky – but not impossible – for endogamous populations). As noted on the Lazarus page of the GEDmatch wiki: “If you find any matching segments, look at the ‘Contributions’ list on the results page to see what kit(s) the matching segment(s) came from. Remove that kit from your entry form, and generate new results.”

In the next post, we’ll identify kits for my grandmother’s Lazarus project!