In my last post (see “Recreating a Grandmother’s Genome – Part 1”), I introduced my grandmother Jane, who died when I was just 8 years old. Although I have only a few memories of my grandmother, I have 25% of her DNA. To explore this rich genetic legacy, I’m trying to recreate as much of my grandmother’s genome as possible using the GEDmatch Tier 1 tool called “Lazarus.”

In the last post we also learned about the new Lazarus tool. In today’s post, we’ll choose what kits to use for my grandmother’s Lazarus kit.

So GROUP 1 must be descendants of the target Lazarus kit. My grandmother has six children, twelve grandchildren, and eleven great-granchildren. Any of these 29 people are candidates for GROUP 1. Of those 29 people, I’ve tested four of the six children and one of the grandchildren (myself). Yeah, I know, I have more testing to do!

So in my GROUP 1, there will be the following people: four children (two daughters, two sons) of the target Lazarus person. Since my mother is one of the four children being utilized in GROUP 1, I won’t add myself to the group; any DNA that I could add would already be included in my mother’s kit.

Like most people, GROUP 2 presents the biggest challenge to my project. I need the closest relatives possible. Siblings and parents of the target Lazarus kit would be preferred, but my grandmother’s siblings and parents are, unfortunately, all long deceased.

LAZARUS RUN #1 – Using the four children in GROUP 1 and the first cousin in GROUP 2, I get a Lazarus kit with 1381.5 cM (248,288 SNPs), which is probably very close to the entirety of the DNA that my grandmother and her first cousin shared in common. Interestingly the kit has no DNA from chromosomes 8, 17, or 22, although this is not unexpected; first cousins will often not share DNA on every chromosome.

TIP: Don’t forget to try the “DNA File Diagnostic Utility” to review your generated Lazarus kit; it provides a slightly different way of looking at the file although the information is similar to the Lazarus interface.

If you forgot to save the Lazarus page when you generated a kit, you can use the “DNA File Diagnostic Utility” to analyze your kit.

While I can run a One-to-Many comparison using any of the four children, I won’t be able to tell if the matches are related to my grandmother or to my grandfather. I might have more luck with the double first cousin, as she is related on both sides of the family.

To identify potential cousins, I used the “People who match one or both of 2 kits” tool. As the name suggests, the tool lets you enter two kit numbers and identify: (1) everyone at GEDmatch that matches BOTH kits; and (2) everyone at GEDmatch who matches only ONE kit. — USE THIS WITH EXTREME CAUTION! The danger of this tool is that you’ll identify cousins that might be related via the line you aren’t investigating (e.g., my grandfather). However, my grandmother’s family is from another country and the likelihood of recent overlap is so remote that I wasn’t concerned about this analysis.

I used the “People who match one or both of 2 kits” tool with the following people:

Using the tool I found kits that match both [First Cousin] and [Child]. The red boxes show kits that are my own, including myself and the other siblings. 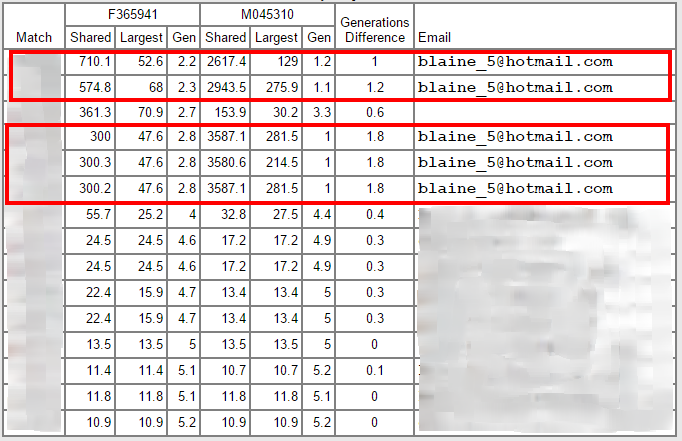 These other 10 individuals are all possible candidates for my grandmother’s Lazarus kit.

LAZARUS RUN #2 – For the second Lazarus run, I used the four children in GROUP 1, and the following in GROUP 2:

Importantly, this technique allowed me to surpass the 1,500 cM threshold for processing and inclusion in One-to-Many comparisons.

A One-to-One compare of the resulting Lazarus file provides a visualization of the segments of DNA in the Lazarus file: 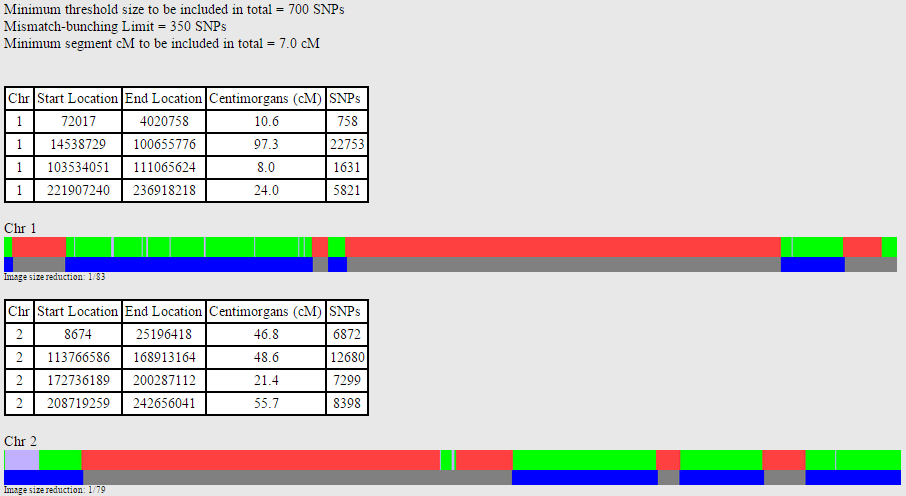 Using this method, I was able to recreate genomes for 3 of my 4 grandparents, all above the One-to-Many comparison threshold (1,500 cM minimum). Here’s what I used:

This is the process described in this and the previous post.

I have not yet tested any of my maternal grandfather’s close cousins.

This is of special interest to me as the mother of this Lazarus kit was adopted, and I’m trying to use DNA to solve the mystery.

You can see that having a sibling makes a huge difference in the reconstruction.

The big question now is probably, so what? I’ve created these Lazarus kits, but what can I do with them? We will take a look at this in the next post.