In “Visual Phasing: An Example (Part I),” we identified and labeled all of the recombination points in the three siblings, Susan, Brooke, and Felix: 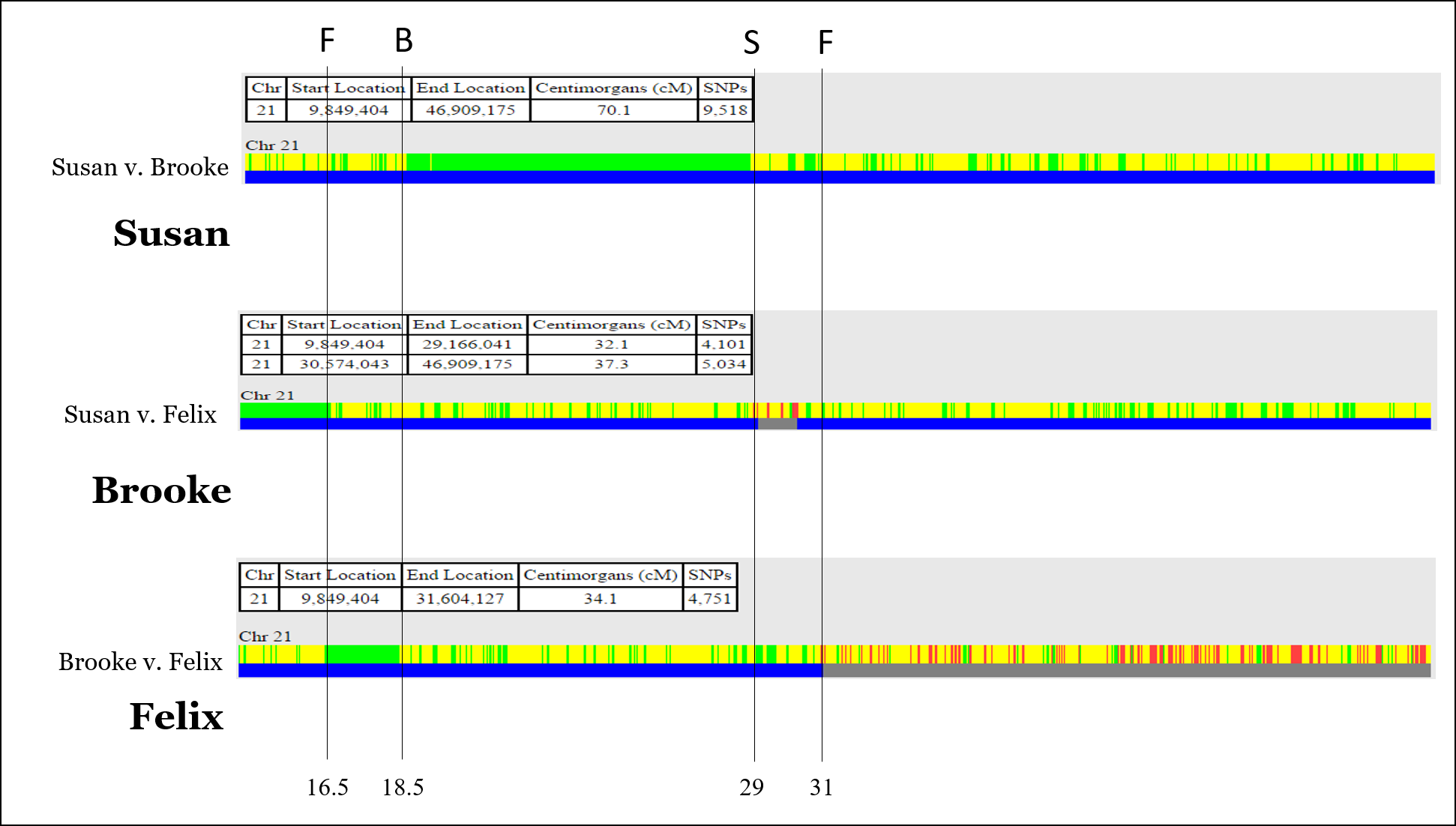 In Part 2 of the series, we’ll use the identified and labeled the recombination points to assign segments of DNA to the four grandparents.

The next step is to fill in the chromosomes using the identified recombination points. We’re going to start with the fully identical region shared by Susan and Brooke, shown in the red square in the next image. We can fill into both chromosomes for Susan and Brooke (the blue and purple segments): 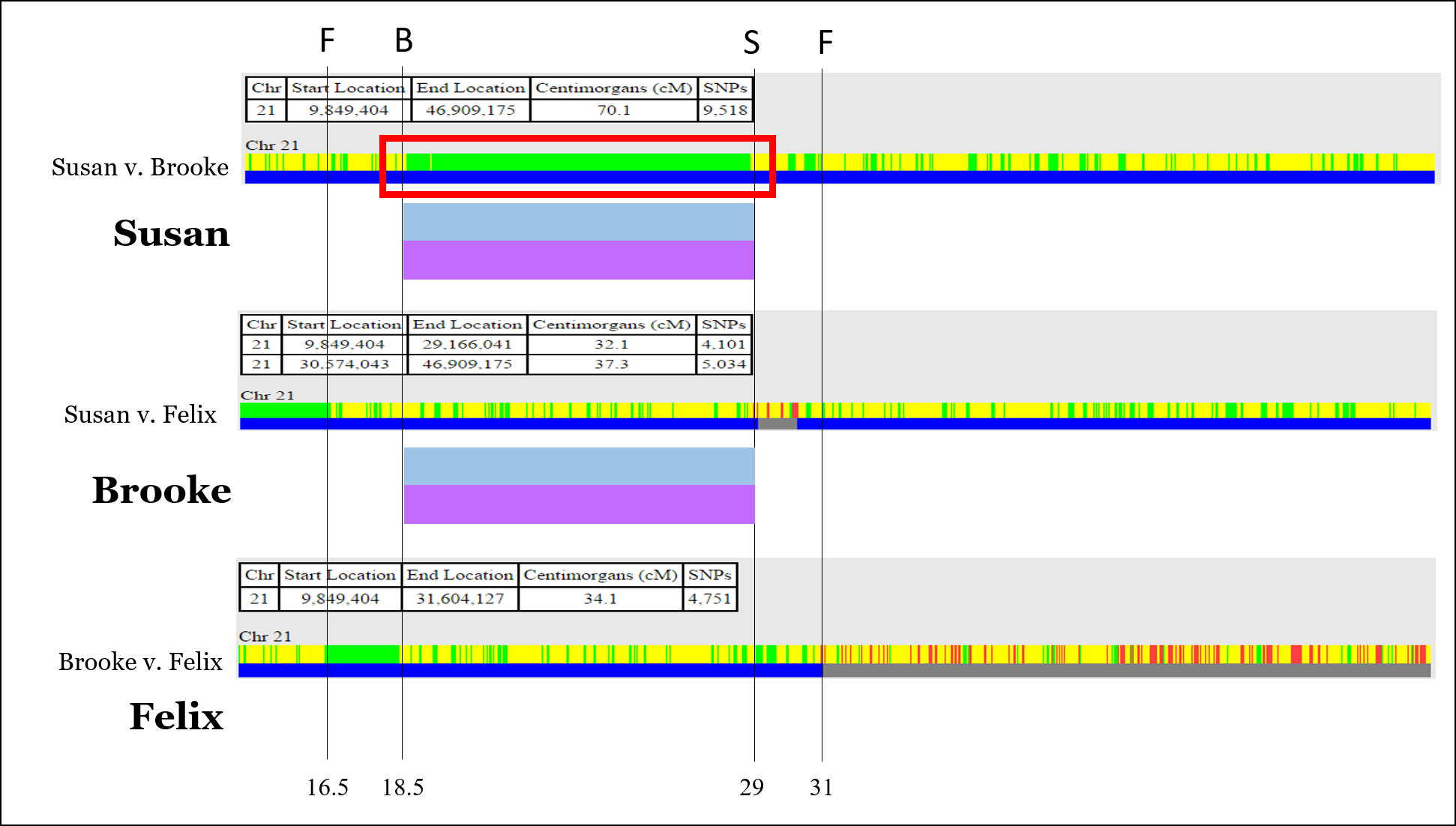 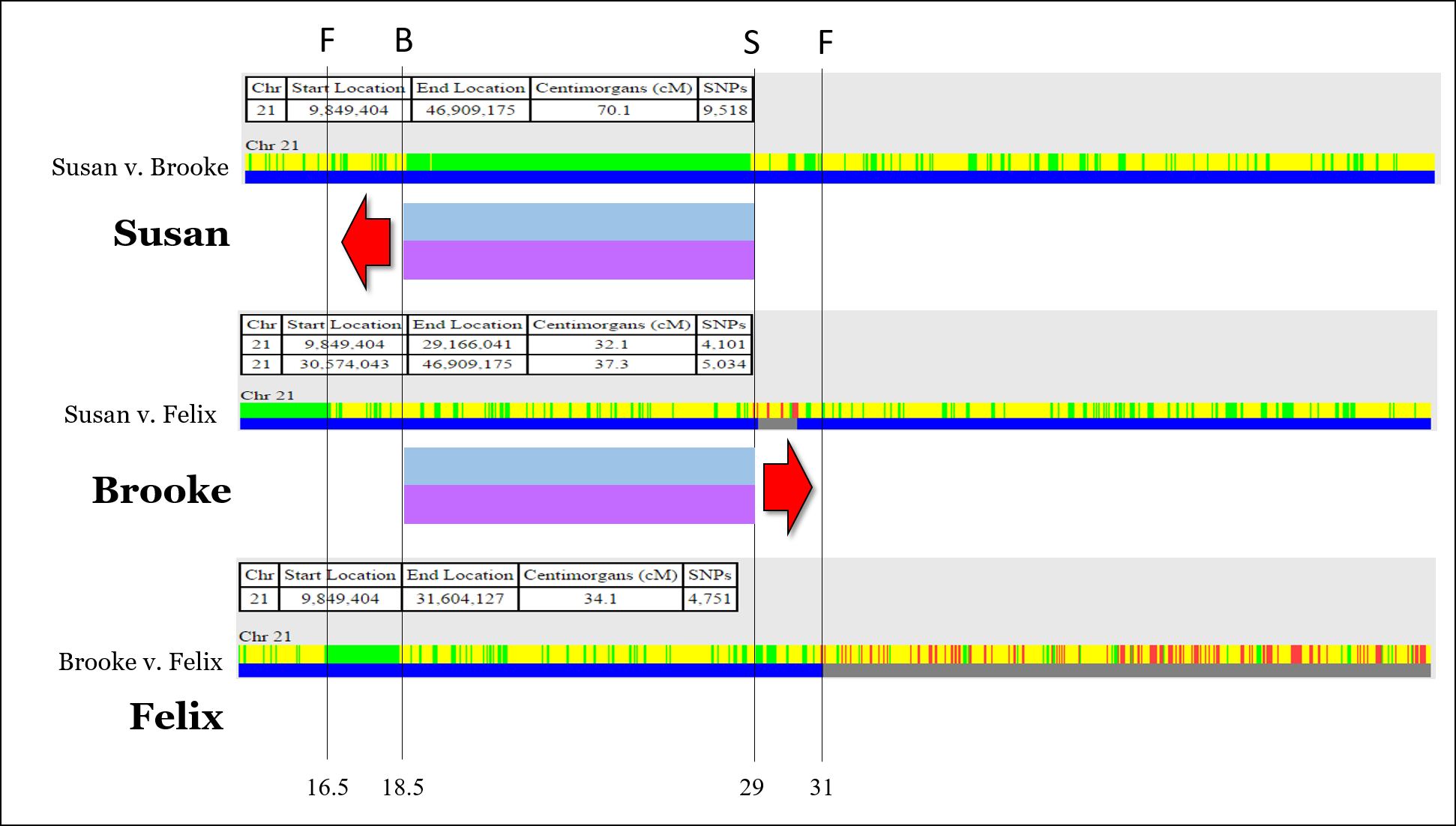 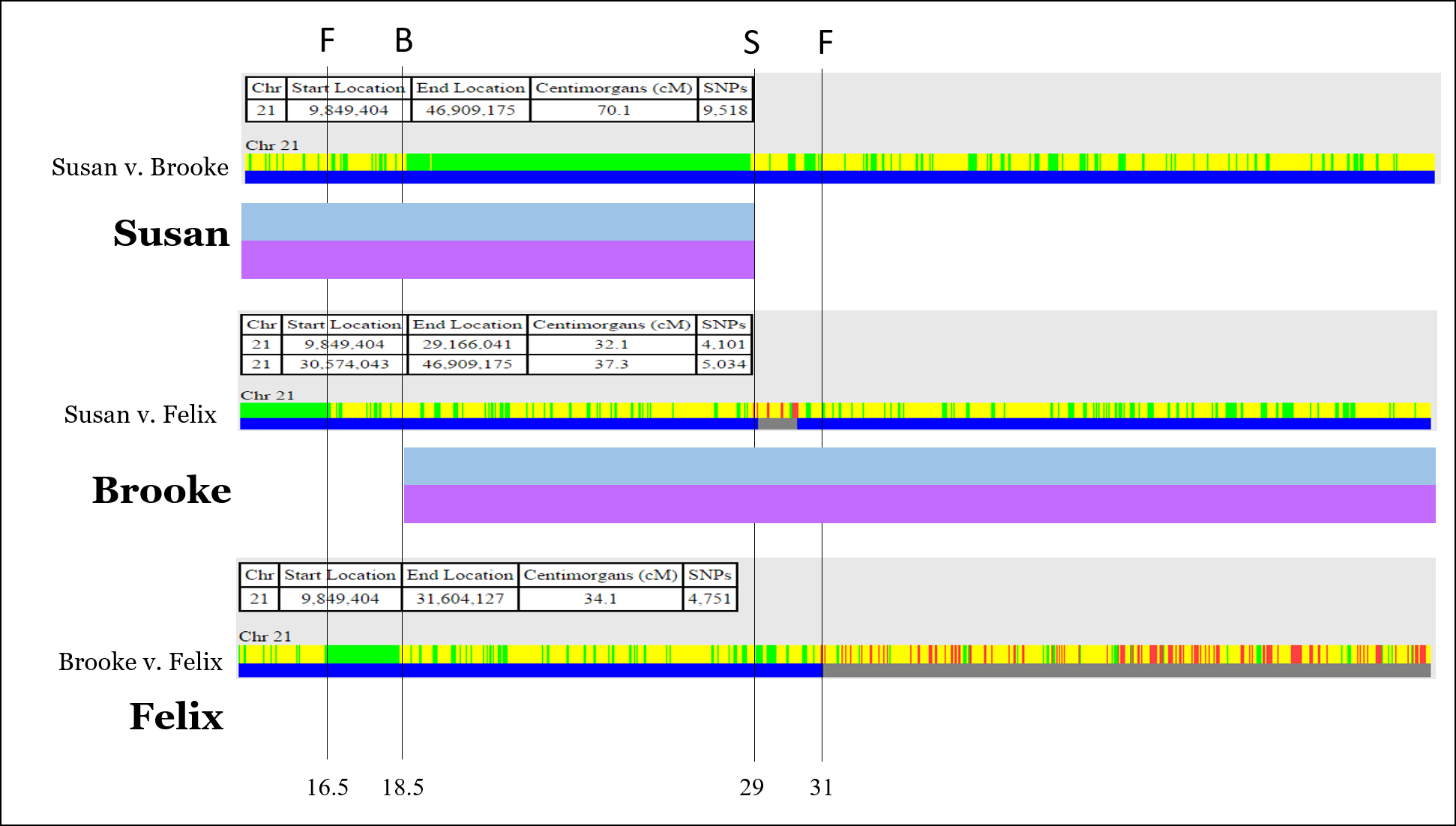 Now that we have Brooke’s entire chromosome to the right end, we can focus on the comparison of Brooke and Felix. As shown in the red square in the next image, Felix and Brooke share no DNA on the right half of the chromosome, from Felix’s recombination point to the end: 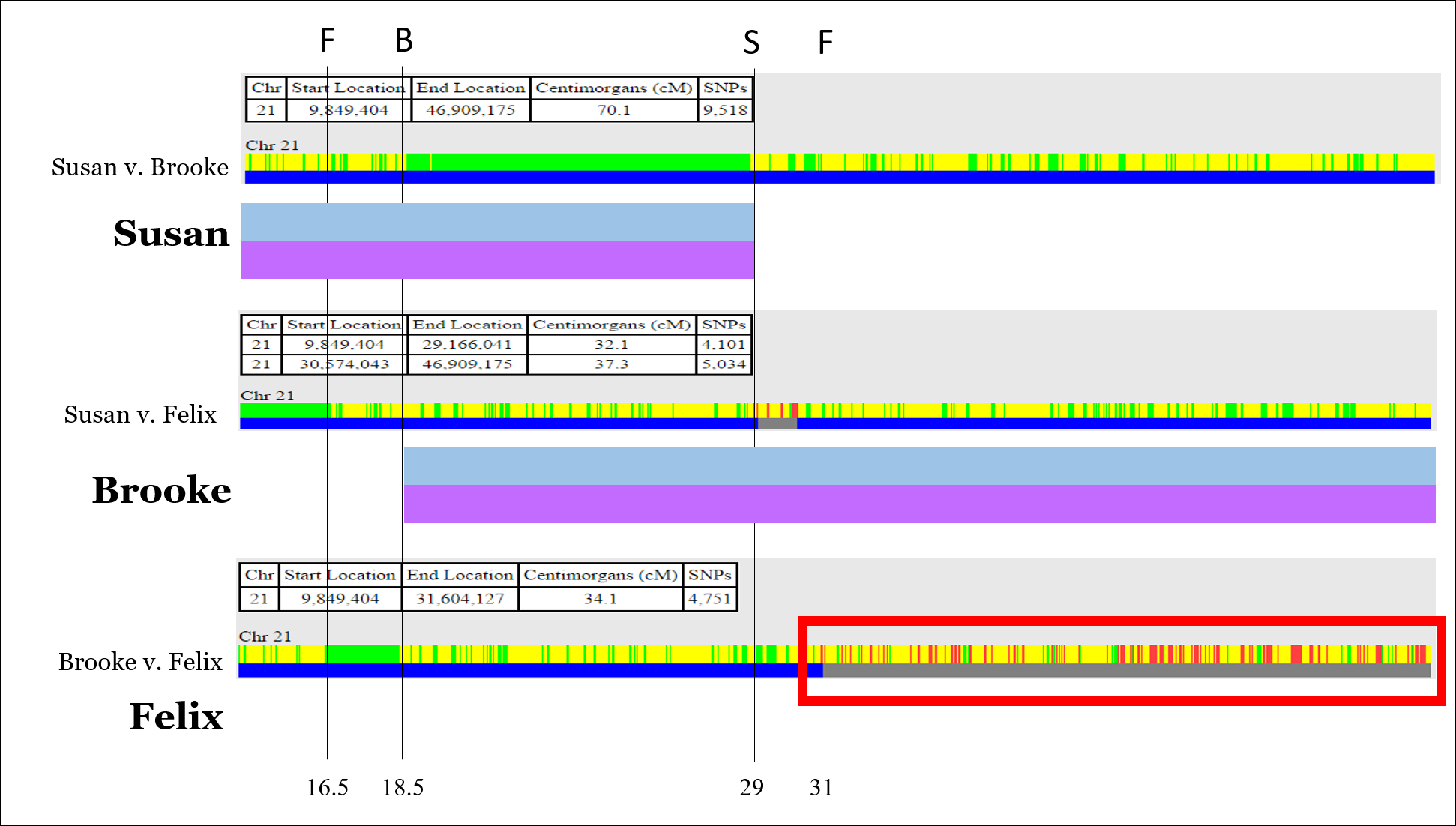 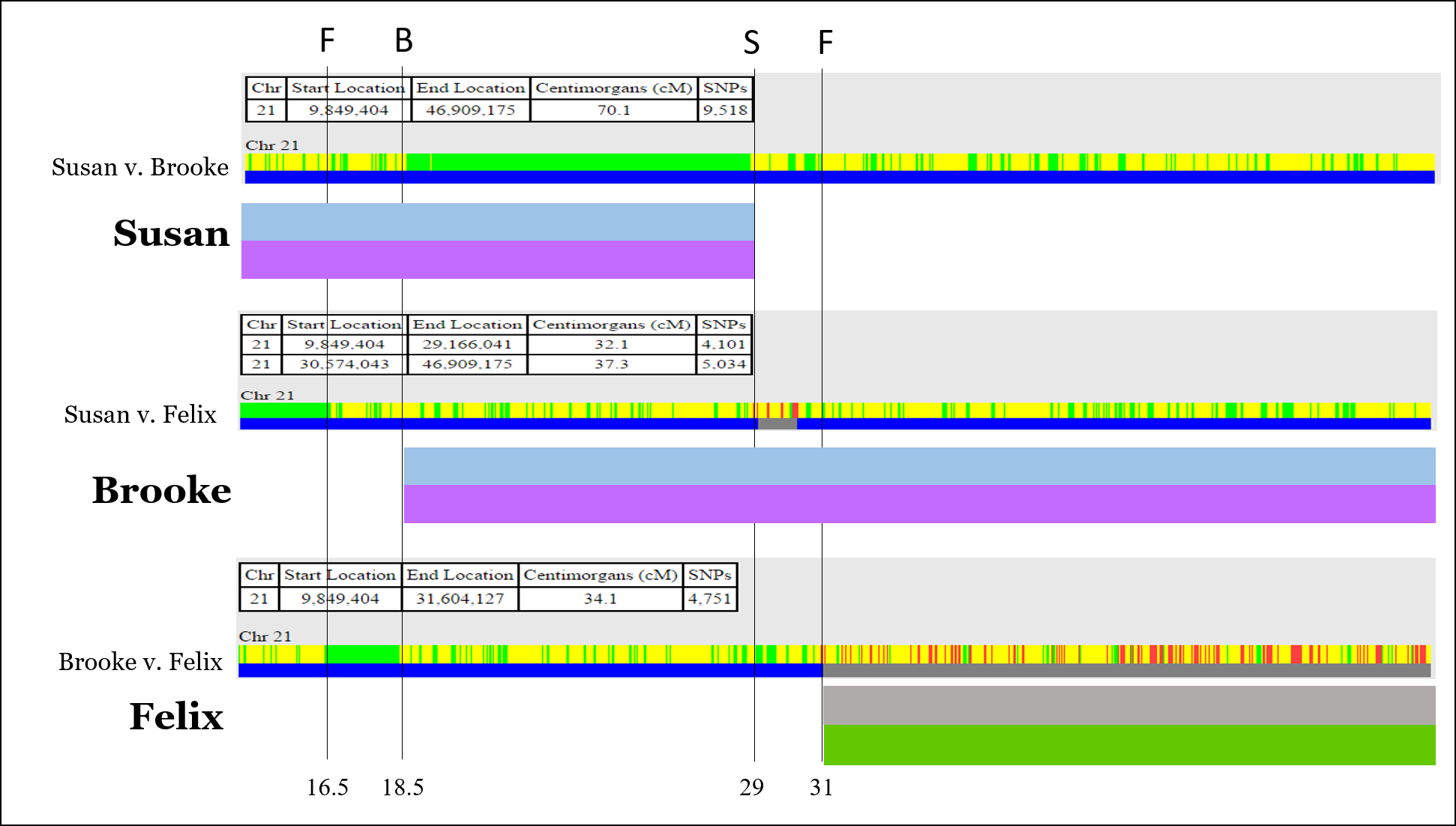 But now we’re stuck. For the most part (except for the left end of Felix’s chromosomes, which are identical to Susan’s), the GEDmatch One-to-One comparisons don’t help us fill out the remainder of the chromosomes.

WARNING! Now comes the most confusing part of visual phasing!

This took me a while to figure out and become comfortable with, and it can be difficult to explain. Essentially, we have to make an arbitrary decision at this point, but this it the only arbitrary decision we can make. Once we make it, we’re stuck with our decision.This effectively cements a certain color combination as ‘maternal” and the other color combination as “paternal,” although I don’t yet know which is which.

Each of Susan, Brooke, and Felix experience a recombination event at this point. We’re going to chose one person, and one chromosome, to extend. Once we do that, the relationship of all the colored segments to each other is fixed, and we won’t be able to arbitrarily decide which chromosomes to extend from the other two people.

So we have to extend a chromosome at one of the following red arrows: 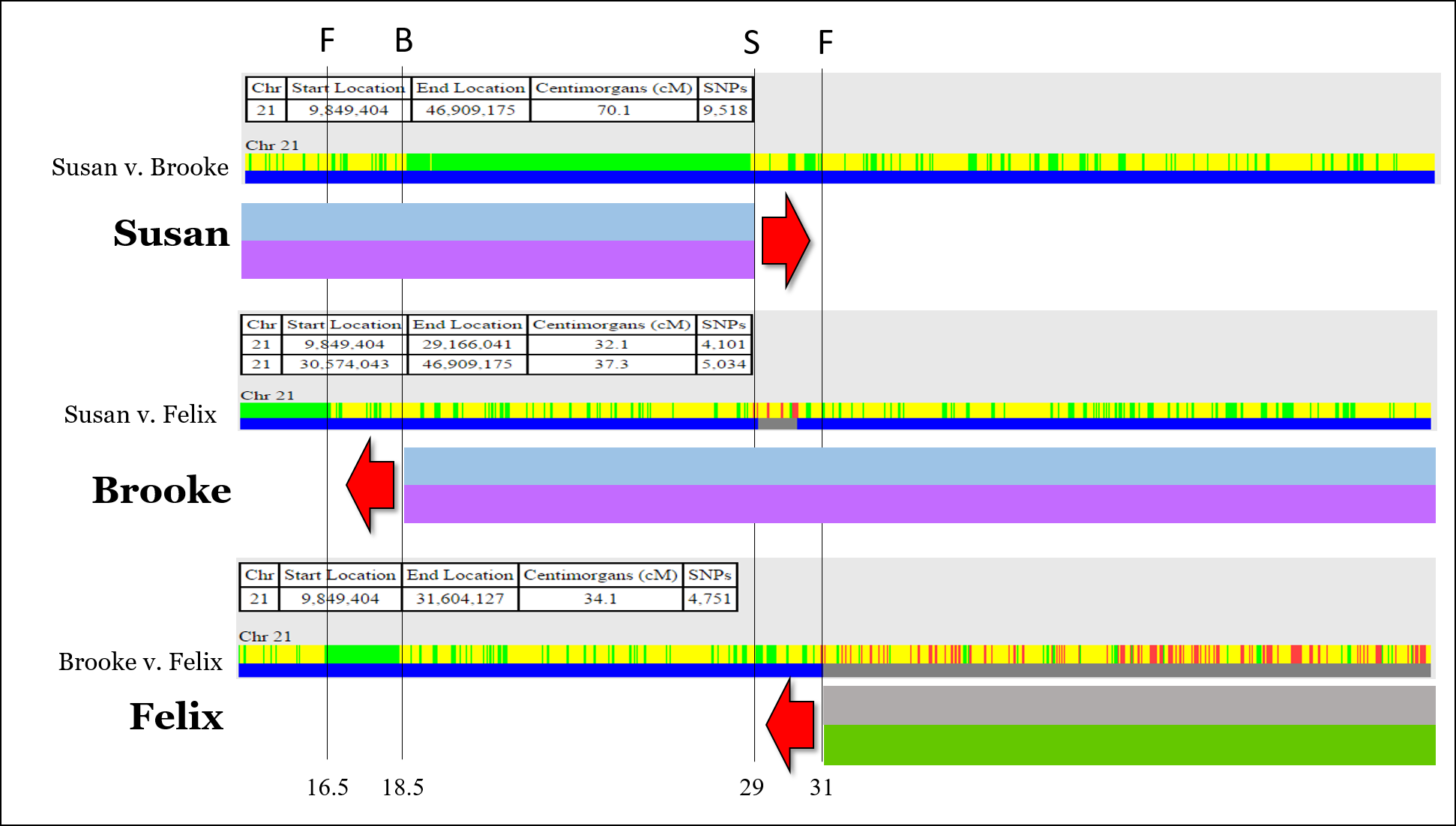 KEY TIP: This decision point is a good place to come back to if you think you’ve made a mistake, or if the chromosome you decided to extend wasn’t helpful. For example, in the image above, extending Brooke’s segment and finishing her chromosomes might not allow us to complete the entire puzzle. 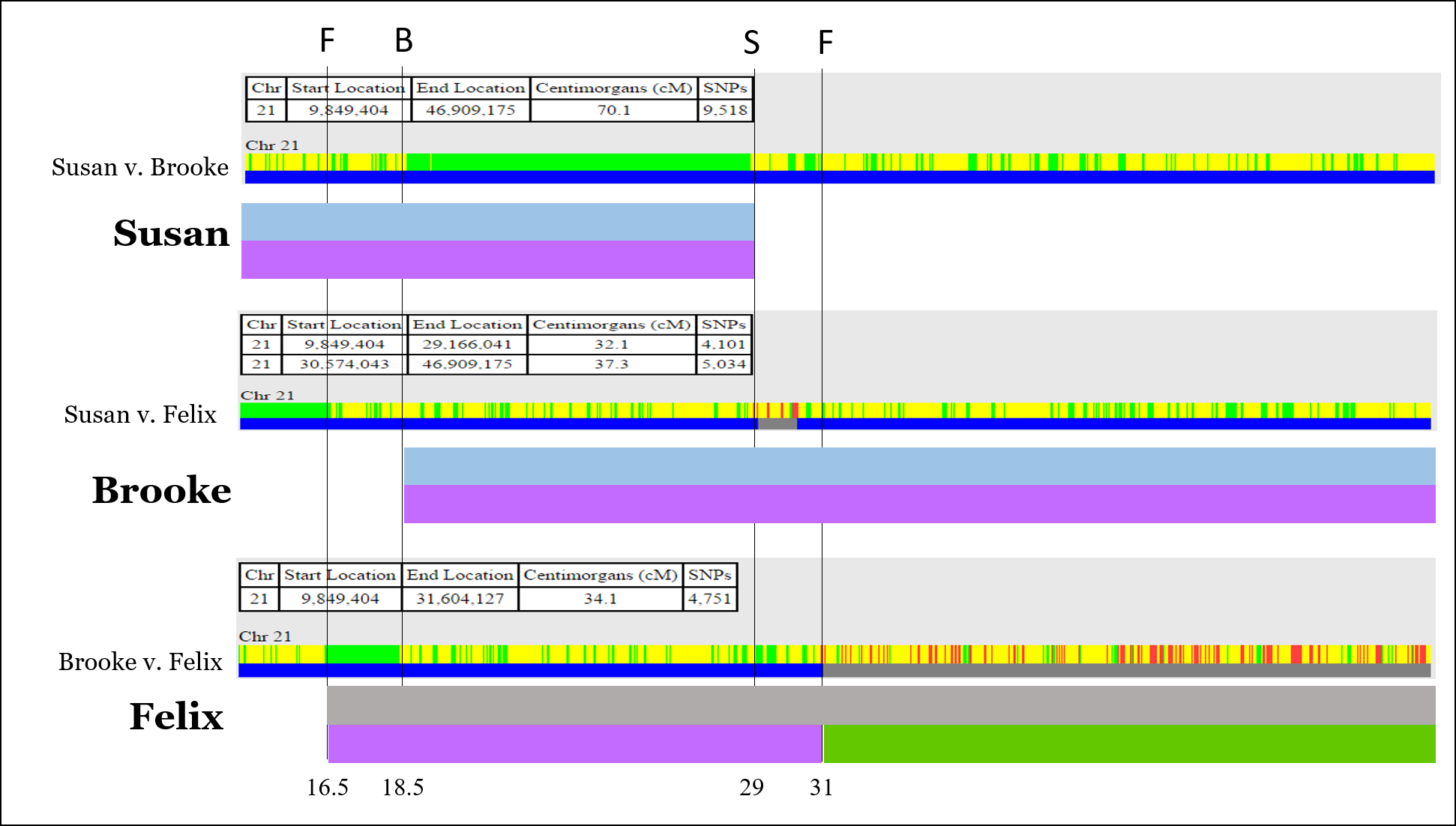 So we can’t arbitrarily decide which segments to extend in Brooke and Susan, instead we have to go back to the GEDmatch One-to-One comparisons.

We see that Brooke and Felix share on both chromosomes in the region shown by the red box in the next figure: 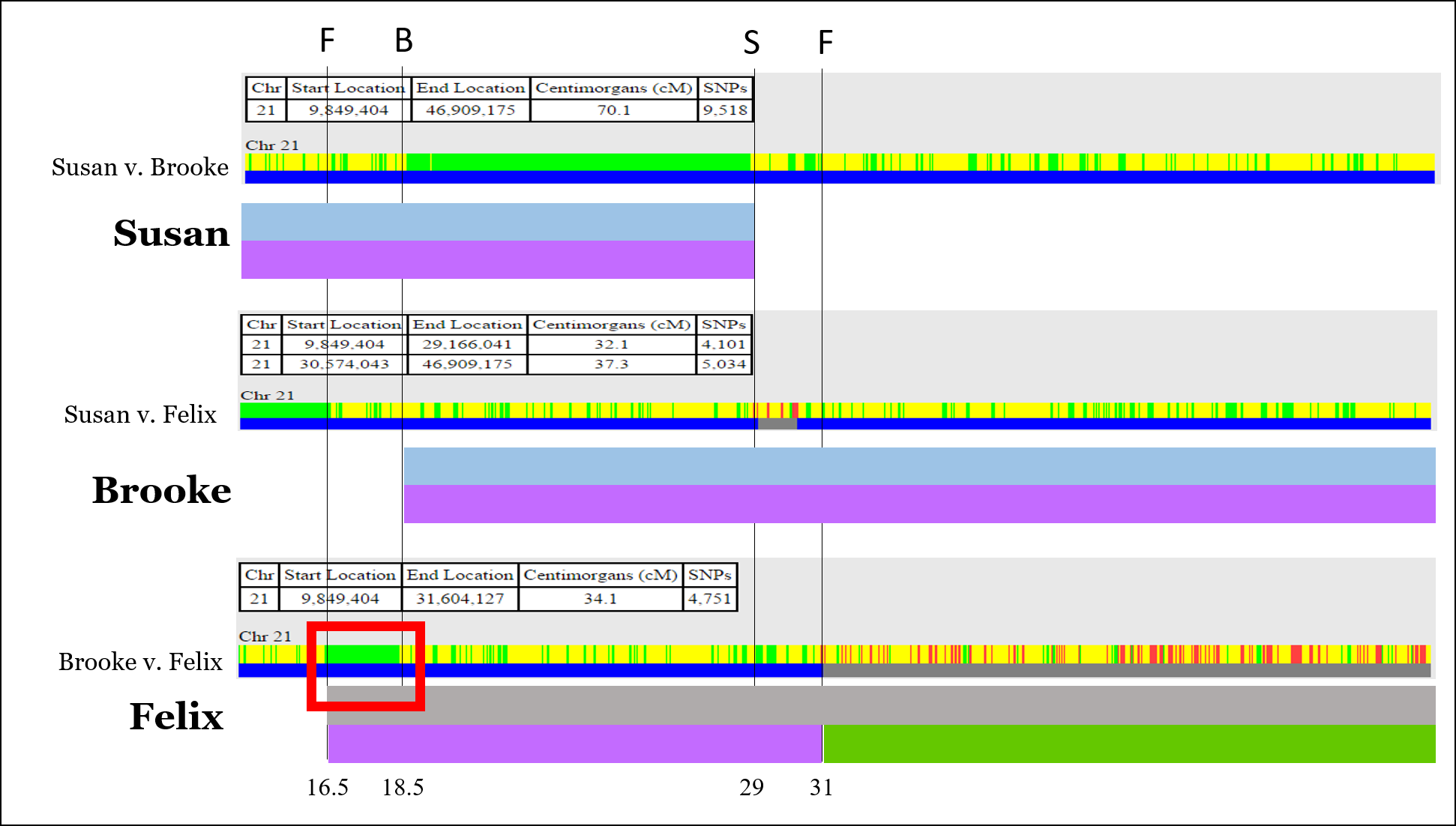 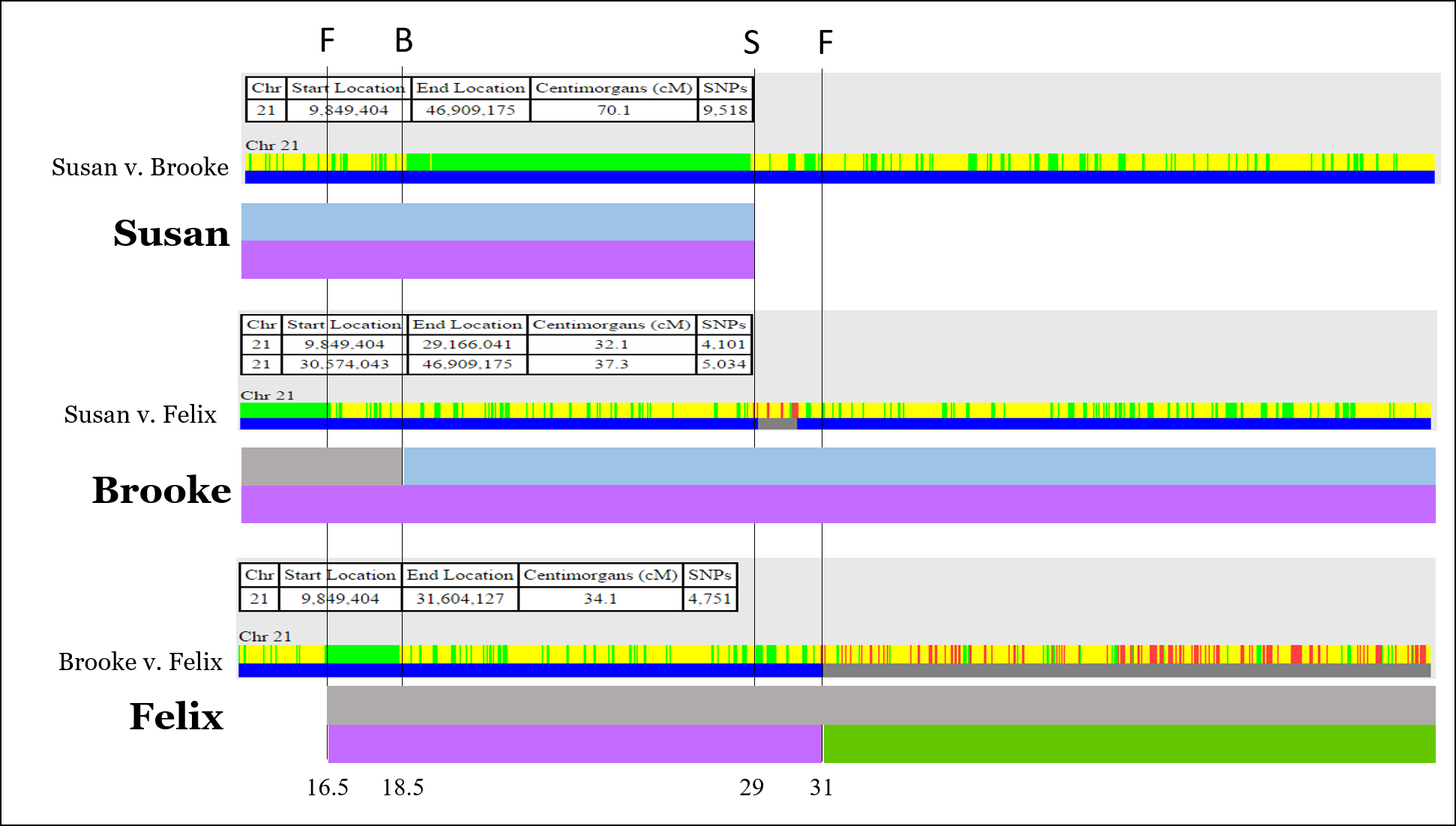 We see that Susan and Felix share on both chromosomes at the region shown by the red box in the next figure: 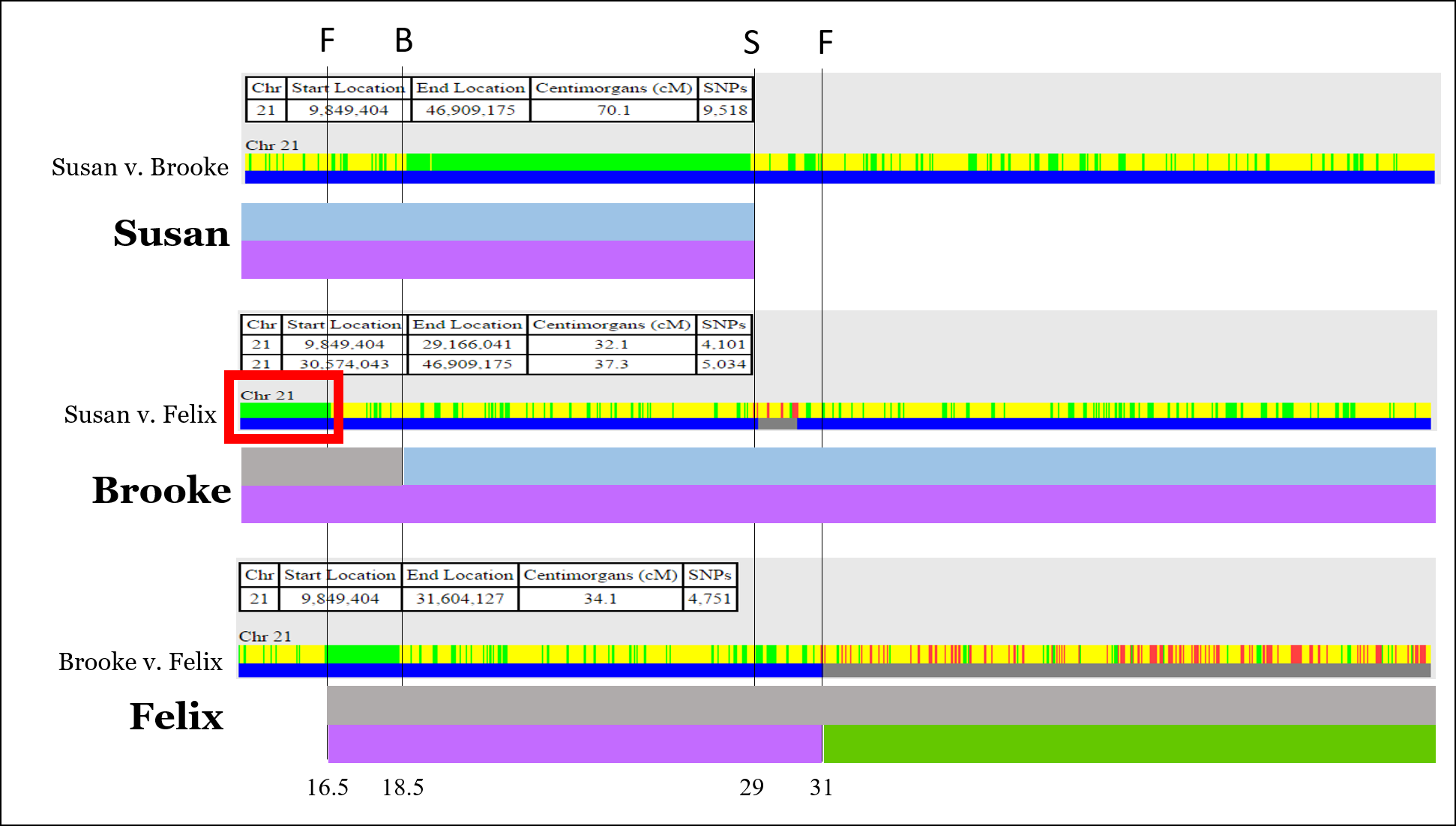 So we can fill that out for Felix: 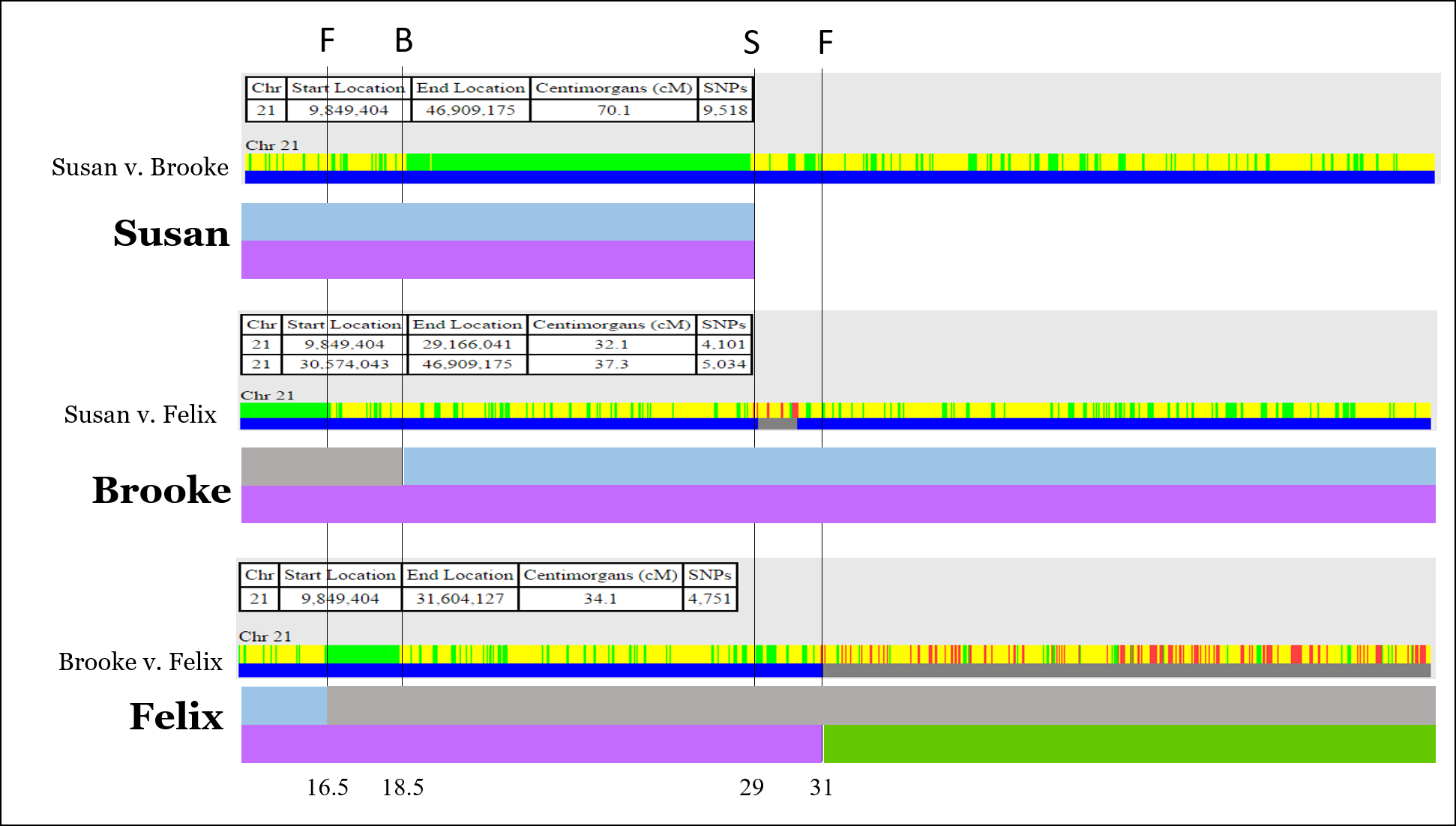 We see that Susan and Felix share NO DNA on either chromosome at the region shown by the red box in the next figure: 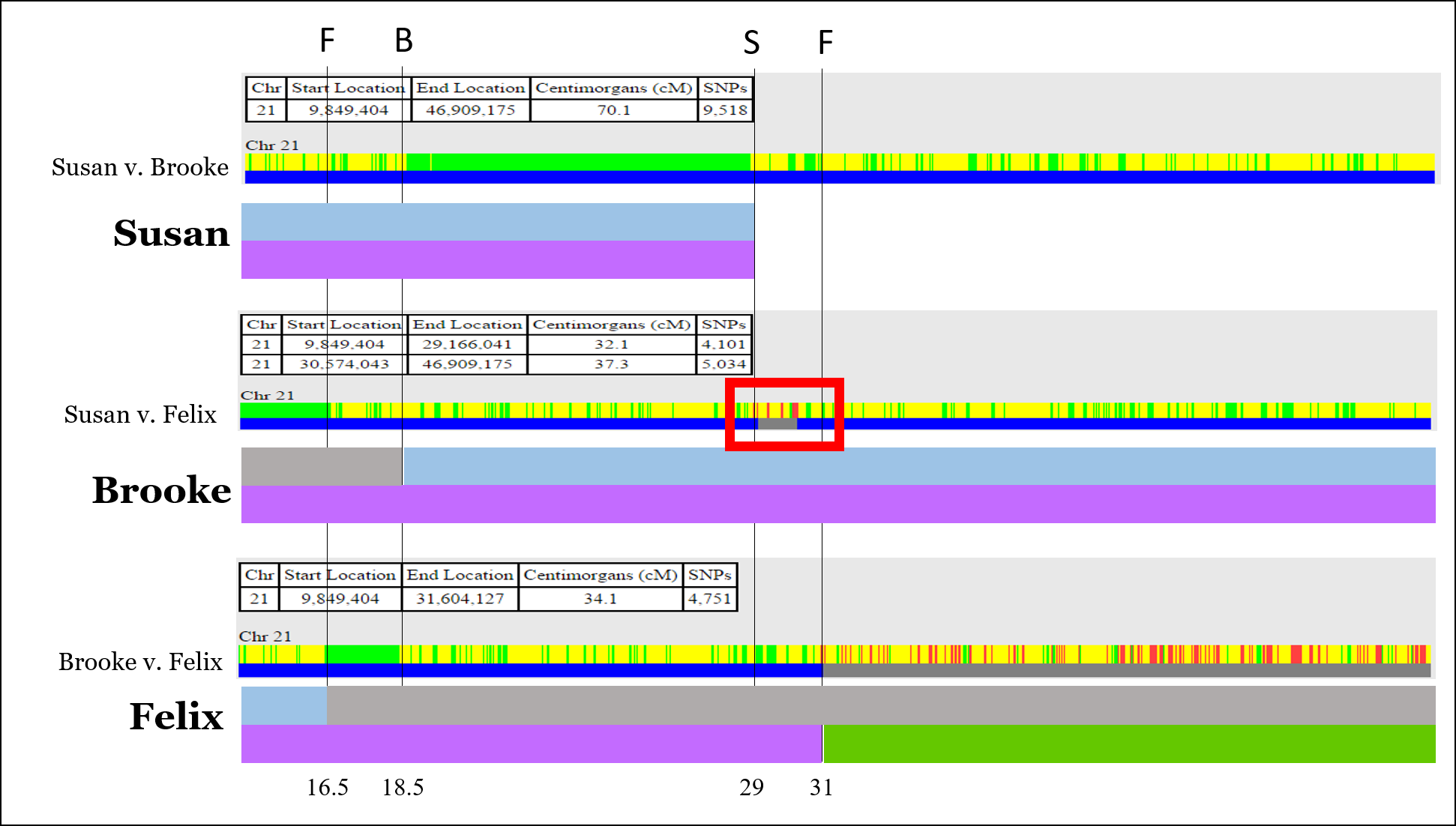 So we can fill in that region for Susan, using the colors opposite Felix at that region (Felix has gray and purple, so Susan must have blue and green), and we can extend that all the way to the end of the chromosome: 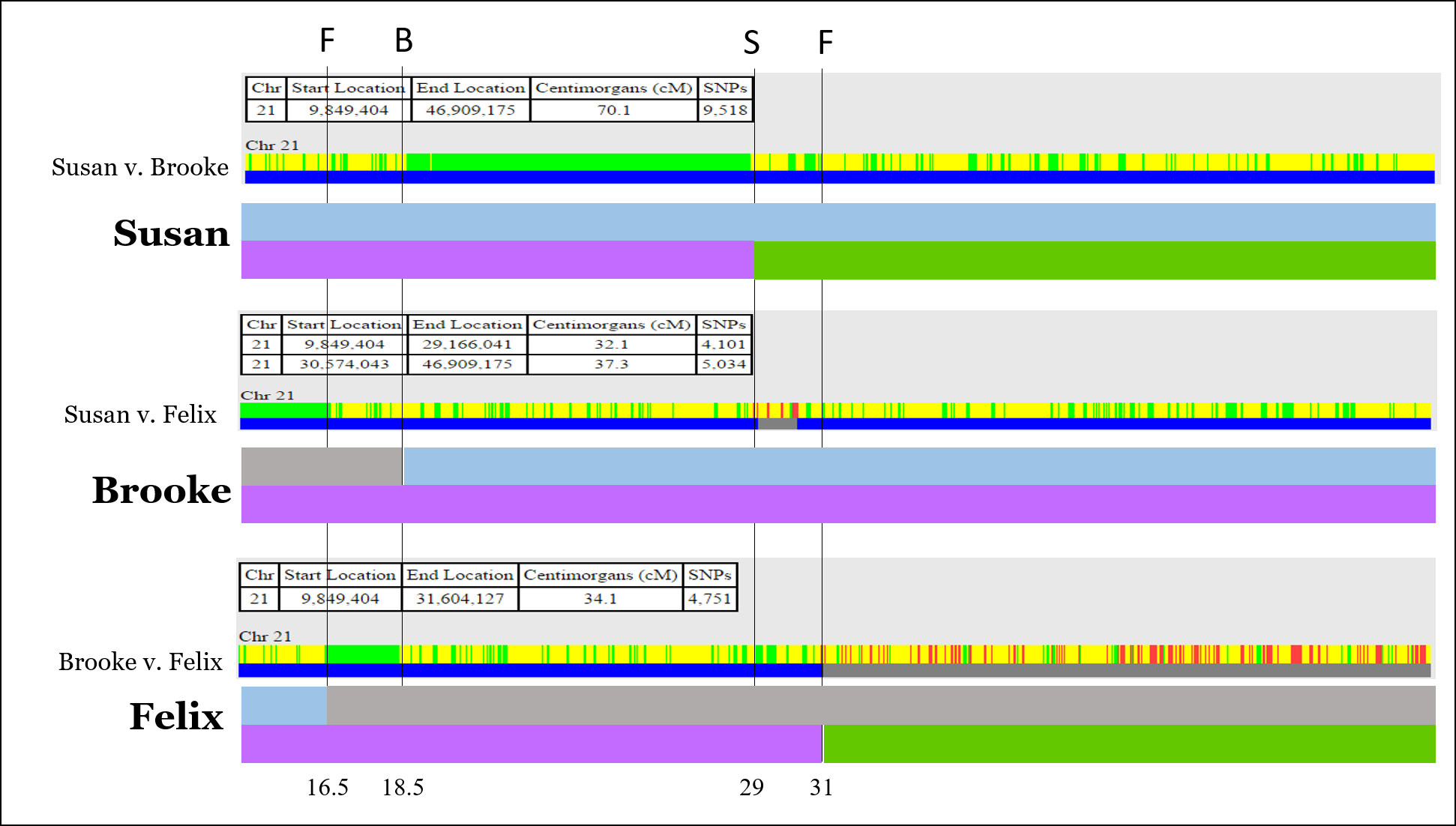 I know that blue and gray are one side of the family, and that purple and green are the other side of the family. But I don’t know, yet, which is which. In the next part, we’ll use cousin matches to deduce which combination is maternal and which is paternal, and hopefully we’ll determine which segments belonged to which grandparent.