But without more information, we don’t know to which grandparent each segment belongs.

In this example, I have a maternal aunt and a maternal uncle to whom I can compare the three siblings. This won’t allow me to identify particular grandparents, but it will allow me to determine maternal versus paternal.

In this first comparison, we use a maternal uncle:

Looking at Felix’s comparison to the maternal uncle, we see that the uncle must be matching the blue segment at the left end of chromosome 21; if he were matching the purple, he would also match Brooke at that region. So this suggests that the blue and gray chromosomes are maternal.

In this next comparison, we’ll use a maternal aunt: 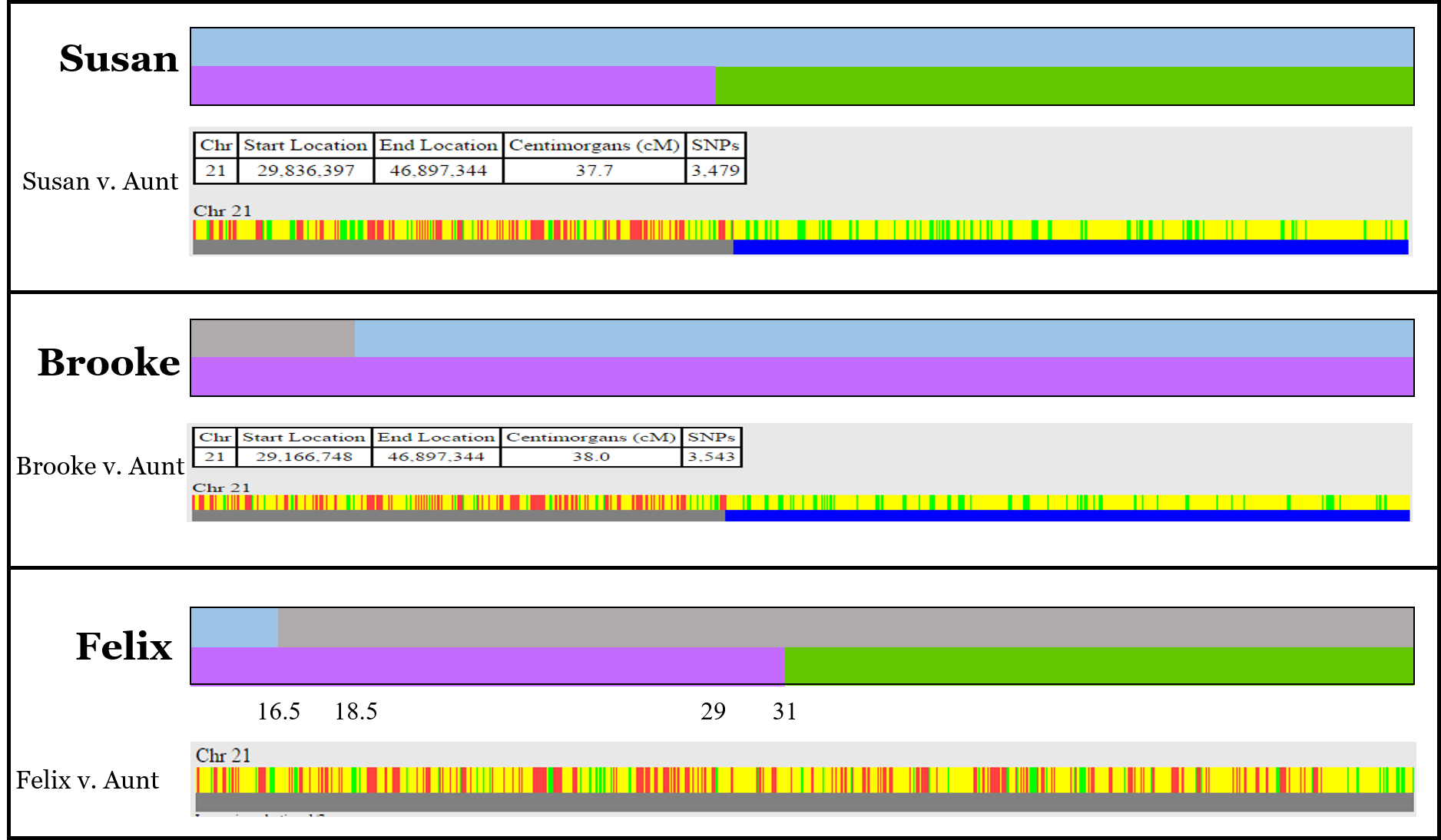 Looking at Susan’s comparison to the maternal aunt, we see that the aunt must be matching the blue segment at the right half of chromosome 21; if she were matching the green segment, then she would also match Felix at that region. This again suggests that the blue and gray chromosomes are maternal.

Let’s see if we can break down “maternal” and “paternal” into each of the four grandparents. Here is the family tree for Brooke, Susan, and Felix: 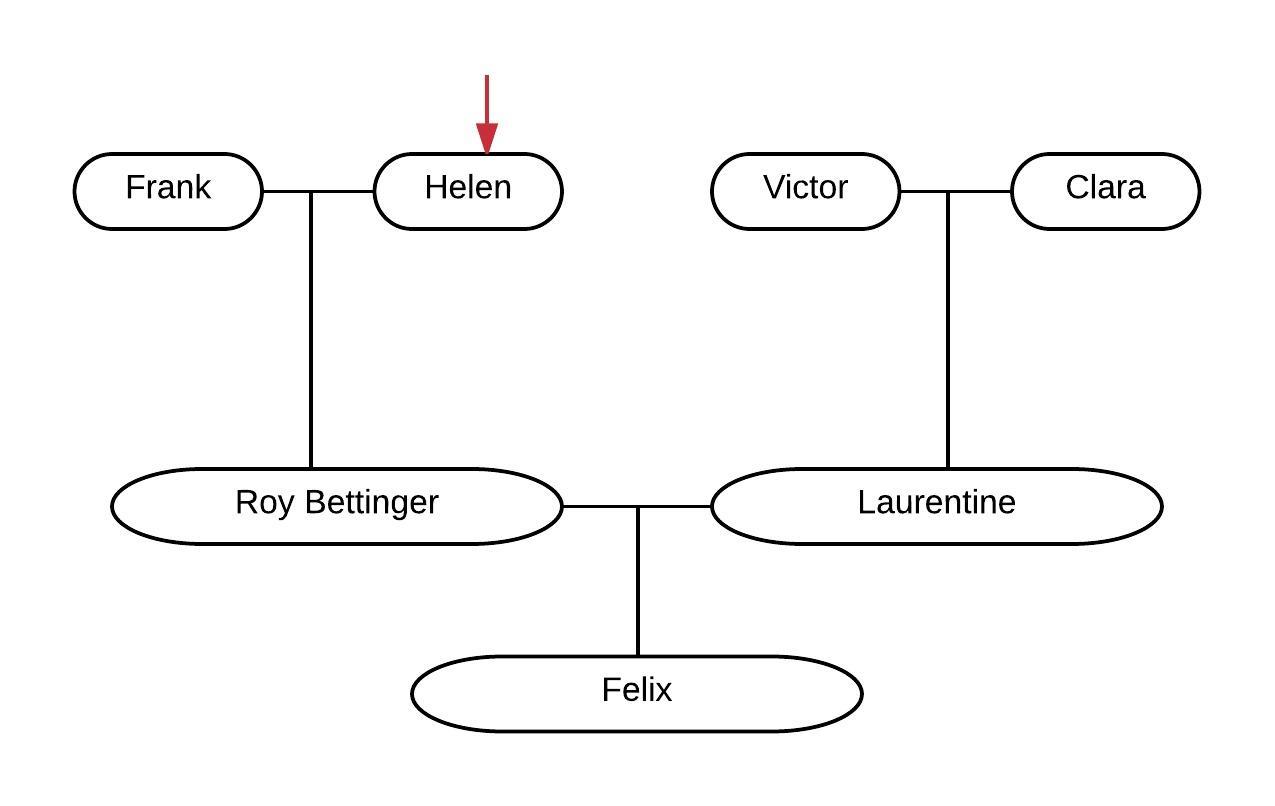 I have a handful of matches that I know are through Helen. Thus, if I can use that match to figure out whether Helen is the green or purple grandparent, I will also be able to determine Frank’s segments as well (by process of elimination).

Here is the comparison of Brooke, Susan, and Felix to the match: 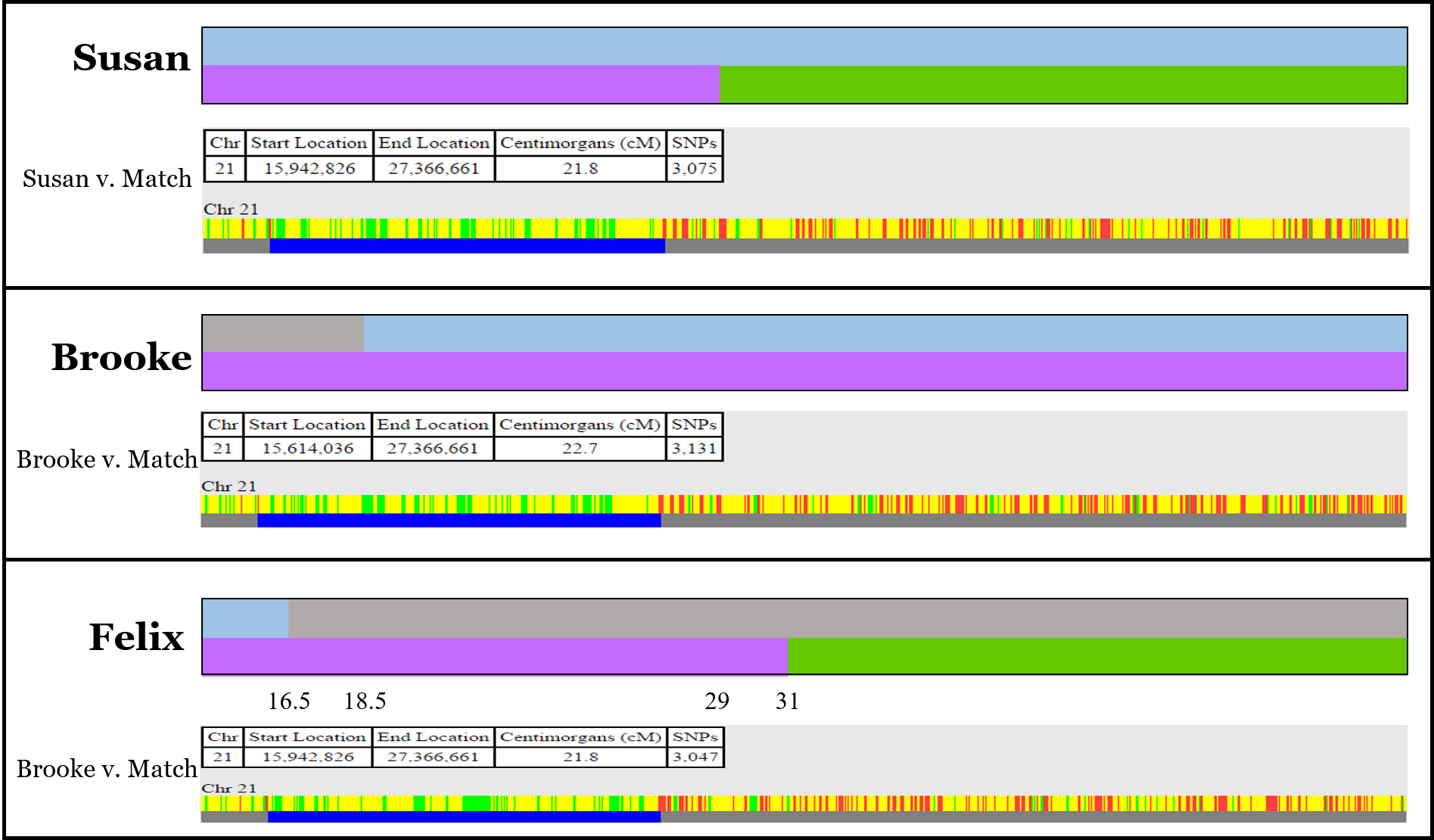 The match is clearly matching the purple segment, so Helen Johnson is the purple grandparent and Frank Bettinger is the green grandparent.

I don’t have a match that clearly identifies the source of the blue versus gray chromosomes, so that will require either targeted testing or waiting for a random match.

This is where the process of visual phasing ends, although we’ll want to break down the maternal chromosomes in the future, if we can. Now, for example, when a new match comes in that matches the right half of chromosome 21 with Susan and Felix, we know that the match is via Frank Bettinger, narrowing the search down to 25% from 100% of the family tree. Or, if someone matches only Brooke on the right half of chromosome 21, the match has to be through Helen Johnson.

In Part 3 of the series, we’ll use these three phased and labeled chromosomes, which belong to my father and two aunts, to characterize my own paternal chromosome.