Genealogical autosomal DNA evidence relies on segments of DNA shared between two or more individuals. When they are true matching segments, they provide information about shared ancestry. One problem that genealogists are currently facing is the inability to decipher between “real” or “true” matching segments and “false” segments.

I won’t get too much into all the different terminology of “real” versus “false” here, because it isn’t important and takes away from the more important discussion. Genealogists, like patent attorneys, can be their own lexicographer, just so long as they are understood by the reader by providing a good definition. So here are my definitions for this post (and I typically use these elsewhere): 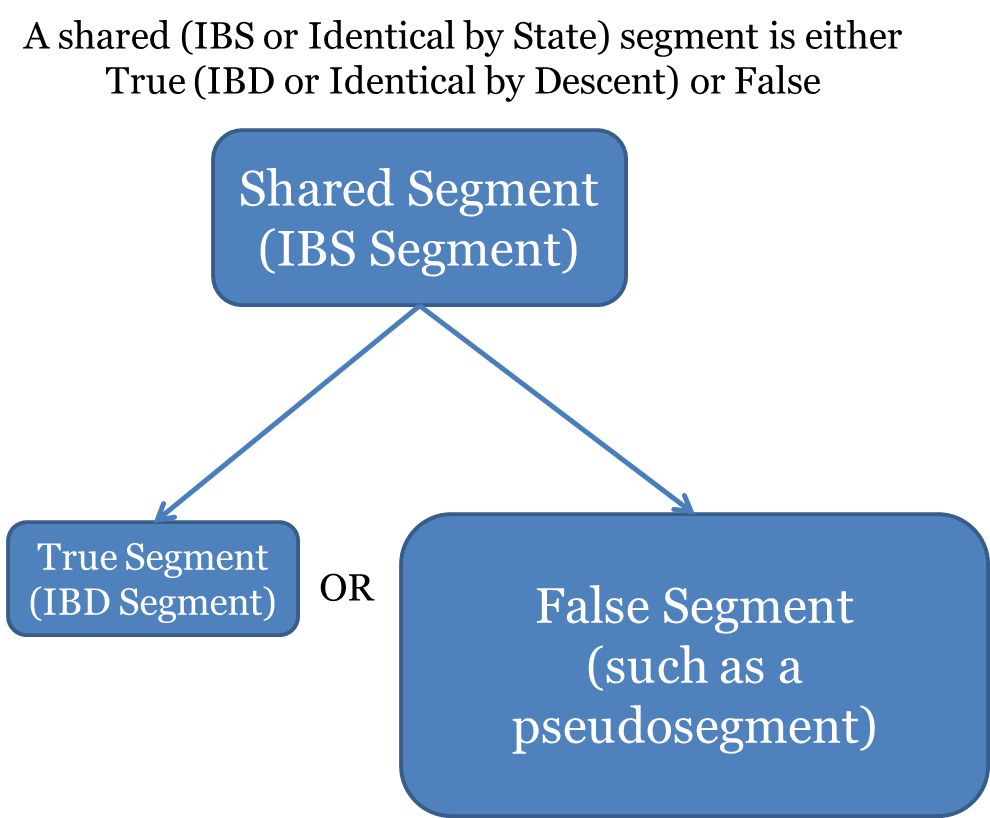 In January, I wrote “The Danger of Distant Matches,” in which I compared my list of DNA matches with the lists for my mother and my father. In that analysis, I discovered that 32% of my matches at AncestryDNA were not shared by either parent. The vast majority of those matches shared only small segments with me. Of these matches, the breakdown looked like this

However, segments smaller than 10 cM should be considered suspect. This hypothesis is supported by other analyses (see “Identical by Descent” on the ISOGG Wiki).

[Note: the issue of the AGE of the segment is a related issue but won’t be addressed in detail in this post. Although a large segment is almost certainly IBD, it can still be very old. A 2015 paper by Speed and Balding showed that  around 40% of 20 mB segments (which we can roughly equate to 20 cM segments) date back beyond 10 generations. Although the study only used simulated data and I am not convinced that we understand the mechanisms of recombination and inheritance to rely solely on simulated data, this is the best data we have currently. See a discussion of the Speed and Balding paper at “Identical by Descent” on the ISOGG Wiki].

Another way to reduce false segments is to phase a child’s DNA into the parental chromosomes. This requires tested DNA for a child and at least one parent. The Phasing tool at GEDmatch performs phasing using DNA that has been uploaded to the third-party tool:

These phased kits are hypothesized to significantly reduce false segments. Specifically, since there is only a single copy of each chromosome in each phased kit (Mom’s chromosome in the maternal kit and Dad’s chromosome in the paternal kit), the matching algorithm cannot weave back and forth between mixed results to create a pseudosegment. The following illustration emphasizes this point. In the Unphased Results, the matching algorithm can form any matching segment using the results from BOTH Mom and Dad. Using the Phased Result, there can only be a match if the compared segment and the phased segment match (which they do not in this illustration): 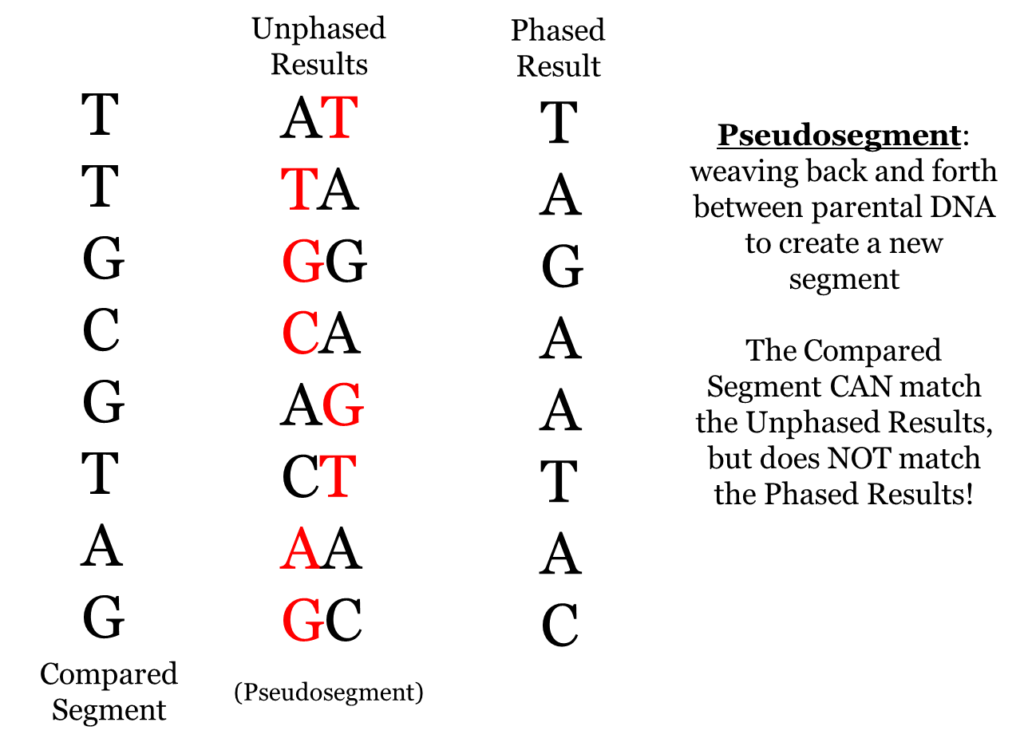 I have tested myself and both my parents using the AncestryDNA V1 chip, and uploaded all of the results to GEDmatch. I then phased my DNA into maternal and paternal kits using BOTH of my parents (triad phasing). I then determined how many matches at GEDmatch I have with my unphased kit versus my maternal phased kit and my paternal phased kit (many others, especially Ann Turner, have performed a similar analysis).

As the following table shows, phasing significantly reduced the number of distant matches I had at GEDmatch:

The biggest reduction in matches, not surprisingly, was at the 5 cM and 7 cM levels. For example, at 5 cM and greater, I lost 82% of my matches due to phasing. Even at 10 cM, I lost 25% of my matches.

In a future analysis, I’d like to review the matches I lost above 20 cM. My very preliminary hypothesis is that these were not completely lost by phasing, but were reduced to a smaller size. However, this requires additional analysis.

In the previous experiment, I phased MY DNA using both of my parents (you can also phase with just one parent).

However, I was not able to test any of my grandparents, so I cannot phase my parents using the traditional phasing tool. I can, however, using tools at GEDmatch to phase my parent’s DNA into single chromosomes, which might significantly reduce false matching segments.

I’ll do this with a combination of the Phasing tool and the My Evil Twin Phasing tool, a Tier 1 tool available at GEDmatch. 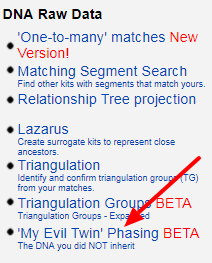 The My Evil Twin Phasing tool produces one or two files, depending on how many parents are used. If a mother is used, the tool will create a kit containing the mother’s DNA that the child DID NOT INHERIT! Thus, this kit will contain 50% of the mother’s DNA. The same is true if the father’s DNA is used. If both parents are used, a paternal and a maternal evil twin kit are created.

Together, a phased maternal kit and an evil twin maternal kit should contain (approximately) 100% of the mother’s DNA, separated into single chromosomes!

However, although these kits are separated into single chromosomes, they are not perfectly phased into the mother’s contribution from her mother and her contribution from her father. Instead, these kits are “imperfectly phased”; separated into single chromosomes which are a mix of the mother’s mother and father. The following two diagrams illustrate the difference between “perfect phasing” and “imperfect phasing”: 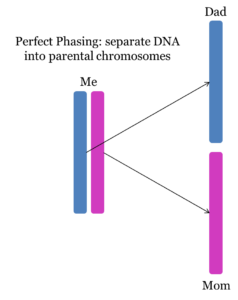 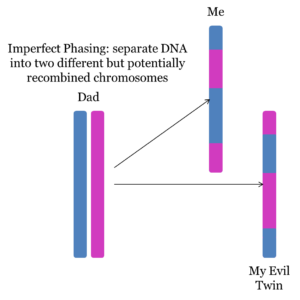 As the following table shows, phasing significantly reduced the number of distant matches 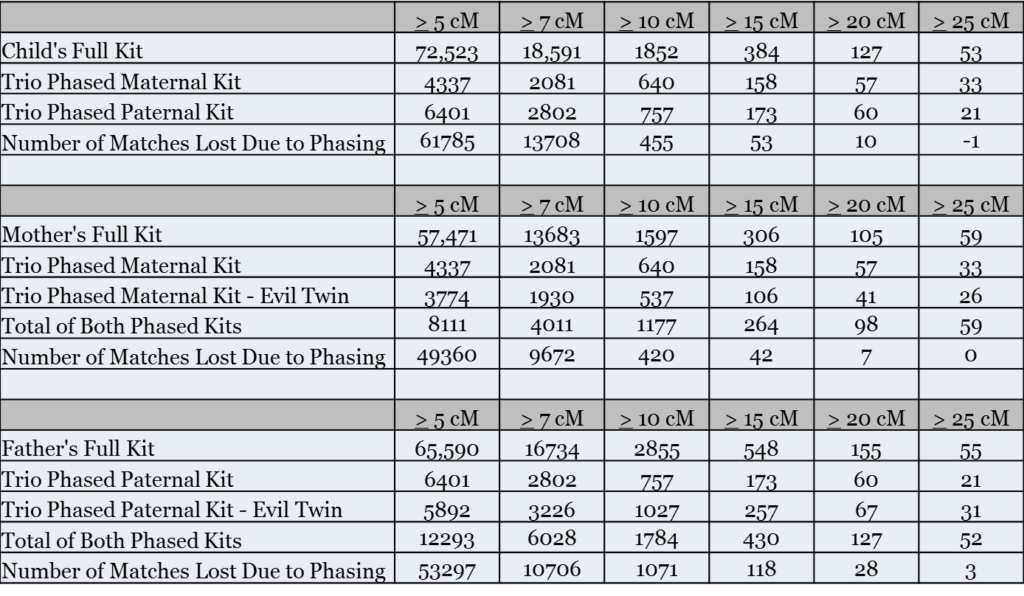 Notably, Imperfect Phasing WILL destroy some true large segments. As shown in the following diagram, a segment that matches the blue (paternal grandfather’s) chromosome in the red box may be shortened or lost due to recombination in the middle of that segment. Phasing will not recover that segment: 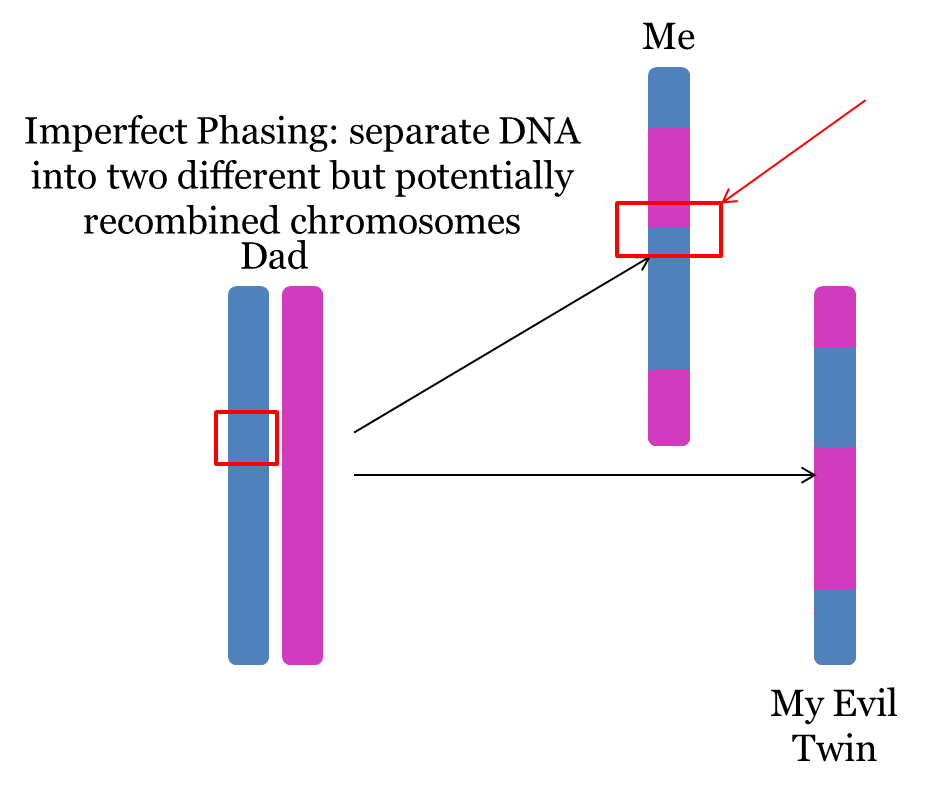 Accordingly, we must be careful about making unsupported conclusions using these imperfectly phased parental chromosomes.

We might create parental phased kits in order to work with smaller segments with increased confidence in those segments. For example, we may have much greater confidence in the segments 10 cM and larger as a result of this phasing (keeping in mind the age issue described above).

There may be other interesting uses for these kits, and I’d love to hear your thoughts!