How is that possible?

Last fall during the sales at Family Tree DNA, I ordered an mtDNA test for my mother. Now, usually there isn’t a need to test your mother’s mtDNA if you’ve tested your own, and vice versa. You should have the same mtDNA results, and in almost all cases you will.

However, I decided to test my mother because I have a mutation that puts me at an mtDNA genetic distance of 1 relative to matches that are likely related about 200 years ago in the Caymans where my mtDNA came from. That mutation always bugged me. Although it certainly isn’t unusual to have a GD=1 at 200 years, my maternal line is a work in progress so I want as much information as possible. So I decided to “walk back” the mtDNA line as far as I could. Although my mother was only one generation further back, it couldn’t hurt to have her mtDNA sequenced just in case it could shed light on this mutation (and, frankly, the sale was too good to pass up!).

When I received her test results and logged in, I was surprised to learn that I am not in my mother’s match list, and she is not in mine! Since we both have full mtDNA sequences, that means that we have a genetic distance of FOUR or greater! Four mutations in a single generation? How is that possible? As it turns out, it may not be as difficult as we think.

When I compared my results to my Mom’s results, I see the four differences that prevent us from being shown as matches. We match exactly, with the exception of the differences shown in this table: 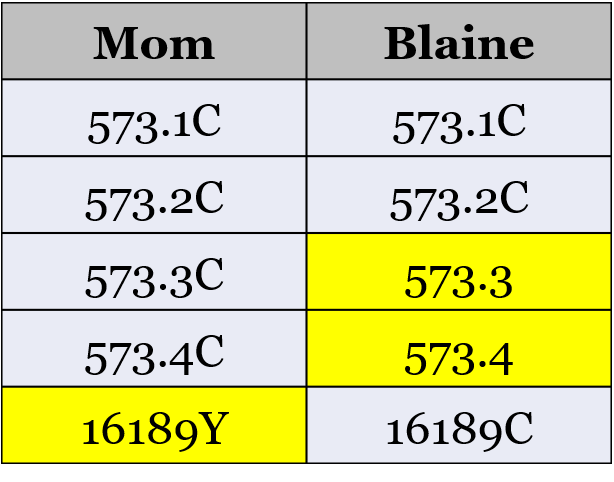 This region of the mtDNA has at least 6 cytosine bases (“C”) in a row, from position 568 to 573. In the table below is this stretch of the mtDNA, shown as the revised Cambridge Reference Sequence (rCRS):

Technically, extra Cs in this region are added to the last C, or 573, out of necessity rather than an actual identification of the insertion location. That’s because there’s no way to determine if a C is inserted between 568 and 569 during replication of the mtDNA genome, or between 569 and 570, so for convenience extra Cs are added at the end of the stretch as 573.1, and so on.

It appears that my mother’s mtDNA has two extra insertions that I don’t have. Perhaps her buccal cells randomly received these two extra Cs during her fetal development while her eggs cell(s) did not have these Cs, or perhaps her egg cell(s) removed two Cs. A comparison of my mom’s poly-cytosine stretch and my stretch look like this:

We have something like 3 trillion cells in our body, almost all with a copy of our DNA. It shouldn’t be a surprise that there are differences in those three trillion copies. If you have to copy 3 billion letters 3 trillion times, you’d make mistakes too! In reality, we’re a walking bag of millions of different genomes (although the differences are typically only a handful of bases).

“Y” is a letter used to represent one of the many different possibilities for mixes of nucleotides at a position. Family Tree DNA provides the heteroplasmy nomenclature: 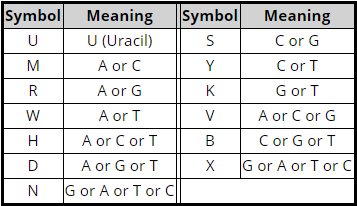 Family Tree DNA can only detect heteroplasmies if the minor allele (meaning the version that is less common in the sample) is present at a concentration of at least 20%. If it is below 20%, the heteroplasmy is too difficult to detect.

It is possible that I have some “T” at position 16189 in some of my mtDNA, although the concentration must be lower than 20%. Heteroplasmies usually take MANY generations to become homoplasmies, to switch from a stable C to a combination of C and T to a stable T. It is extremely unlikely to happen in a single generation. Many and possibly even most of us are in the midst of a heteroplasmy transition. My mtDNA line appears to be in the midst of a transition from C to T at position 16,189.

I’m lucky to be able to add additional evidence to this analysis. I had my grandmother’s mtDNA first cousin, “Shelly”, autosomal DNA tested at Family Tree DNA, so I upgraded her kit to add an mtDNA test. Like my mother, Shelly inherited her mtDNA from my great-great-grandmother: 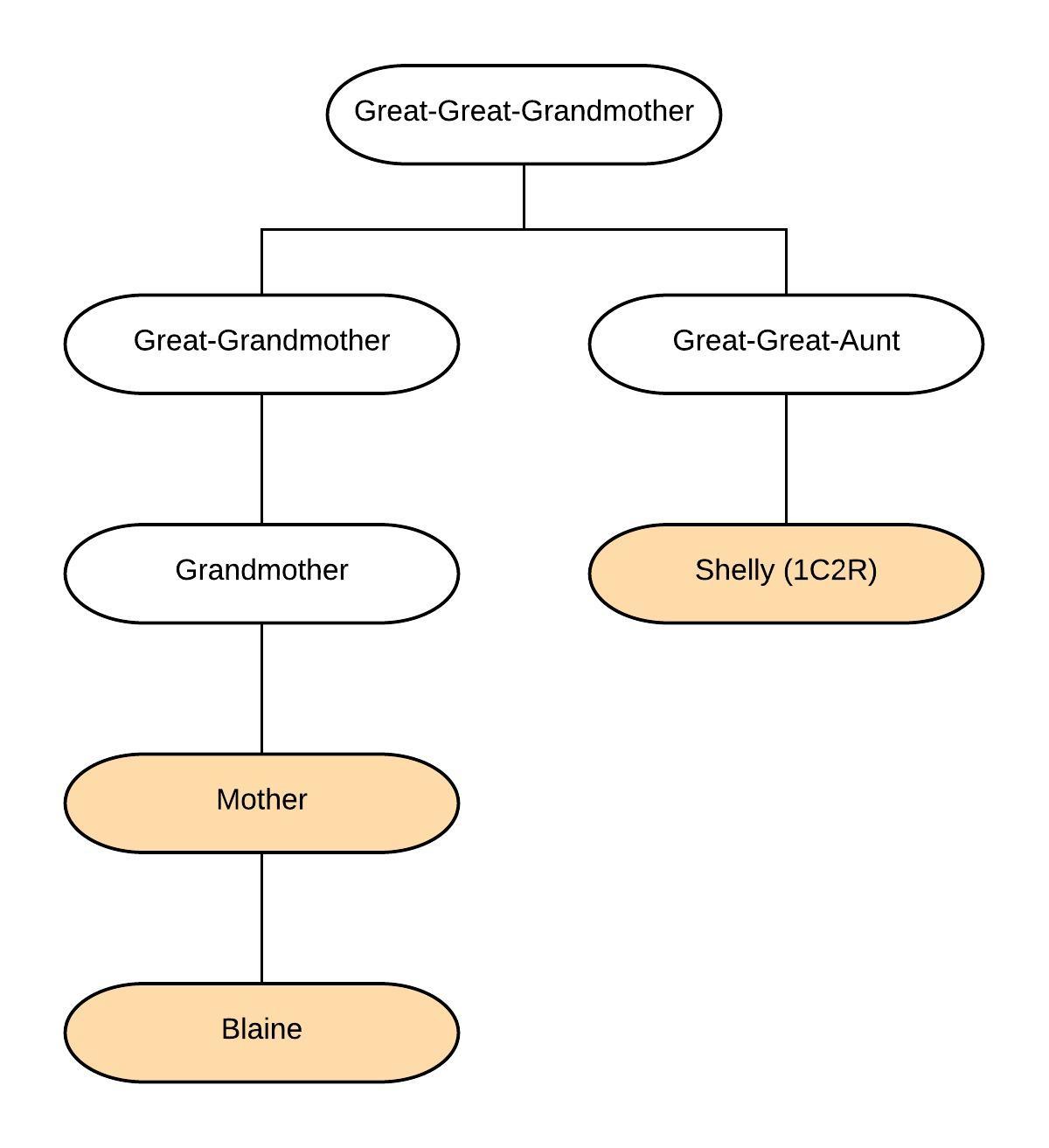 I expected Shelly’s results to resolve the issue of the poly-cytosine stretch around position 573. Was I the anomaly, or was my mother? 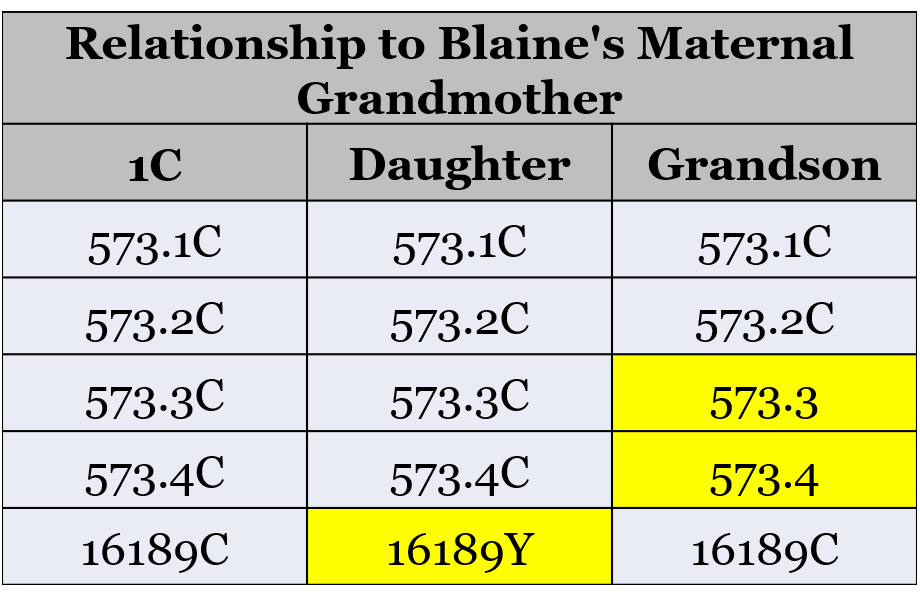 Shelly’s results meant that she matched my mother and I at exactly a genetic distance of 2 each. Here are my mtDNA results, showing that I match Shelly (1C1R) at a distance of 2:

Here are my mother’s results, showing she matches Shelly (1C1R) at a genetic distance of 2:

And here are Shelly’s results, showing that she matches each of us at a genetic distance of 2, acting as a bridge between my mother and me:

I continued to wonder about the extra Cs at position 573. Am I really missing them, or could I possibly have them?

Since my DNA was already on file at YSeq, a little less than four weeks later my results were ready: 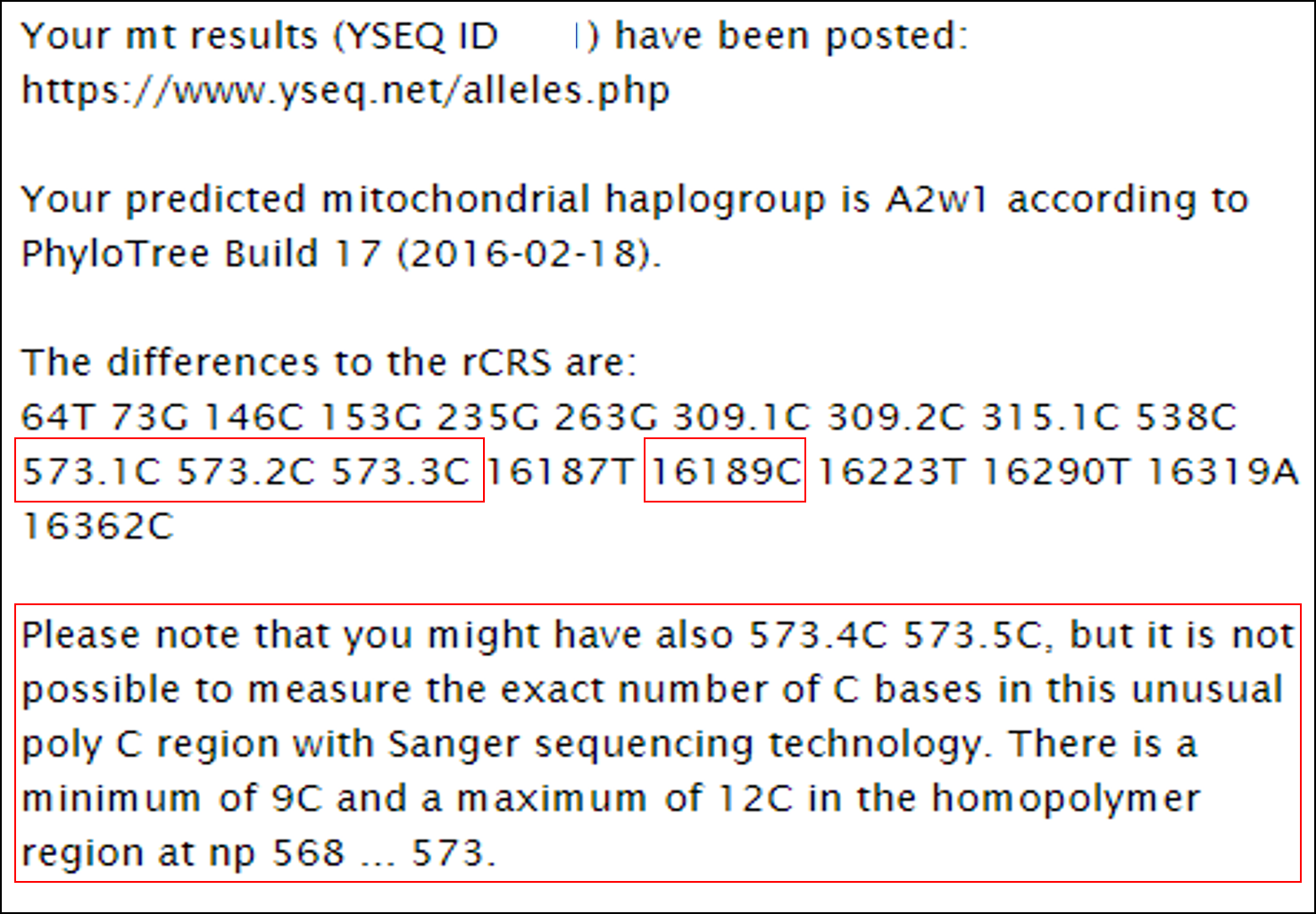 This exercise provides insight into my mtDNA line, and why I unexpectedly am not an mtDNA match to my mother despite being a normal atDNA match (yes, she’s my mother!).

The exercise also suggests that, as others have suggested, heteroplasmies should not be used in the calculation of genetic distance, unless the heteroplasmy reveals that there is no possible match. For example, in the following table, the first two conditions (wild-type and a heteroplasmy showing a C and a T) should show as an exact match between Joe and Victor (GD=0). The third condition, where Joe doesn’t have a “C” at 16189, should correctly be shown as GD=1.

Lastly, the exercise suggests that 573C insertions might potentially be ignored or downweighted when performing comparisons. For example, Joe and Victor might be shown as matches in the following comparison, with an asterisk or other indication of a potential issue in the poly-cytosine stretch at 573:

For more about mtDNA, check out the following blog posts: