This was discussed in a previous article about outliers, but it bears repeating.

When there is a possible outlier situation, I invoke “The Outlier Protocol.” Specifically, I have to try to determine whether the unexpected shared cM amount is due to the expected relationship actually being an outlier or whether the two people have another relationship. While the goal of the Outlier Protocol is the same for every analysis, the specifics of the analysis will depend upon the relationship involved, among many other factors.

Ignoring The Outlier Protocol and proceeding as if it is simply an outlier scenario is confirmation bias. When a shared cM amount is very low or very high, a red flag is raised and we must do our best to resolve that red flag using a combination of documentary research and additional DNA testing. Anything else is confirmation bias. 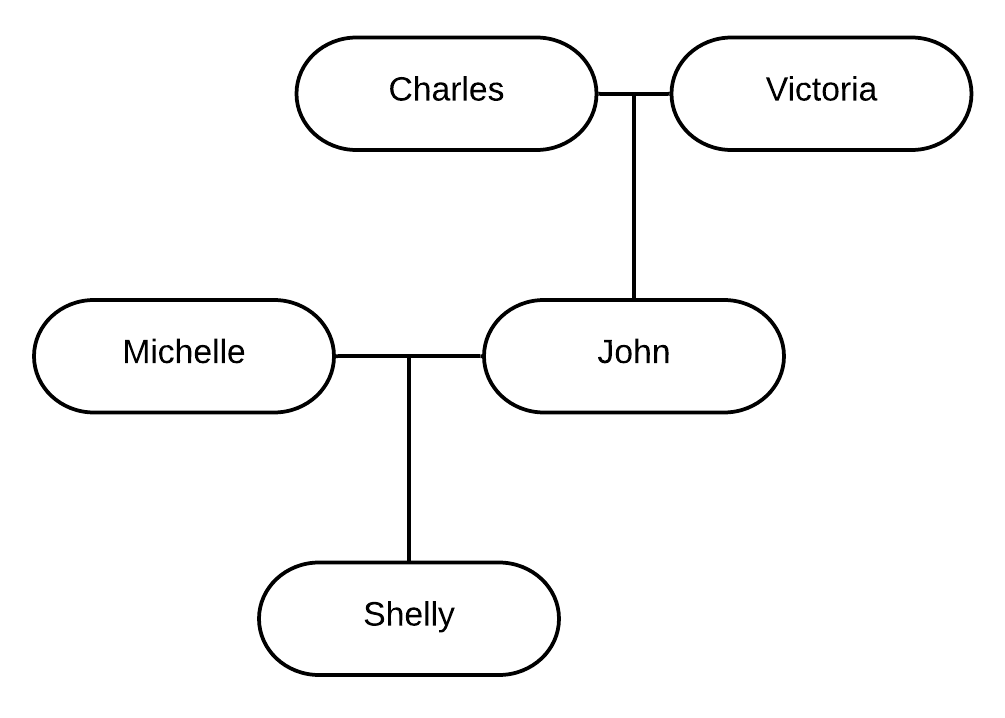 Everyone shown above has tested their DNA and transferred their results to GEDmatch Genesis.

What Amount of Shared cM Do We Expect?

We get 50% of our DNA from each parent (the actual amount will vary a bit because of company algorithms, the size of the X chromosome versus the Y chromosome, etc, but it is one copy of each chromosome for 50%). Beyond parent/child, however, relationships vary. For example, at the grandparent level, we know several things:

This post is about the variation within the 50% provided a set of grandparents.

So, on average we get 25% from each grandparent, although there can be considerable variation.

What Amount of Shared cM Do We Actually See?

Before we jump into how much Shelly shares with each of her paternal grandparents, here are some important facts for the analysis:

In other words, nothing about the family relationships are unusual. There’s no unknown or unexpected relationships.

However, Shelly shares the following amounts with her paternal grandparents:

The percentages were calculated by GEDmatch Genesis.

Both of these values are very far outside the range of the Shared cM Project.

I initially told Michelle, with whom I corresponded, that this was “essentially impossible” and that there must be some other explanation. Not only is it unlikely to occur, it is unlikely to actually be detected. Given the size of the human population and the size of the databases, there are actually very few grandparent/grandchild relationships tested.

Now, we know this is all John’s fault, right? John recombined the chromosomes that Charles and Victoria gave him, before he passed them down to Shelly. Based solely on the numbers, it appears that he didn’t do much recombination at all. And thanks to GEDmatch, we can visualize that lack of recombination. The pattern of matching shown by visualizing the recombination also helps confirm that Charles and Victoria are, in fact, the mating pair that produced John.

How do we visualize recombination? We simply compare Shelly to one or both of her grandparents using a chromosome browser!

Here’s a One-to-One comparison at Genesis of Shelly and her paternal grandfather Charles:

And here is a One-to-One comparison at Genesis of Shelly and her paternal grandmother Victoria:

Do you see the pattern? If the grandfather shares DNA at a spot, the grandmother does not, and vice versa. Everywhere there is a switch from one grandparent to the other, this represents a single recombination point created by John.

This DOES appear to be an extreme outlier situation rather than another explanation such as a different relationship. However, this would have been an extremely difficult case to examine without having all the family members tested, and without having a chromosome browser to review the recombination pattern.

But note that this post is NOT support for outliers. Rather, it is meant to emphasize that when you find a possible outlier, you must utilize “The Outlier Protocol” to determine whether it is an actual outlier or whether there is another explanation. Remember, the goal is to disprove a hypothesis, not to only gather evidence that supports the hypothesis. Anything else is confirmation bias!