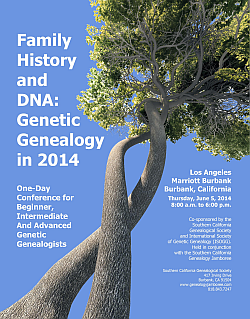 Last year’s “Family History and DNA: Genetic Genealogy in 2013” was the first of its kind and was a huge success  As a result, the Jamboree organizers have organized a second DNA Day, which will held all day on Thursday, June 5, 2014, which is the day before Jamboree begins.

The FULL schedule for DNA Day 2014 is HERE (Thursday Schedule).

The keynote speaker at Family History and DNA: Genetic Genealogy in 2014 will be Dr. Maurice Gleeson, a popular speaker and the organizer of Genetic Genealogy Ireland 2013, Ireland’s first conference on genetic genealogy.  I had the opportunity to speak with Dr. Gleeson at last year’s event (including about his interesting iCARA project), and he’s both engaging and extremely active in the genetic genealogy field.  I have no doubt his presentations and keynote will be fascinating.

I will again be presenting at DNA Day, a lecture entitled “Using Autosomal DNA to Explore Your Ancestry,” sort of the basics of using Autosomal DNA.  I’m not crazy about the 2:15 time spot, however, as I’ll be competing with Judy Russell, CeCe Moore, and Bennett Greenspan!

A Terrific Line-Up of Speakers!

In addition to my presentation, DNA Day at the SCGS Jamboree will feature the following speakers:

I’ll also be giving two other presentations, both related to DNA, at the regular Jamboree:

Here’s the full line-up of speakers for the 45th Jamboree, and it’s quite a list! I hope to see you there!