If you’re serious about genetic genealogy, you’ve heard of GEDmatch. The third-party site is one of the few ways to compare testing results among the three testing companies. The site

However, since GEDmatch is run by two incredible volunteers (Curtis Rogers and John Olson) with full-time jobs, the site has experienced server issues and downtime. Many have lamented that there was no monetization plan in place, but gave donations in hope that it would help the site grow.

This week, GEDmatch announced a monetization strategy, namely advanced tools that are only available to Tier 1 members at a nominal cost of $10/month:

Basic GEDmatch programs remain free and we plan to keep them this way. Donations help cover the costs associated with running this site, and will provide you with the benefit of using the additional Tier 1 tools for a period of time equal to one month for every $10 donated. You may use the ‘Donate’ button below, for a one-time donation of any amount, or the ‘Join GEDmatch’ button to establish a recurring $10 per month amount.

Once the month’s fees are paid, the following interface will appear: 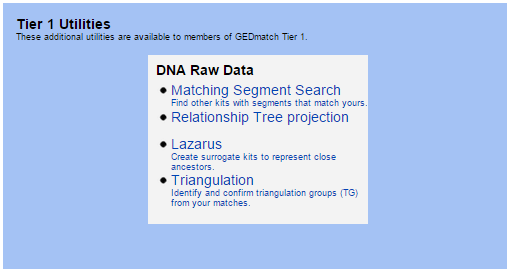 A brief description of the tools:

I’d like to focus briefly on the Lazarus tool.

Lazarus – Raising Genomes from the Dead

According to the Lazarus page, “[s]egments are included for every combination where a match occurs between a kit in group1 and group2. The resulting are combined to create the final kit.”

I decided to Lazarus my deceased grandmother’s genome using the following samples:

The algorithm processed the kits and came up with a list of resulting segments (below is an excerpt only): 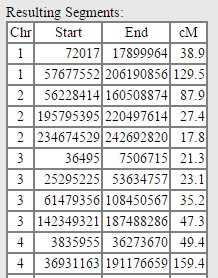 The kit was then available for one-to-one comparisons. To give you an idea of how the new kit was created, and how it affects matching and other uses, here are a few comparisons of Chromosome 1 ONLY of my grandmother’s Lazarus’d kit to other kits:

1. Lazarus’d Grandmother to her brother (used to create the kit):

2. Lazarus’d Grandmother to her son (used to create the kit):

3. Lazarus’d Grandmother to me (used to create the kit):

4. Lazarus’d Grandmother to an unrelated male (but, importantly, this male is paternally related to the son and daughter used to create this kit):

But I’m not sure about why there’s a gap to the right in my grandmother’s Chromosome 1. I’m still studying this and trying to figure out how the algorithm is working.

There’s still a lot to learn about Lazarus, please feel free to share your experiences!