With genetic genealogy the name of the game is collaboration, whether it is collaboration with other people or collaboration among the trees and records of our genealogical and genetic matches. Only when we collaborate can we generate the clues and information necessary to break through walls and recover the names of those missing ancestors.

We have multiple tools for collaboration of genetic matches. At GEDmatch and DNAGedcom, for example, we have many third-party tools that assist our efforts. The companies also offer tools that allow us to sift through our matches to find the clues we need. Family Tree DNA, for example, has an In Common With (“ICW”) tool and a Matrix tool that allow users to see what matches they share in common with another person. 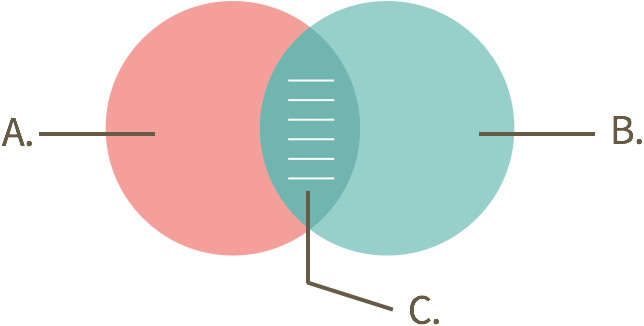 On August 26th, AncestryDNA announced the “Shared Matches” tool, which is an ICW tool that shows you all the close matches you share in common with someone (usually, but not always, a genetic match) in the AncestryDNA database.

You can check for a Shared Match with any of your genetic matches, all the way to the last person in your list of matches. You can even check for Shared Matches with people who have no tree or only a private tree! However, because of the limitation discussed below, you will expect to find fewer and fewer Shared Matches as you work your way down your list.

Before we launch into this, be sure to see “New AncestryDNA Common Matches Tool: Love It!” by Diahan Southard at Lisa Louise Cooke’s Genealogy Gems for some absolutely beautiful illustrations!

There is a very important limitation of Shared Matches that has created most of the confusion about the new tool: the tool will only show fourth cousins or closer. In other words, for a Shared Match to show up, that Shared Match must be a fourth cousin or closer to BOTH you and the person you are checking for shared matches with.

Let’s use an example. My name is Blaine, and I have a great-aunt named Amy who has tested at AncestryDNA. I see Amy in my match list, so I click on the VIEW MATCH button to see Amy’s profile. There, I click on SHARED MATCHES to see the shared matches we have in common. I get a list that includes Chris. In order for Chris to appear in that list, he must satisfy two criteria:

If Chris is a distant cousin to Amy, he won’t appear in our Shared Matches list EVEN IF he is a match shared in common with Amy and Blaine.

In the follow graphic, which works off the same example, Blaine and Amy both have an array of matches. Some of those matches are shared in common, as shown in the region highlighted in red. Of those, only Chris and David are fourth cousins or closer to BOTH Blaine and Amy, so only Chris and David will show up in the Shared Matches list. While Blaine and Amy share Gil, Hu, and Jill in common, they are all more distant matches and won’t show up in the Shared Matches list. Further, close matches like Franny and Egbert won’t show up because they aren’t shared by both Blaine and Amy. 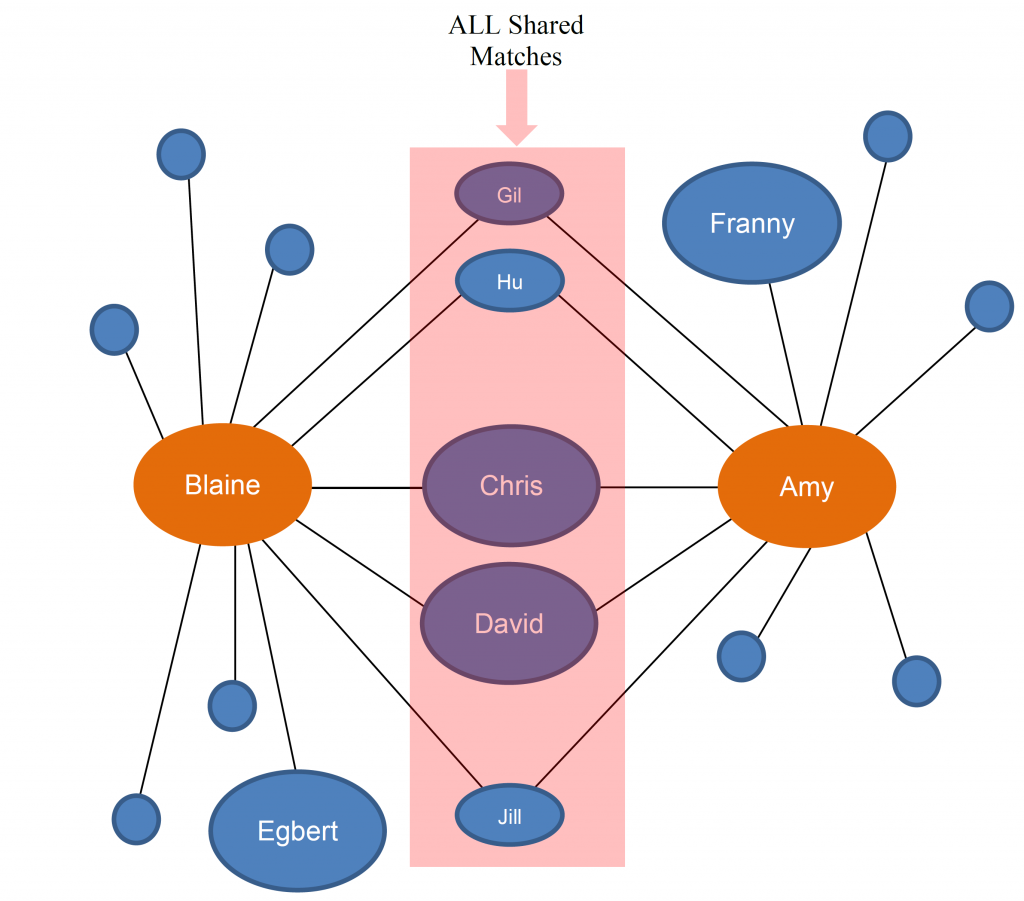 As you can see from the above, do not use the absence of a match from an ICW group as evidence!

Amy, Blaine, and Chris create a “Shared Matches Group.” Note that this is NOT a triangulation group, and is not even a pseudo-triangulation group. But it is a group nonetheless, and should be explored for clues.

As one commenter pointed on in an ISOGG Facebook group thread, once you can show an ICW group to a match, they might be more likely to share information, upload to GEDmatch, or otherwise collaborate.

Why Fourth Cousins or Closer?

AncestryDNA explains that “Shared matches work best for closer relationships so you’ll only see “high confidence” matches (4th cousins and closer to each of you) in the list.”

There are certainly plusses and minuses to limiting Shared Matches to fourth cousins (“4C”) or closer.

On the one hand, for those without significant endogamy, limiting Shared Matches to the 4C or closer range results in greater confidence that the Shared Matches Group is based on a common shared ancestor. Of course it’s not a guarantee, but it is more likely than a scenario where you’re adding in much more distant relatives. The more distant the relationship, the more opportunity for a relationship through multiple lines, and/or through different lines.

On the other hand, several people have been underwhelmed by the new tool because they have found very few ICW matches, usually due to having very few genetic matches at the 4C or closer range. Hopefully everyone’s results will continue to improve as the database continues to grow.

Now remember, ICW status among three (or more) people IS NEVER confirmation or proof that ALL three people share common ancestors, much less that they share the same segment of DNA. (Although I’m a proponent of Genetic Networks so sharing the same segment of DNA (“triangulation”) is not always a requirement; however, ICW alone is never sufficient without more).

Using the example above, Chris may be related to Blaine and Amy through the same line or through unrelated lines. Unfortunately, this problem can be exacerbated by endogamy.

During the discussion of Shared Matches on the ISOGG Facebook group, one commenter noted that you could check your shared matches not only with your genetic matches, but also with anyone in a DNA Circle or a New Ancestry Discoveries group.

In the NAD below, for example, the test-taker is only genetically related to people in the orange circle groups. However, the test-taker can check for Shared Matches ANYONE in any of the circles: 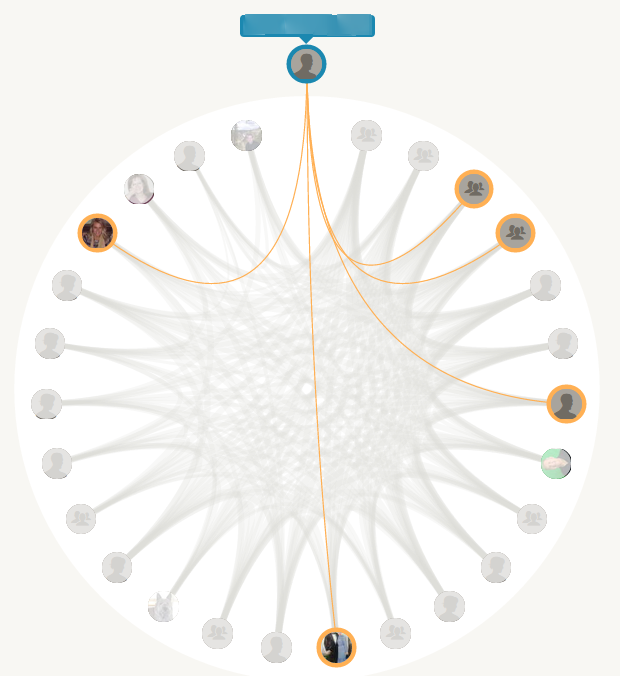 Clicking on one of the NAD members with whom you don’t share DNA will look like this:

Not surprisingly, most of the time you won’t share a match ICW these people. However, once in a while you will, and that might help you solve the mystery of the NAD.

Several people have indicated that they use the AncestryDNA Shared Matches tool together with the Snavely ICW feature to expand the ICW analysis.

Do you have any other uses or successes with Shared Matches? If so, feel free to leave a comment below.

Nope, It’s Not a Chromosome Browser…

This is not a chromosome browser and you won’t get segment data. But that doesn’t mean that the Shared Matches tool is useless or that it can’t provide valuable clues. Indeed, many people have already posted about how the tool has helped them.

So beware the naysayers, and wring this tool out for everything it’s worth!