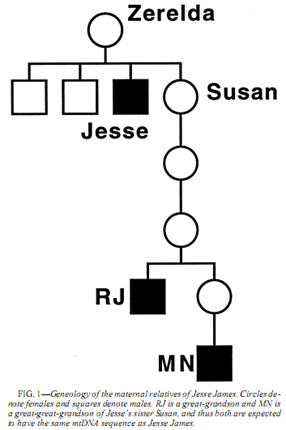 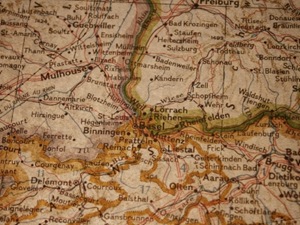 “Around 1709, the Rhineland-Palatinate region between what is now known as Germany and France was highly contested by each side. At least 13,000 residents left for Holland and London. The English sent them on to America where close to 300 families, led by the Reverend Joshua Kocherthal and the Reverend Johann Frederick Hager, settled in the Hudson River Valley, most noticeably in Saugerties, New York.” ... Click to read more! 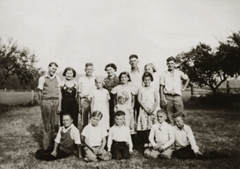 Many people do not realize that the genetics of the future will rely heavily on the work done by previous, current, and future generations of genealogists. Researchers hoping to uncover links between a disease and a particular gene or mutation often recruit entire families or use compiled genealogical databases for information. Just a few of the recent examples of researchers benefiting from the work of genealogists include:

In honor of the contributions that genealogists have and will make to scientist’s understanding of the genetic basis of disease, and in honor of the many unique and well-written genealogy blogs, I created The Genealogists, a Feedburner network (subscribe via RSS here). The network, which helps unite genealogy bloggers and introduce new blogs to readers, currently has 18 members: ... Click to read more!

Car manufacturer Buick and the Generation Network’s Ancestry DNA have joined together to offer contest winners the “chance to discover your heritage.” To enter this contest, just go to buick.ancestry.com. You’ll also find a short video there about the PBS series African American Lives 2.

Ten first-place winners with receive a free DNA test kit from Ancestry DNA. An additional 1,000 winners will receive a “Family History Kit” which includes a copy of Family Tree Maker Essentials software, a DVD of African American Lives (not sure if it is this year’s or last year’s) and a copy of “In Search of Our Roots: How 19 Extraordinary African Americans Reclaimed Their Past.” I personally would enjoy either prize. ... Click to read more! 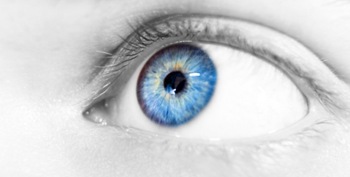 Researchers at the University of Copenhagen suggest that a mutation that arose around 6,000 to 10,000 years ago was inherited by every individual who has blue eyes (original study here). This mutation, located within an intron in a gene called HERC2, reduces the activity of a neighboring gene called OCA2. The researchers located the same mutation in 155 blue-eyed individuals from Denmark as well as in 5 individuals in Turkey and 2 in Jordan. From ScienceDaily:

“‘Originally, we all had brown eyes,’ said Professor Eiberg from the Department of Cellular and Molecular Medicine. ‘But a genetic mutation affecting the OCA2 gene in our chromosomes resulted in the creation of a ‘switch,’ which literally ‘turned of’ the ability to produce brown eyes.” ... Click to read more! 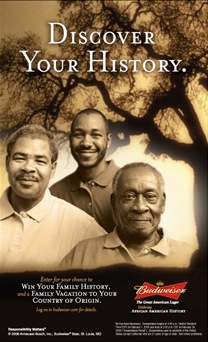 â€œOne of the most basic human desires is to understand who we are and how our family is woven into the broader, historic context of humanity,â€ said Johnny Furr Jr., vice president, Community Affairs and Supplier Diversity for Anheuser-Busch, Inc. â€œWe at Budweiser are proud to offer a lucky family the chance to embark on this remarkable journey of discovery. We hope to inspire others to use todayâ€™s technology to learn about their ancestors and region of origin.â€ ... Click to read more!

GenomeWeb Daily News announced on Friday that DNAPrint Genomics is being purchased by Nanobac Pharmaceuticals (I’ve written about DNAPrint here and here, including about their Doggie DNAPrint product). Here is the press release from Nanobac.

DNAPrint had a big year in 2007 with a number of partnerships and new products, and many people have forgotten or were unaware that the autosomal genetic genealogical tests offered by DNAPrint’s AncestrybyDNA are just a small part of the company’s business. From the Nanobac press release:

“DNAG’s primary objective has been, and Nanobac’s primary objective will be, to develop progressive theranostics drugs, which combine extensively modeled drugs with genomics-derived intelligence to create more economical and powerful drug/test combination products with superior performance parameters. DNAG’s flagship product, PT-401, is expected to result in more effective treatment of anemia, and its Protectin(TM) (CD-59) diagnostic test is expected to allow patients and their physicians to more effectively manage the risks and treatment decisions for diabetes. DNAG supports its clinical programs, in part, through the sale of consumer genetics tests genotyping services on a contractual basis.” ... Click to read more!

According to some sources, genetic genealogy testing rises considerably during February, which is Black History Month (as I wrote about last February). Part of this might be due to last year’s very popular TV show “African American Lives” on PBS. Starting next week (on the 6th) is the first half of the latest version of the show, “African American Lives 2.” I’ll be watching, and I think most of you will be interested in the show as well.

In anticipation of this series, Diverse Education has written an article entitled “The Value of Knowing Where You Come From.” The author of this article, Cassie Chew, recently interviewed me and a few of my quotes made it into the article. The article wonders if there is a possible genetic explanation for behaviors that run in families. For instance, one of Oprah’s ancestors appeared to have built a school on his land, and Oprah recently opened a school in South Africa. Is the appreciation of education genetic? ... Click to read more!